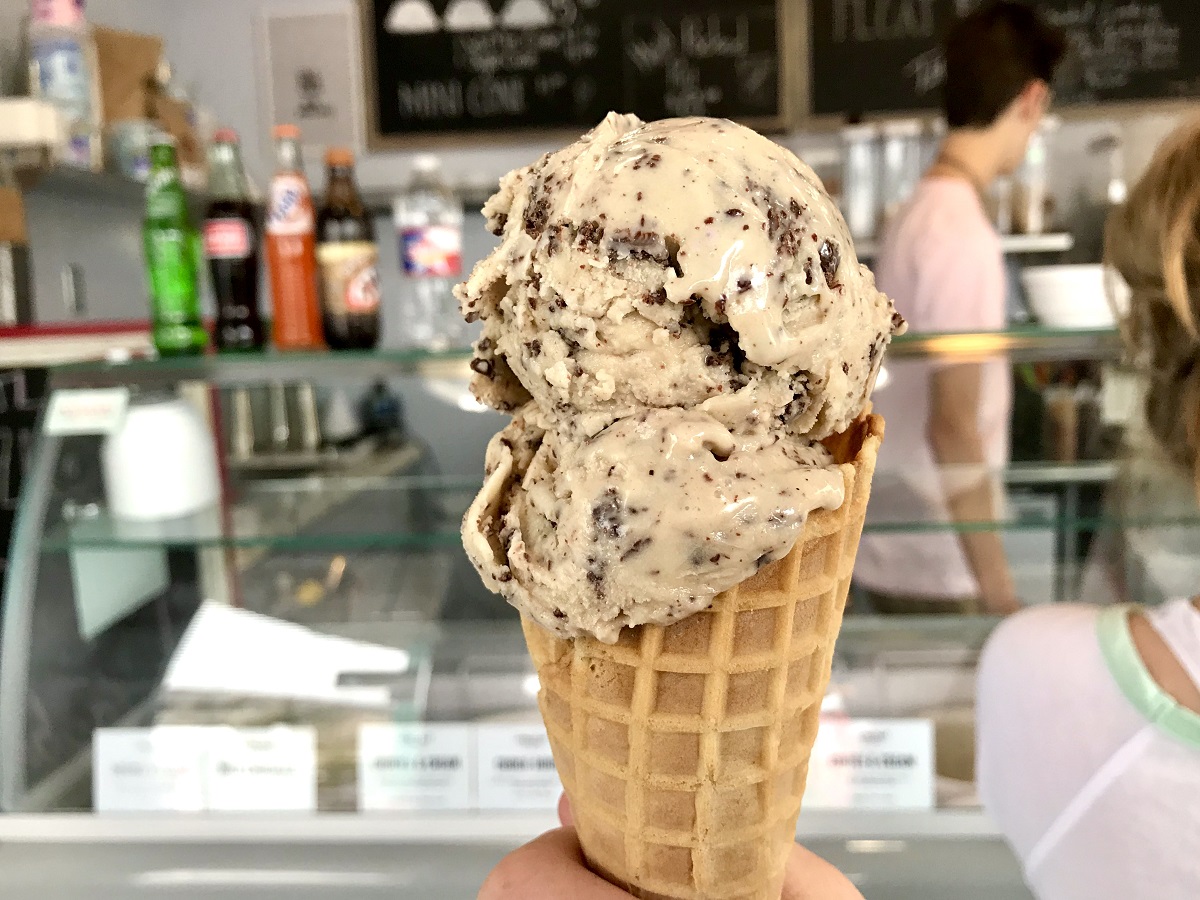 I learned of Just Ice Cream, the tiny ice cream shop inside Olde Crow Station in downtown Benton, a couple of months ago from a reader of my blog. I love little mom-and-pop places, or, in this case, the husband-and-wife team of Jon and Tia Wind. The two are new to the food business, but their story of how Just Ice Cream came to be is a good one.

“We were vacationing at the beach about seven years ago, and Jon looked at me and said, ‘We need to move down here and sell ice cream on the beach. We could get a food truck and call it, Just Ice Cream.’ We were seriously trying to make it a retirement plan for 10 to 15 years down the road. In November of last year, Jon said, ‘Ya know, I would be ok if we ended up staying here and making this a brick-and-mortar store.’ So, we changed our little retirement plan and started dreaming. In February, we went to the town hall meeting to see what the new mayor had plans for the community and to mingle with some friends who were also going. Damon Helton, owner of Barefoot Bend Farm and Olde Crow Station, was there. We struck up a casual conversation and mentioned our plan for an ice cream shop. He immediately invited us to Main Street Station, where he was setting up his farmers market and showed us a space he had available. Within 20 minutes, we had our brick-and-mortar. And by April 1, we were open for business,” said owner Tia Wind.

The space, as I would come to find out when I paid it a visit in mid-July, was small but very cute. All of the ice cream is via Loblolly Creamery, and after having a scoop or two, I was excited to tell others about Benton’s fairly new ice cream shop.

“That little spot was perfect to start out. We knew we would eventually be moving to a bigger space but thought it would be at least a year. We figured that we’d give it a full year to experience the slow season and see where it would lead, but the universe had other plans. Damon also has a couple buildings that he owns downtown, and one became available out of the blue. Boom. Now we’re in a nice large space with central air and indoor bathrooms,” says Wind.

Well, you know I had to see the new place for myself. What I found was a beautiful shop in the heart of old town Benton, a spot oozing with charm, character, and a ton of ice cream flavors.

“We are incredibly excited about our new space! We want to create a spot where kids can come hang out after school, moms can come meet up with each other while their kids are at school, people can meet up to discuss business, and families can sit and enjoy each other.”

These are exciting times for the Winds and for the growing Benton food scene.

“We are very happy to be downtown in Benton. There’s a buzz that’s going on right now down here, and it’s palpable. With Stated Apparel opening their amazing new store and renovations at The Palace bringing in Baja Grill and another restaurant, the landscape is changing, and Benton is waking up. We have such a wonderful walkable, shoppable downtown and we are psyched out of our minds to be a part of it.”

Sounds like Just Ice Cream has found a permanent home.

Besides Loblolly and Will’s Cinnamon Shop, Just Ice Cream has also partnered with Red Light Roastery along with Liz Bray, owner of Leave it to Liz, who is heading up the baked goods. Patrons can expect a growing and changing menu, including hot chocolate and marshmallows during the winter months. Jon and Tia are also working on a getting a beer license, which will bring locally made craft beer into the fold, perfect for enjoying on the patio/deck area in the back that’s in the process of being built.

It took me way too long to try out Lindsey’s BBQ & Hospitality...

It is not easy to spot Arkitchen, the sharable commercial kitchen tucked...

With blazing outside temps, now is the perfect time to check out one of...