Read More about this safari issue.
0

Building the U of A Mascot Program – Go Big Red 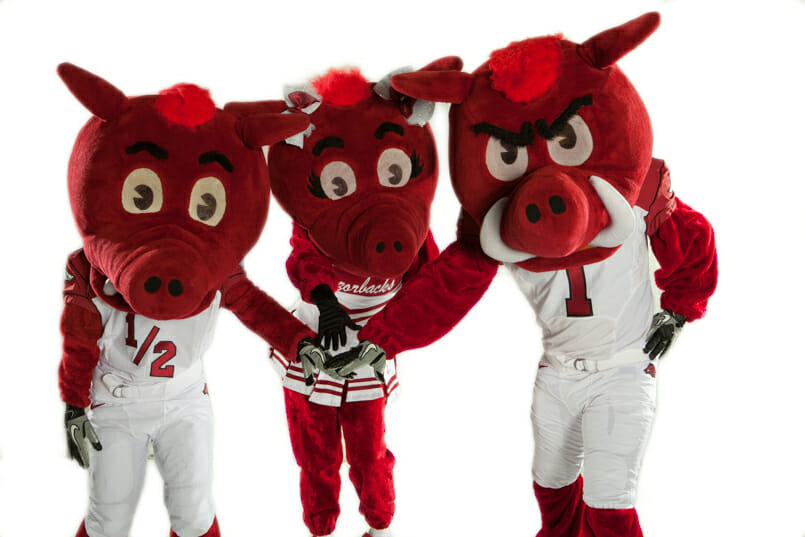 In 2012, Nail was honored with the Colonel Moeller Administrator of the Year Award by the Universal Cheerleading Association, and the growth of the program is a visible example of the impact the program makes on fan experience at Razorback athletic events.

“Big Red” is the traditional mascot for the University, representing the fighting spirit of the Razorbacks. He sets the tone at every game with a swaggering, self-confident attitude that inspires fans and athletes to bring home a win and “CALL THOSE HOGS!”

“Sue E.” represents her fellow female Razorback fans with a sassy and classy spirit that makes it easy to tell she’s from the great state of Arkansas. She’s known to fans for her costume changes and outstanding dancing ability.

“Pork Chop” is a “kid-sized” mascot who was created to appeal to younger fans. You might notice that his facial expression is less intimidating than that of Big Red. This was done to give young fans a mascot they can feel more comfortable interacting with at community fan events and games.

“Ribby” is the #1 Razorback baseball fan. He attends all the games and wears a uniform that echoes those worn by the team. His stats may not be the highest in the SEC, but his amazing enthusiasm is always “out of the park”.

“Boss Hog” is the most recent addition to the squad, having joined the squad during the 1998-99 football season. His bouncing, inflatable antics on the sidelines and during time-outs and half-time shows are always popular with crowds.

Each student selected to represent the University of Arkansas on a Razorback Spirit Squad is provided with a Spirit Squad Program scholarship. Just like the students on the cheer and pom squads, the mascots have to audition annually to earn their spot, even if they were part of the squad in the previous year.

Before auditions, students are briefed about the program and the requirements of time and talent that will be expected of them. Every mascot goes to every game – at home and away. Unlike the cheer and pom squads that have two teams each that perform on alternating weekends, the mascots are always on the bus, so to speak.

Audition guidelines are communicated to hopefuls to help them plan their individual audition skit. The skits are judged on utilization of the suit, ability to communicate the individual character they are auditioning for, overall show of University of Arkansas spirit, and creativity. In addition to the audition, each student is scheduled for a personal interview with the Spirit Squad staff and selected former squad members. Aside from the ability to perform, each student has to be comfortable with no vocal interaction for the entire time that they are wearing the suit. They have developed a language of hand signals that are used by the student in the suit and their “handler” to communicate with each other.

Nail explained that while many other schools with individuals performing as mascots keep the student’s identity a secret, it is her belief that that the young men and women in Razorback mascot suits deserve recognition for their hard work. Along those lines, we are excited to help promote a national competition that you can help Big Red win! The Capital One Mascot Challenge is an annual contest that relies on fans to vote and complete challenges on social media to push their favorite mascot to the top. Voting can be done in three ways – a simple single-click vote (50 votes are allowed each day), or by completing one of two challenges (or both!) that count for 50 or 100 votes. Challenges change each week, and weekly winners are posted on the website, so vote today, then go back next week to do it again.

For more information about the Razorback Spirit Squads and Mrs. Nail’s impact on University of Arkansas fan experience, check out this video: