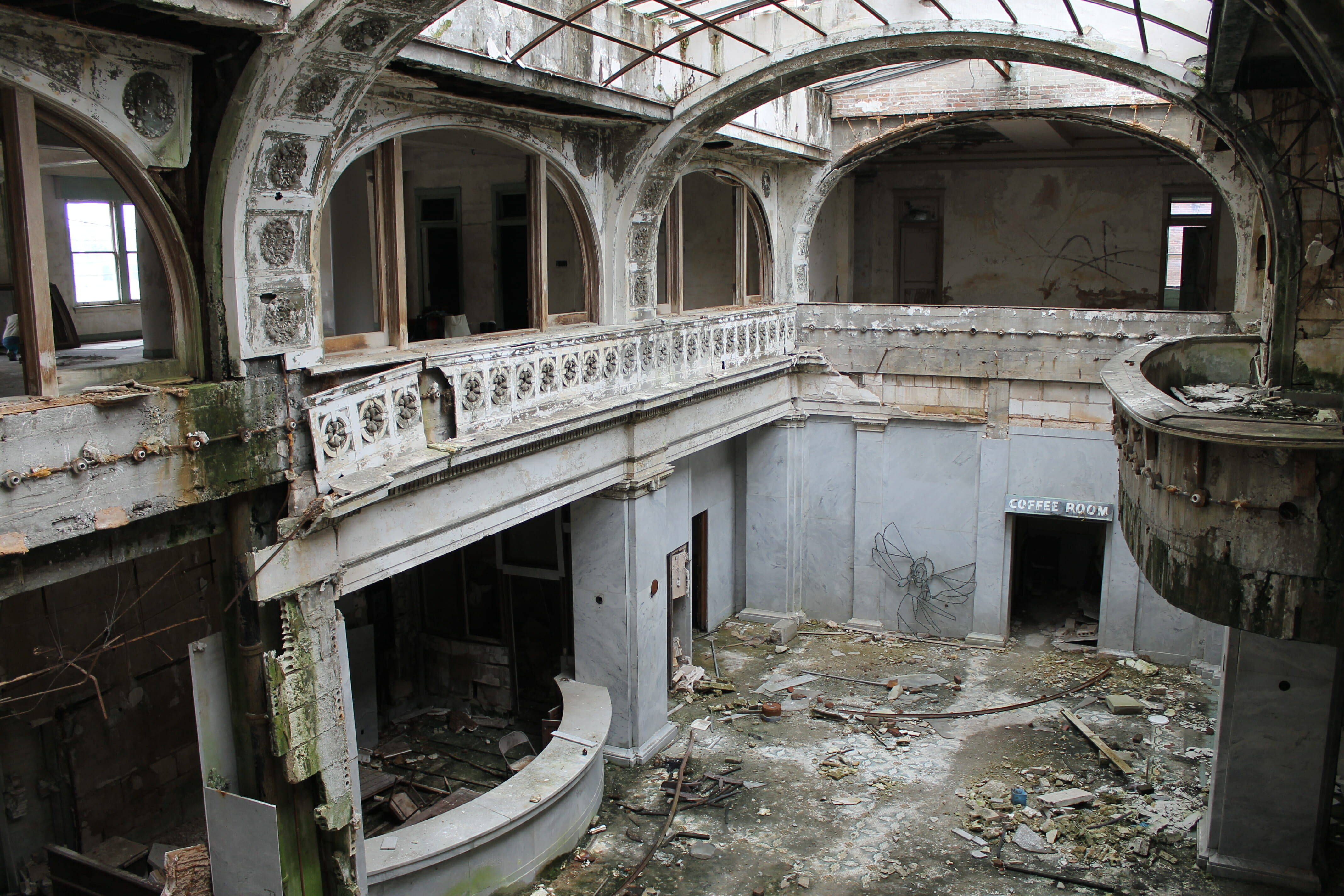 Each year, the Historic Preservation Alliance of Arkansas chooses a handful of buildings and properties across the state that are in imminent danger of destruction in the hopes that the community will join in the effort to save these historic places. Visit post one in the series of Arkansas’s Most Endangered Places here.

In 2015, Preserve Arkansas listed Pine Bluff Commercial Historic District as one of their most endangered places. Many buildings in what was once the third largest town in Arkansas had been abandoned, fallen into disrepair or simply collapsed. The historic district included the Masonic Temple of Pine Bluff and the Hotel Pines. The Masonic Temple was built in 1902 under the leadership of African-American Moses A. Clark, an ex-slave. It was financed by African American Masons throughout Arkansas. The proud, four-story red brick building served as the meeting place for the African American Free Masons of the region and as a business center for a thriving downtown district.

The Masonic Temple of Pine Bluff was the largest building in town at the time and housed several businesses, including the Unity Bank and Trust Company, which was Arkansas’s first African American owned bank. Pine Bluff had become a place of refuge for freed slaves during the Civil War. Many of those refugees stayed on and created a prosperous African American business district within the city and  became home to some of Arkansas’s most successful African American citizens.

The Masonic Temple’s structure is still sound, unlike  many buildings downtown, but water moisture buildup is damaging the interior. The building is privately owned and the owner hopes to be able to renovate it and return it to a thriving multi-use building in the heart of downtown Pine Bluff.

The Hotel Pines in Pine Bluff was once one of the premier hotels in Arkansas. Built in 1912, the hotel was the brainchild of several prominent members in the community who desired to increase commercial traffic to the southern part of downtown Pine Bluff. The hotel was built near the train station and passengers became its main guests. The investors spared no expense and created a lavish building. Famed architect George Mann, designer of the Arkansas State Capitol, laid out a six-story U-shaped structure that included a barrel vaulted lobby with a glass ceiling to allow light to flow across the pink marble columns and classical architecture. It was a building reminiscent of Europe and the hotel thrived for many years as a gathering place for social events, conferences and travelers.

When the railroad ended passenger service in 1968, it dealt a fatal blow to the Hotel Pines as well. The hotel closed in 1970 and has remained mostly abandoned, despite a few attempts to house other businesses and save the building. With gaping holes in the glass roof over the lobby, the structure is deteriorating quickly and is in danger of following in the footsteps of several other downtown structures in Pine Bluff which have collapsed due to neglect. The once magnificent building is for sale, but it will likely take considerable financial investment to return the Hotel Pines its former glory.

When Preserve Arkansas releases its list of Endangered Places each year, the hope is that the local communities will become involved in saving and repurposing or renovating the buildings, whether through the city, local organizations, or the efforts of private citizens. In some cases, Preserve Arkansas can provide support through grant assistance. However, some properties are more difficult to work with, especially those owned by individuals who may not have the motivation or economic means to pursue restoration. Some of the buildings on the Endangered List have happy endings. Others don’t.

The Brittnum Rooming House hit the 2015 list of Most Endangered Places already in rough shape after years of neglect. Constructed in 1913 as a large family home, it became a well-known boarding house among the African American community in Little Rock by the 1930s. The boarding house was home to a wide variety of workers in the community and also became known for its vibrant atmosphere. Perhaps its most famous tenants were a few African American players on the Arkansas Travelers team. The owner’s family had held the property for over fifty years, but the house had been vacant since 2002 and was rapidly deteriorating.

The owner applied for recognition by the National Register of Historic Places, but the application was denied. The structure had undergone too many changes to qualify for the register. Despite attempts to gather finances and momentum to save the Brittnum Rooming House, it was demolished in July 2015, only months after being placed on the Most Endangered Places list. This is a reality many of the historic structures face, and the very reason Preserve Arkansas publishes their Endangered Places list each year. It’s too late for the Brittnum Rooming House, but perhaps it’s not too late for other properties with historic and cultural significance in Arkansas.

In the next post, we’ll visit two more endangered properties from the 2016 list hear of a Most Endangered Places success story. Visit preservearkansas.org for more information on these properties and how to get involved in preservation efforts.