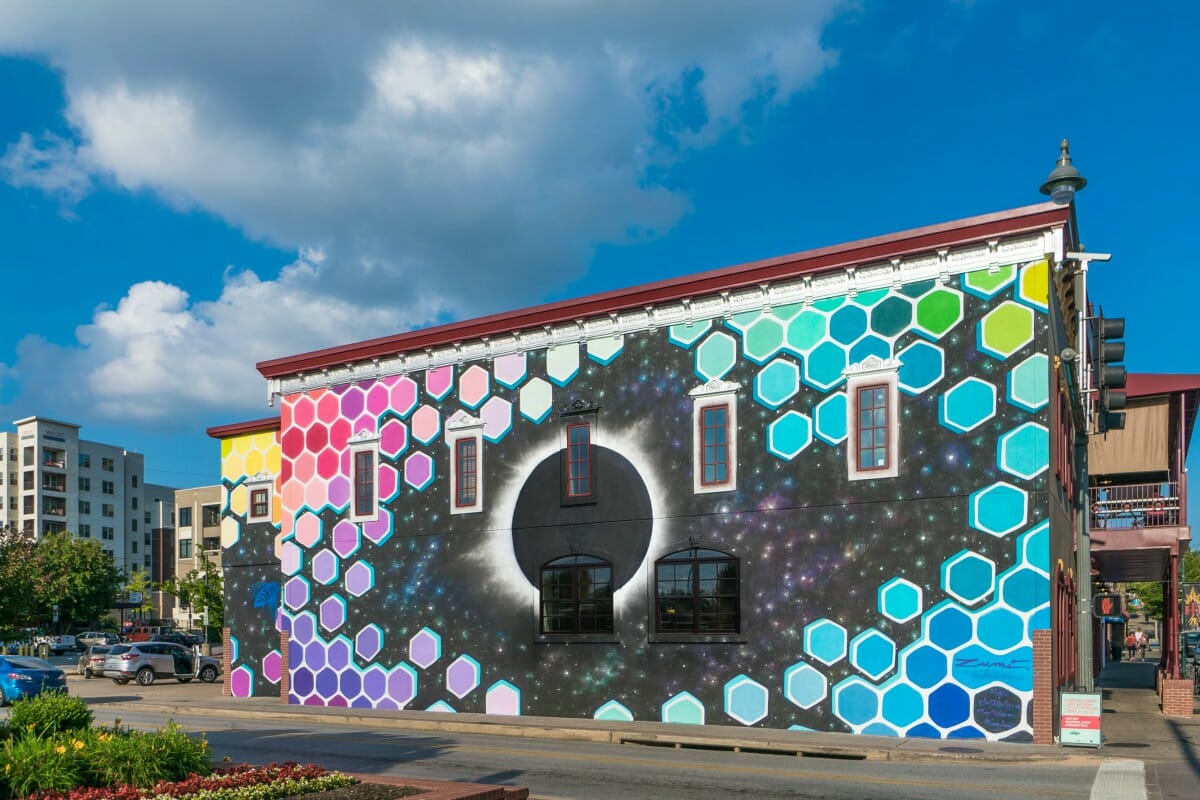 Northwest Arkansas is the home of the Razorbacks, the University of Arkansas and Wal-Mart. The Ozark Mountains also provide some of the state’s best hiking, camping and other outdoor recreational opportunities. Recently, though, Northwest Arkansas is becoming known for its art initiatives. 2017 brought an explosion of public artwork into the area, and 2018 promises to continue the trend.

Last summer, the city of Fayetteville partnered with JustKids, a global creative house, to create Green Candy, a public art initiative that brought local artists and international ones into Fayetteville. The artists created murals and other pieces of art around the theme of sustainability and waste. The results of the week-long initiative didn’t disappoint. Local artist Jason Jones created Fresh Air, a giant rabbit located just off of Center Street on the Razorback Greenway. He also has two other murals that can be found in downtown Fayetteville, Enjoy Local and Shop Local.

Argentinean artist Marina Zumi painted Eclipse on the side of Hog Haus Brewery overlooking West Avenue. You can find all six of the Green Candy art initiatives near the Fayetteville Square.

If you were around Fayetteville in August of 2016, you might have seen Puerto Rican artist Alexis Diaz high above College Avenue as he brought a massive owl mural to life. Diaz’s towering mural was part of The Unexpected, Ft. Smith’s urban contemporary art festival, also held in conjunction with JustKids.

Downtown Fayetteville isn’t the only place to discover amazing public art. The Razorback Greenway is fast becoming a venue for murals, sculptures and other displays. The 36 miles of trails connects Fayetteville, Springdale, Rogers and Bentonville and holds its own growing array of art. One of the newest murals covers the exterior wall of a tunnel on the Tsa La Gi trail, a spur trail that runs parallel to Martin Luther King Jr. Boulevard. The mural pays tribute to the Indians forced to march on the Trail of Tears, which ran along the same path as the trail.

If you head north on the Razorback Greenway from Fayetteville, you’ll encounter other interesting works of art. “Uptown Fayetteville” has a series of murals near the Uptown apartment complex and Mud Creek Trail system. Local artist Steve Adair created the Dapper mural, which draws on the nostalgia of life in the 1950s. Local artist Olivia Trimble’s eye-catching Uptown Quilt is a colorful mural of quilt patterns and part of her Quilt Square Project.

As you head north out of Fayetteville, don’t miss the mural of a boy fishing with a dog by his side on the north shore of Lake Fayetteville. Springdale has art on the mind lately, too, with its Springdale Art Initiative. Downtown Springdale features a number of murals, including the walls of the Arts Center of the Ozarks and the Jones Center for Families.


Artist Jane Kim, of Ink Dwell, creates art inspired by her love of nature. She desires to protect endangered species while drawing attention to their migratory paths that often cross our own but go unnoticed.

The newest installation of art in Springdale comes from Springdale High School students, who created an array of colorful fish to decorate the fence at the Shiloh Museum and overlooking the greenway trail. As you head past the airport, you can’t miss the giant butterflies taking flight in Kaleidoscope by San Francisco artist Jane Kim. The mural is part of the Migrating Mural Project, which shines the spotlight on endangered animals by featuring murals along the migration pathways of each species.

Rogers is not to be outdone by its neighbors to the south and also features a growing number of murals, including the classic Coca-Cola mural found on the corner of Walnut and 2nd Street.

You can find an interesting mural on the side of an old railcar in The Railyard Bike Park.

A walk around historic downtown Rogers will reveal more surprises, including The Bleu Girl at the Urbanbleu hair salon on Elm Street.

The short distance from Rogers to Bentonville brings you into the heart of art in Northwest Arkansas. With Crystal Bridges Museum of American Art leading the way, public art has become an integral part of the city, and you don’t have to look hard to find a mural, sculpture or other art to color your day. Most of the artwork is within walking distance to a trail as Bentonville has created a trail-friendly atmosphere.

Look for this comic book inspired mural near the Bentonville square.

This mural resides on the Peddler’s Pub building on SW A Street, where you can grab a bite to eat whether you’re walking around downtown or biking the trail.

As you roam throughout Northwest Arkansas, keep your eyes open, as artwork might appear in the most unexpected places, from storm drains to utility boxes to trail tunnels. Public art in Northwest Arkansas has never been so visible and so fun to discover.