I love writing about Arkansas-made products. It is an opportunity to not... 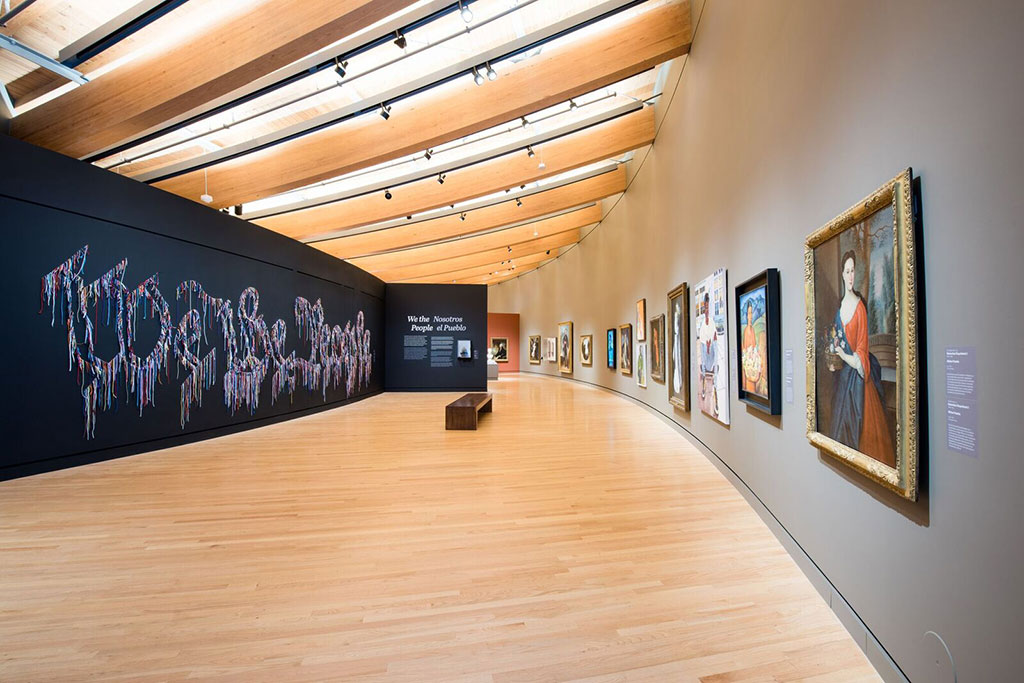 If George Washington could be having a conversation with a modern young black man in a sweatshirt, he’d be having it at Crystal Bridges Museum of American Art in Bentonville.

Inviting diverse artists and their works into the conversation is one of the central ideas behind a major overhaul of several gallery spaces at Crystal Bridges, the first re-imagining of the permanent collection galleries since the opening of the museum in 2011.

The Early American Art Galleries closed in January in anticipation of these changes, but the redesign of the gallery space has been in the works for about two years. The Early American Gallery opens to the public today (March 16).

“It certainly didn’t look like this before,” Mindy Besaw, curator of American Art for the museum, told a group of visitors gathered for a sneak peak on Thursday (March 15). The decision to make changes and update the dynamics of the collection came in part because of feedback from patrons over the last six years.

Works by black artists now hang alongside familiar works visitors have seen over the years. There’s a greater emphasis on Native American art as well, and all works in the Early American galleries now have descriptions written in English and Spanish.

“We wanted to bring in more contemporary works to have a conversation where it made sense,” Besaw said.

But the collection has been enhanced in ways beyond a focus on diversity. Each of the works now features a written description. Besaw points to the quirky works “School Rules” by William Holbrook Beard as an example. Visitors can read about it.

The new design splits the permanent collection into several sections. The first looks at “People on the Move.” Another focuses on “Networks and Power,” and still another looks at the “Painters of Modern Life.”

Interactivity is also a focus, as digital consoles now augment several works. An old favorite “Winter Scene in Brooklyn” by Francis Guy, now has an interactive screen next to it that explains what Brooklyn might have looked like in 1820 when the painting was finished.

But the highlight of redesigned space might be the salon-style portrait and landscape walls, which showcases the collection of the museum. Like in the redesigned early American period, more contemporary favorites such as Andy Warhol’s white-hued portrait of Dolly Parton from 1985 rests next to “The Midinette” by Alfred Henry Maurer from 1902.

A large-format interactive display informs patrons which works they are looking as their eyes move around the walls. Interactivity is a key element elsewhere, too. Stations have been established for a figure drawing activity, and a palette decoration station now exists as well.

Walls were removed and reinstalled to accommodate the design project. Lighting changes draw visitor’s eyes in new directions, and a subtle graphic element on walls make the artworks pop. The idea was to make the traffic flow more intuitive.

Because the works are part of the permanent collection, Besaw says the gallery can change again based upon the reception the new configuration receives. It will also change based on the availability of loaned material. A pair of newly installed Native American works are due back to the Nelson-Atkins Museum of Art in Kansas City, Missouri, in six months, for instance. Other loans to fill the curatorial gaps presented by the departing materials are in the works.

The Early American Art Galleries remain free and are accessible anytime the museum is open.