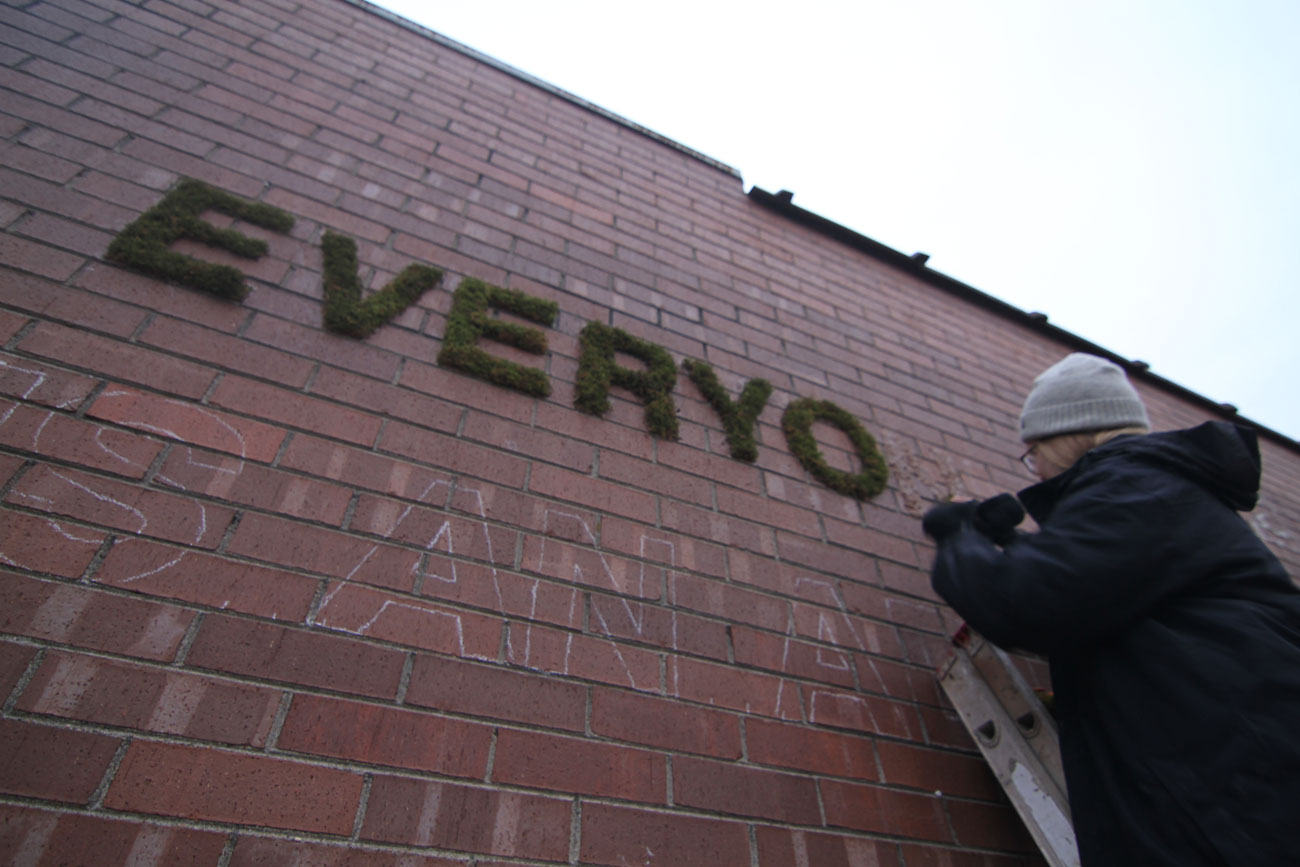 You could say the public art scene is alive and well these days in Fayetteville. You could even say it’s growing.

That’s thanks to a new series of art installations popping up around town by University of Arkansas student Livvy Pierce that feature lettering on downtown buildings made of living, growing moss.

Pierce has so far finished two of the installations in Fayetteville, and is working on a third this week on an exterior wall of Maxine’s Tap Room on Block Avenue. The other two installations are already on display, locatd along the Frisco trail near Arsaga’s at the Depot, and on the exterior of High Roller Cyclery (322 W. Spring St.)

Her series, titled Things I am Learning in My 20’s is part of her senior thesis at the University of Arkansas, and is intended to take concepts and influences Pierce has experienced, and bring them together in a new context.

The installations, each of which has taken Pierce about 10 hours to complete, feature quotes from female authors that are meaningful to Pierce. The one at Highroller, for example, says “We’ll all become stories,” which comes from a Margaret Atwood story.

The quote near Frisco Trail “Feel all the shades” comes from Sylvia Plath.

The third installation Pierce was working on at Maxine’s on Thursday afternoon when we stopped by is going to say “Everyone else my age is an adult,” which is also an Atwood quote.

Pierce said she likes the idea of borrowing ideas from others, and helping them to live on and grow in new mediums.

“As a student, and as an artist, I honestly don’t think I’ve discovered my own voice yet, but I am discovering some truths along the way,” she said. “I feel like a lot of my work as a young artist in my 20s is taking these truths and in some cases other work, taking them out of context, and making them my own, and that’s what I was exploring as I was working through this project.”

Pierce said she’s not sure how long the installations will last, but she’s hoping they’ll stay around for at least a month or so, and hopefully longer. The moss she selected for the project, she said, is supposed to be able to survive well in cold temperatures.

The series was originally intended to include only the first three pieces Pierce has been working on, but the response to the project has been so encouraging, Pierce said she’s open to continuing to create more installations around town.

“I’ve been really surprised at how many people I’ve heard from about them already,” she said. “I’m definitely open to doing some more.”