From Poore to Rich 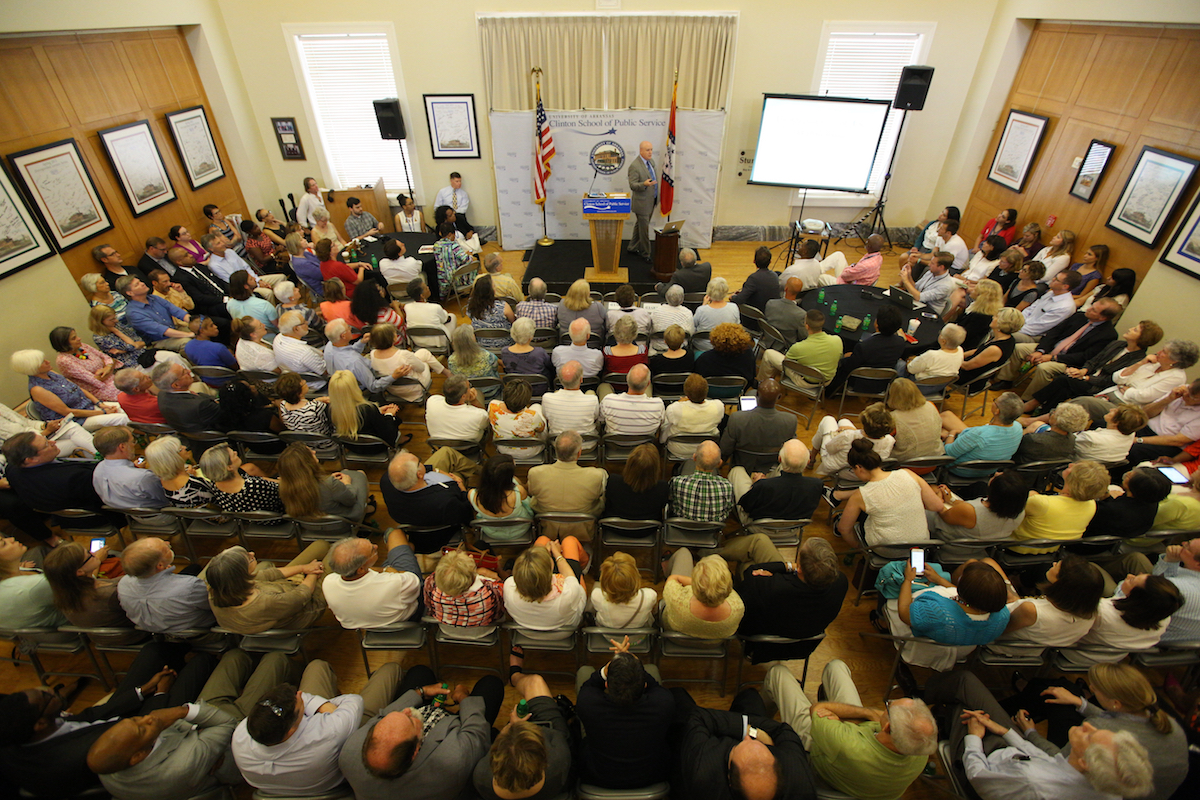 Historically, when it comes to K-12 education, Arkansas has been one of the worst performing states in the U.S. Overall, the performances of the 25,000 students within the Little Rock School District — the state’s largest district — haven’t much helped lift the state’s national standings.

For decades, it has had problems with graduation and subpar testing scores, to the point where six LRSD schools recently deemed “academically distressed” led to a state takeover and the ouster of the school board in January 2015. The district has also suffered from high turnover in its leadership ranks. Twenty four superintendents have presided over it in the last 30 years years.

With lessons from previous stops in Colorado and Bentonville, the newest LRSD superintendent on Tuesday laid out ideas for a district turnaround that would take longer to accomplish than the two year-contract to which he’s currently signed. In front of around 220 people at the Clinton School of Public Service, Poore emphasized data which indicate students who attend prekindergarten school have a significant advantage throughout the rest of their academic career over students without the same early schooling.

The LRSD currently provides more than 1,500 spots for prekindergartners but Poore suggested many more could benefit with expanded funding. The reasoning is that not only is the right thing to do, but it’s also by far the least expensive.

For instance, while investing in early education costs more up front, it can save big money down the road if ultimately keeping some students in school and out of jail. “You ever think about the difference between what it takes to pay for early childhood education for a young person? It’s a little over $7,000 [per year], give or take,” Poore said. “To educate a prisoner or to house a prisoner? Now you’re talking about $35 to $40,000.”

He added: “It’s an important policy matter… Because right now it’s not on the radar of our state government to say ‘This is something that we need to fund.’ We have approximately 15,000 students in this state right now that could benefit from early preschool opportunities. Fifteen thousand students that are not getting it, that are coming from backgrounds where they’re economically challenged.”

Poore also discussed other matters such as the future of magnet schools and his commitment to attracting and developing good teachers. Below are lightly edited excerpts from his speech and the Q & A session which followed.

On providing medical and dental care, hunger relief, transportation and other support for students and their families in need:

We’re in a place in this state that we need additional support for families. One of the things that I had my office in Denver was at an early childhood center and it was the Head Start Center for actually five school districts. This little child center for early childhood, one of the first things that I found out is they came and told me, “We’re going to come in and provide dental care.”I was a high school teacher. When I heard that we were going to provide dental care for early childhood kids, I was like, “You’ve got to be kidding me. What kind of liability do we have?” I’m almost ashamed to say those were the words that came out of my mouth…[With] nutrition, speaking to Ms. Kathy Webb, one of the things that you’re going to see this district do is partner with the Hunger Alliance. We talked about that. That’s something that has to happen to continue to support students that really need it. We need to have “wraparound” services.

On students collaborating with local businesses for project-based learning:

Now, those of you that own companies, I challenge you to step up right now and say, “I want to create a project for middle schools and I’m going to go give it to Mr. Robertson,” one of our middle school principals.

Let our kids go take on a project for your company. I’m talking a real problem and let them go dive into it. Think of what they will learn: science, social studies, literature, writing skills. It would all be combined into an output that makes them feel valued, but it’s also giving them a level of skills and real sustainable relationships. Kids at that age don’t need people wandering in and out. If you’re going to be a business, stay with us.

On the need for more mentorship through community projects, weekend support and summer camps:

I went to something called the SPARK. First time it’s ever been offered. This one is for gifted and talented students in the Little Rock school system. We’re at Stephens Elementary and it’s amazing what was going on with those kids. I saw everything from computer coding to ballet dancing to product development of software for shoes. They were designing new types of shoes. These were all fourth and fifth graders.

That type of interaction is in the summer so they don’t have that gap of just things dropping off in the summer. We need to engineer and create more of those type of opportunities.

On whether the loss of $37 million a year in special state desegregation aid starting in two years will affect funding for some of the district’s most innovative programs at its magnet schools:

I think those [schools] have been the exact word that they were developed for. They have been attractive, they have brought people in, and they’ve made people really believe in those schools. There are components of those magnets that need to be part of every school in terms of having kids think and be able to create and do. I also think there needs to be a place where there is some of those things that allow parents to have some choice.

The challenge behind it is transportation. How do we get through that? I personally think that that type of choice is a positive thing.

*Poore champions many expanded services that would require additional funding. Could getting what he wants affect future budgets for LRSD athletics? Read more here.