Top of the Rock Chorus 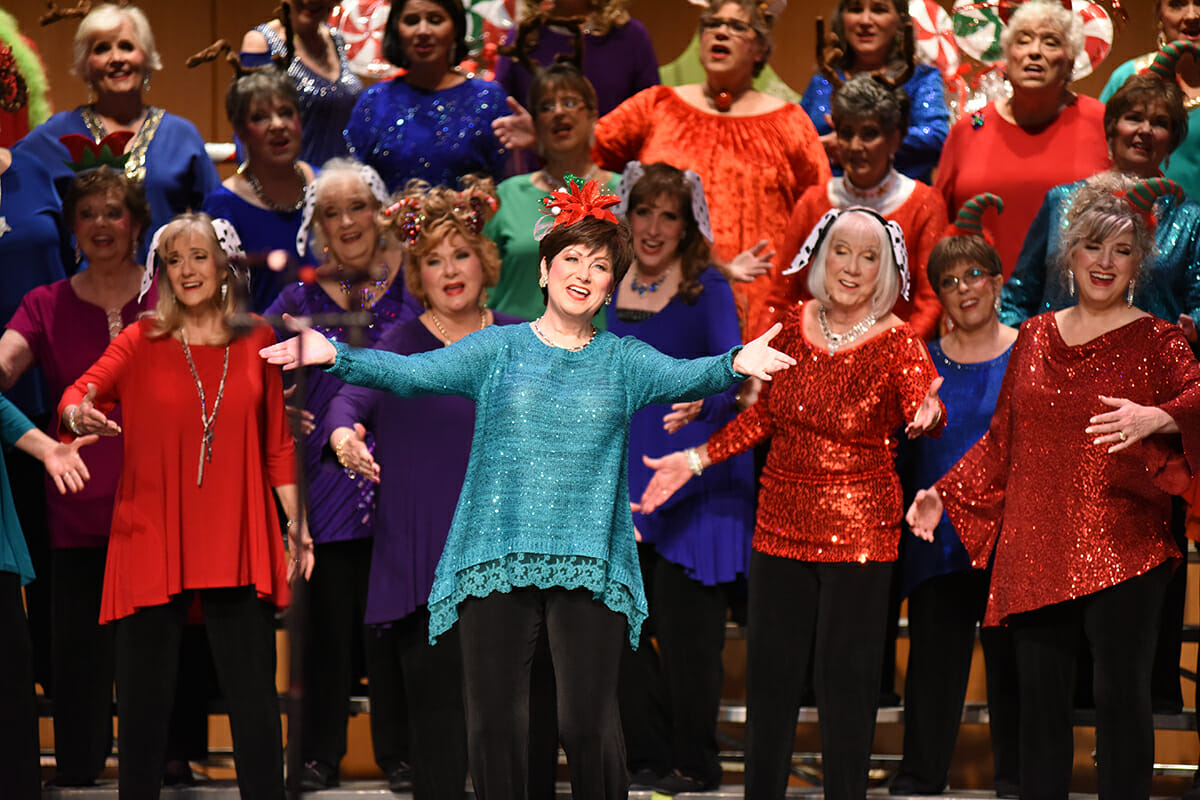 For the women of Top of the Rock Chorus, Little Rock’s premier a cappella chorus, March was a big month.

After all, March 23-24 was the 43rd annual Sweet Adelines International Region 25 Competition and Convention, which was held for the second year in Little Rock’s Robinson Center.

“The competition is a big deal for us,” said Kelley Causey, director of Top of the Rock. “We put a lot of focus on our contest package so we can present the very best Top of the Rock has to offer to our regional judges and audience. We also enjoy showing off Little Rock to all the competitors coming in from the five-state region.

Captain Hook and the Evil Queen, Chris Boggs and Kristi Hattenhauer, respectively, prepare to explain their crimes to Santa and a Jury of His Deers during “Dear Santa, I Can Explain.”

“We certainly enjoy winning medals, but ultimately, that isn’t what drives us. We want to know that we perform the best we can on any given day. We are really competing against ourselves, to see our scores improve year over year, and to have great fun doing it!”

This year, Top of the Rock certainly pulled out all the stops, raising their total score 26 points over last year to tie for Most Improved Chorus! The score earned them second place in both the mid-sized chorus division and in the overall competition.

“I am so proud of the tremendous progress we’ve made this year,” said Causey. “We finished second to Talk of Tulsa Show Chorus, outstanding performers who finished as the 12th best chorus in the world in last fall’s International contest in Las Vegas. “We had steep competition and really rose to the challenge.”

As a second-place finisher, Top of the Rock will wait to see if their score earns them a wild-card spot at the 2019 Sweet Adelines International Competition in New Orleans.

“We would love the chance to represent Arkansas on the big stage,” Causey said.

Top of the Rock members practice their choreography to “Something About Ya,” one of the two songs they will be performing at the Sweet Adelines International Region 25 Competition.

Top of the Rock-affiliated quartets, Vertigo and Roundelay, also found success finishing 5th and 13th out of 25 competing quartets. Treble in the Village, performing in the open division, walked away with the coveted Audience Choice Award.

“It was such a treat to sing in Robinson Music Hall again this year,” said Susan Padgett, chair of the Regional Convention and a Top of the Rock member. “We love having this opportunity to share great barbershop music with our community.”

As described by Sweet Adelines International, barbershop music is four-part a cappella harmony that is identifiable by beautiful ringing chords that produce overtones. Think of overtones as additional notes that aren’t actually being sung, but rather are produced by the combination of the other four parts.

Barbershop harmony originated in the United States but is now sung by choruses and quartets all over the world in organizations like Sweet Adelines International and the men’s Barbershop Harmony Society. These organizations support music education and the furtherance of this uniquely American art form.

Top of the Rock formed in 1961 and is composed of approximately 60 women, ages 14 to 81. The group rehearses every Tuesday night at Cumberland Presbyterian Church in Sherwood. Their repertoire includes everything from traditional barbershop songs to doo-wop, popular ballads, rock classics and Broadway show tunes.

The chorus has several performances planned for 2018, including a summer concert and a reprise of the wildly popular holiday farce, “Dear Santa, I Can Explain.” Their annual Tea, featuring fabulous fare, fashion and music, will be held May 12.

“One of the best things about Top of the Rock is that we have fun making music together,” said Causey, who sang with the chorus before becoming the director. “It’s like a great big musical family!”

A little about Yavonda Chase.

Arkansas Women Bloggers member Yavonda Chase is a former newspaper editor turned public relations writer. She married the love of her life nearly 13 years ago, and they have one beautiful daughter. She has been blogging about life, love and everything else for more than eight years, first on Little Rock Mamas and now on SimplyYavonda.com. She was born in Kentucky and still cheers for the Kentucky Wildcats, but has lived in Arkansas for 33 years and proudly calls Central Arkansas home.