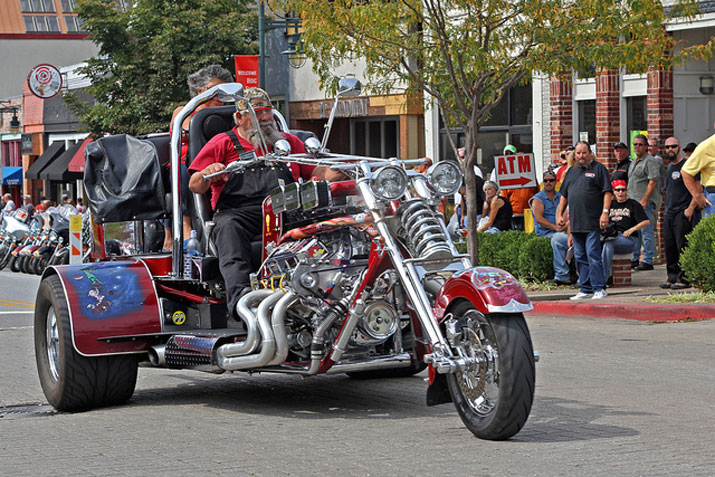 Bikes, Blues & BBQ is set to rumble into Fayetteville this week.

The rally will be taking place for its 20th year beginning on Wednesday, Sept. 25, and running through Saturday, Sept. 28.

The motorcycle rally includes live music and other performances at several stages around town, including the main stage in the West Avenue lot off Dickson Street, Baum Stadium, and on Tyson Plaza in front of the Walton Arts Center in Fayetteville.

Music headliners this year include the Dead Metal Society on Friday night, and Springfield, Missouri 90s tribute band The Mixtapes on Saturday night.

The rally is spreading out a bit in 2019. Bikes, Blues & BBQ has moved their official campground facilities this year from the Washington County Fairgrounds to the Benton County Fairgrounds, and the rally will be hosting music events there this year. The annual barbecue competition will be taking place in Rogers this year, set for 3 p.m. at the new Bikes on the Bricks event in Downtown Rogers on Saturday, Sept. 28.

There’s also a car show on Saturday at Arvest Ballpark in Springdale, and helicopter rides will also be taking off from that location Thursday-Saturday.


The mainstage at Bikes, Blues & BBQ

Other highlights of the rally include the motorcycle village at Baum Stadium, the annual Parade of Power bike parade from the Washington County Fairgrounds to Dickson Street at 3 p.m. on Saturday, and the Battle of the Bikes competition on Saturday morning on Dickson Street.

How about some wrestling? There’s a WCWA Wrestling event on Saturday at 6 p.m. at Baum Stadium. During the event, WCWA Wrestling will crown their first ever Ozark Regional Champion.

The Walton Arts Center will be hosting a “Full Throttle Party Patio” on their Tyson Plaza overlooking the street open in the evening on Wednesday and Thursday, and all day Friday & Saturday.

There are also always plenty of vendor booths set up with turkey legs, funnel cakes, meats on sticks, and other street carnival fare if you get hungry at the event.

There are poker runs, demo rides, train rides, a karaoke competition, a Miss BBB pageant, a bull riding exhibition, and a million other things scheduled during the four-day event.

A schedule of the music of the rally is listed below. For the full schedule of events, visit bikesbluesandbbq.org.

Bikes Blues and BBQ Campground at the Benton County Fairgrounds

NWA Riding Club (Next to the Washington County Fairgrounds