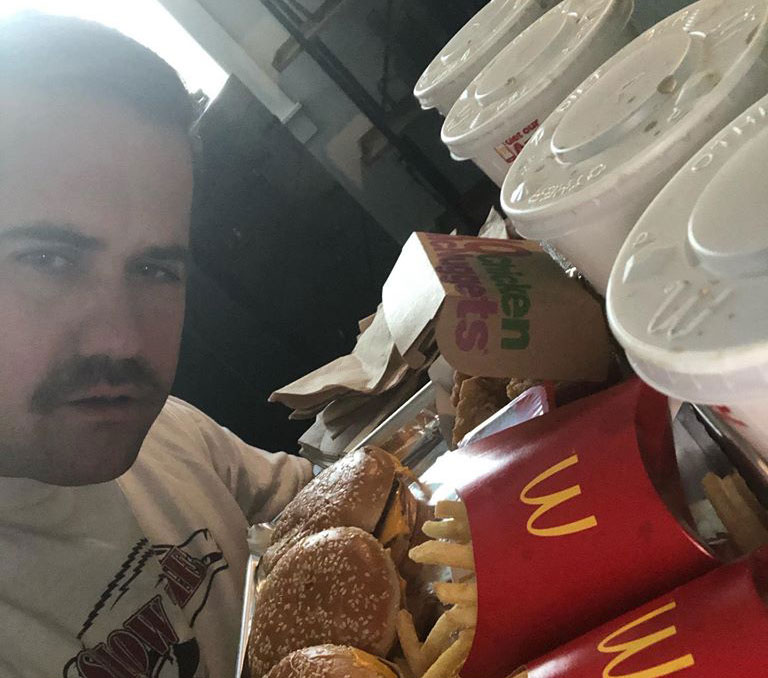 With everything happening in the world right now amidst the global pandemic we are currently living through, it would be easy to feel overwhelmed to the point of inaction.

What is the best way to help? Who needs it the most? Where do you even start?

Local resident Nick Brewer, however, did not hesitate. Instead, the former Hog deep-snapper that played under former head Coach Bobby Petrino dove headfirst into a pile of burgers and fries, and raised thousands to help local medical workers on the front lines, and others laid off as a result of the virus.

He boasted that he could probably handle it in an hour, and with the COVID-19 crisis currently gripping much of the world and effecting so many folks he knew locally, got the idea to raise some funds to help out in his attempt.

He asked his friends and followers to send him money to attempt the challenge, and vowed to donate the funds to either feed medical workers or as a random tip to local foodservice workers working through the COVID-19 outbreak.

He’d post his attempt to eat all the food on Instagram live for them to laugh at and enjoy.

The McDonald’s Tray Challenge proved to be more than Brewer (or probably anyone) could handle, but though he lost his lunch in the process, he was able to raise nearly $14,000 for his causes.

Brewer has already donated a chunk of those funds to Leverett Lounge’s Feed The Heard initiative to help provide food to restaurant employees laid off as a result of COVID-19, as well as to the Fayetteville Independent Restaurant Association’s fund to provide grants to hospitality workers. He has also surprised others with large tips for takeout.

The first eating challenge in progress

This weekend, he plans to do it all again. A second round food challenge, this time with fellow former Hogs Grant Cook and Frank Ragnow also participating, is in the works for 7 p.m. on Friday, April 17 where Brewer hopes to raise even more money to help out locally.

This time, Brewer and Cook will be eating locally, with the attempt to speed-eat a three course feast and brews from Sassy’s Red House. Ragnow, a former Hog offensive lineman who currently starts for the Detroit Lions, will provide the commentary.

We got in touch with him to learn more about his adventures in eating for philanthropy, and he was nice enough to answer some questions via email for us.

Tell me how the idea for round one came about?
Some buddies sent me a picture of the “McDonald’s Tray Challenge” that was circulating on social media and encouraged me to try and do it given my historical ability to consume large quantities of food in short periods of time. I looked at it and thought, realistically, that I could get it done with the correct preparation. I then had the idea to make it into a fundraiser and cater a meal for nurses and a big random tip for a delivery driver. I figured I’d raise maybe $500 amongst friends tuning in, but it just kept getting bigger and bigger. I changed my goal to raise $1 for every calorie I would consume (5,260) but we had surpassed that before I even began eating.

Is this your first time as a championship eater, or do you have previous experience with this?
Usually it’s $20 worth of McDonald’s/T-Bell at 2 AM or a solo large pizza after a fun weekend. I was once set to be a contestant in a Qdoba burrito eating competition and trained for weeks under the name “The BrewEato” to try and eat 3 burritos in under 5 minutes. Ended up not competing due to a scheduling conflict, but I could take down 2 full burritos in about 4 minutes.

For those who missed it, what exactly did you eat on the first challenge, and how much did you raise?
The initial challenge consisted of 3 Double Quarter Pounders, 1 Quarter Pounder, 20 Chicken McNuggets, 2 Medium Fries and 4 Medium Diet Cokes from McDonald’s. I had around one dozen fries left at the 69:00 mark, when the McDonald’s decided it wanted to exit my body the same way it entered. I ended up having 486 individuals donate a total of $13,883.69. We had people tuning in and donating from Europe, NYC, LA – all sitting down on their Friday night to watch a guy eat 5,260 calories worth of McDonald’s.

Tell us what all you did with the funds you raised.
I had to make a pretty intense Excel spreadsheet to keep track of everything. People had the choice of what their donation went toward (nurses or random tip) and included that when they sent in their donation.

Here’s how it breaks down.

We have close to $9,000 allocated to catering meals for the staff at Washington Regional. Once I receive a schedule from them for dates, times and number of folks needing fed, I will schedule meals directly with local restaurants to be delivered. My math estimates this will provide over 15 large group meals.

We donated $1,000 to Leverett Lounge, whose owner has been cooking large meals to provide free of charge to bartenders, waitstaff and others who have lost employment or are generally just in need of a meal. Every $10 provides a meal for someone who otherwise might not be able to afford it. Leverett Lounge has been doing great things and I hope to continue being able to support them going forward.
We also donated $500 to the Fayetteville Independent Restaurant Association fund, which is providing direct financial assistance to local restaurant/bar employees who are struggling to make ends meet right now. Individuals who have been laid off and in financial need can can visit their website to apply for assistance.

The remaining $3,500 is being distributed as “random tips” of $100 or greater when I have been ordering delivery or to-go from local restaurants. The individuals who have been fortunate enough to keep their jobs still rely on tips, and with the decrease in traffic they are struggling to maintain their standard of living as well. Plus, this is so enjoyable for me to be in a position to do personally and see how much it brightens someone’s day.