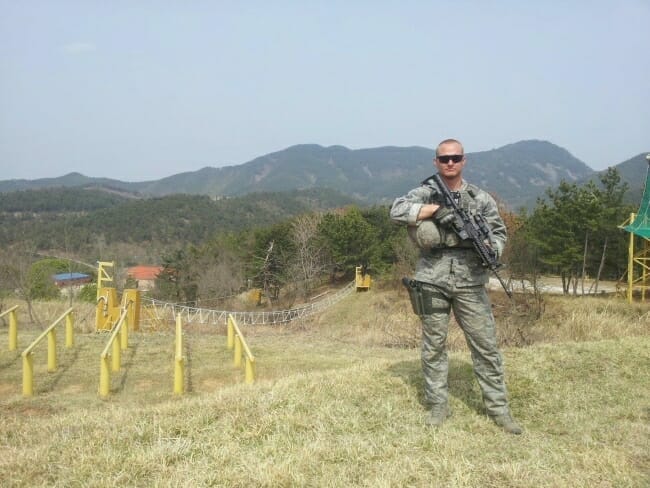 Brett Wood serves his local community in Clarksville by helping people find the loans they need to own their homes. However, he brings vast and diverse experience to the job with four years of military service, which saw Wood hold a number of assignments and win honors as an Air Force Security Forces Craftsman.

Wood was stationed in Korea during part of his military career while serving in the Global War On Terror (GWOT). While at Osan Air Base, near Pyeongtaek, South Korea, his duties included defense of Osan Air Base and serving as a member, sniper and trainer for the Base Quick Reaction Team. He also worked in the training section of security forces on base, where his responsibilities included developing plans, policies and procedures to train all security force members when they arrived at Osan Air Base.

Wood planned and conducted evaluations to find deficiencies in the base’s defenses and then strategized on how to correct those deficiencies, whether it meant more training and creating new plans and procedures. Part of his job also included overseeing $500,000 in assets and ensuring compliance with military inspections.

While in the Air Force, Wood also had several temporary duty assignments in Korea. He guarded aircraft while they were loaned to other bases for training and completed several training courses, such as Korean Special Forces School, Combatives, Quick Reaction Team Course and Quick Reaction Sniper Course, as well as Active Shooter Courses.

Wood also served part of his career in Tucson, Arizona at Davis-Monthan Air Force Base. While at Davis-Monthan, he worked in law enforcement as a patrolman, a traffic accident investigator, a base dispatcher, a flight trainer and a supervisor. He helped conduct and supervise law enforcement activity on the base and responded to major vehicle accidents. Wood has training in traffic accident investigation, which assisted him in his various roles. As a dispatcher, he coordinated with multiple agencies to run daily operations on the base, as well as respond to incidents. Part of his position required comprehensive reports detailing the daily operations to senior leadership on the base. Finally, Wood helped train troops in security-related job tasks, supervised and ensured compliance as well.

Wood also had a temporary assignment to represent the Air Force on the Air Force softball team. Every branch of the U.S. military selects athletes from its members to compete on a variety of sports teams. Those teams then compete against each other in tournaments held each year.

While in the Air Force, Wood earned the following honors:

Today, Brett Wood brings an array of experience to customers in the mortgage department at First Security and we are grateful for his service.