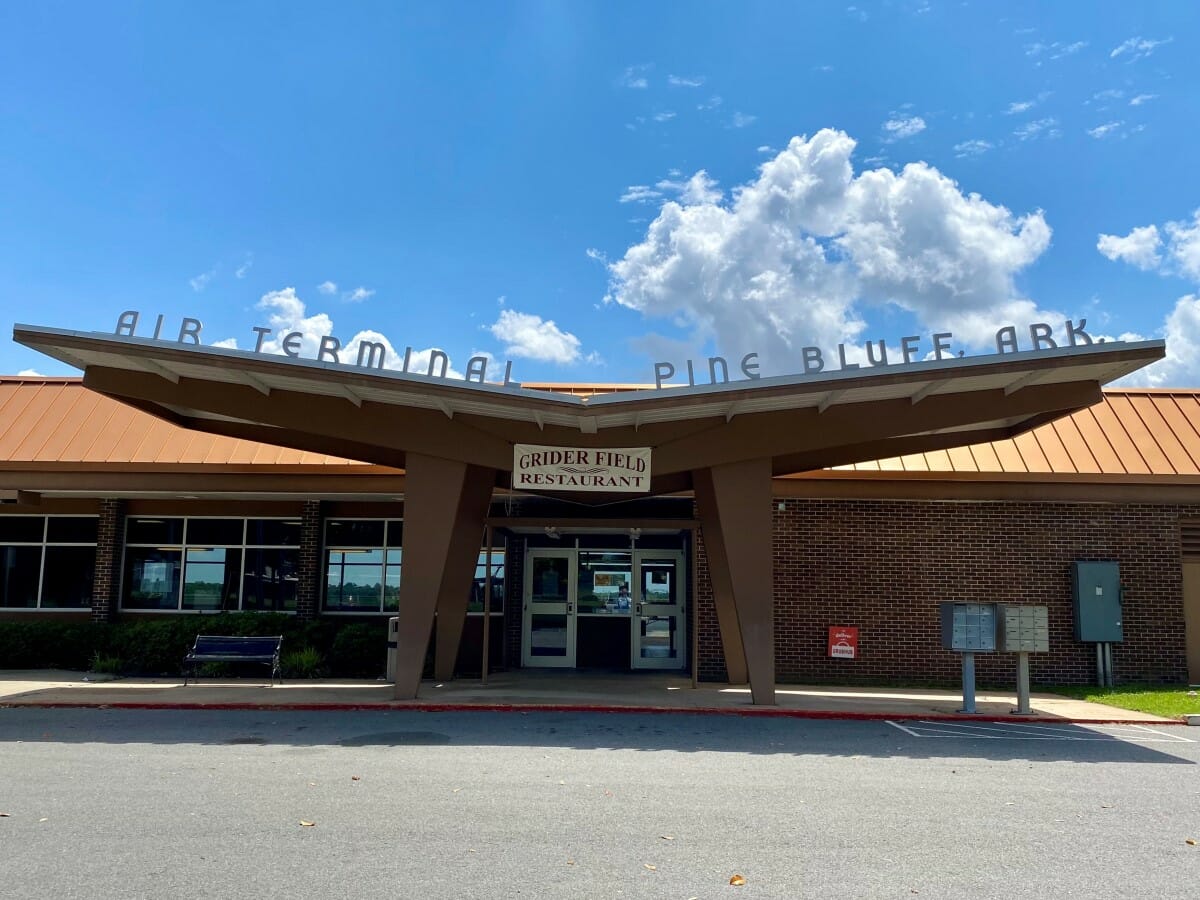 The thrill of finding an out-of-the-way gem like a soul food restaurant inside a tiny Pine Bluff airport never gets old for me. It’s the thrill of the hunt, finding places that are off the radar, so to speak. In this case, I am talking about Grider Field Restaurant. Ever been? If not, put it on your food to-do list. It has been on mine for the past few years. And I finally set aside time to make the one-hour drive each way from Little Rock.

I found a spot serving some of my favorite stick-your-ribs offerings like chicken and dumplings, fried chicken, and smothered pork chops. Grider Field Restaurant is currently takeout only (which I imagine will change soon). What the restaurant lacked in sit-down diners, it made up for with energy behind the counter in a team of women preparing food. Owner Berdia Monson is back there as well, peeling potatoes and prepping vegetables. A quick turn of the head allows you to gaze through the expansive windows onto the runway just a stone’s throw away.

Grider Field was unlike any restaurant I’ve been to before.

Oh, and about the food. The chicken and dumplings are about as classic as you’ll get, with scratch-made, rolled dumplings swimming in a thick broth along with celery, carrots, dried herbs, and a plethora of chicken. You’d be hard-pressed to find a better version, at least in a restaurant setting. The fried chicken and smothered pork chop (in brown gravy), both dredged in a flour and seasoning mixture, then fried to a golden brown, were just as impressive. Brown gravy was also used to top my scoop of creamy mashed potatoes. The savory flavor paired wonderfully with my other sides of sweet yams and steamed cabbage.

I was already in carb heaven, and that’s before even tasting the subtly sweet cornbread muffin. My goodness. Order a couple for the road. A quick taste of the cornmeal-coated strips of fried catfish was also met with favorable results, although I would have preferred a slightly crispier bite.

Grider Field Restaurant’s limited hours (Monday-Friday from 11 a.m.-2 p.m.) mean that those of us who don’t live in the area need to set aside time for a visit. But believe me, the food, setting, and kind-heartedness of the employees make a special trip well worth it. And hey, if you have a small aircraft, just pop on over. There’s nothing quite like chasing a plane landing with a hunk of meatloaf. Just make sure it’s on a Wednesday.

That’s the only day the ladies make meatloaf.

Grider does different specials each day, so go check out their menu, including other proteins like baked chicken, fried catfish steaks, turkey neck bones, chicken spaghetti, and liver and onions.

Fayetteville is no longer just a college town with a limited food scene...