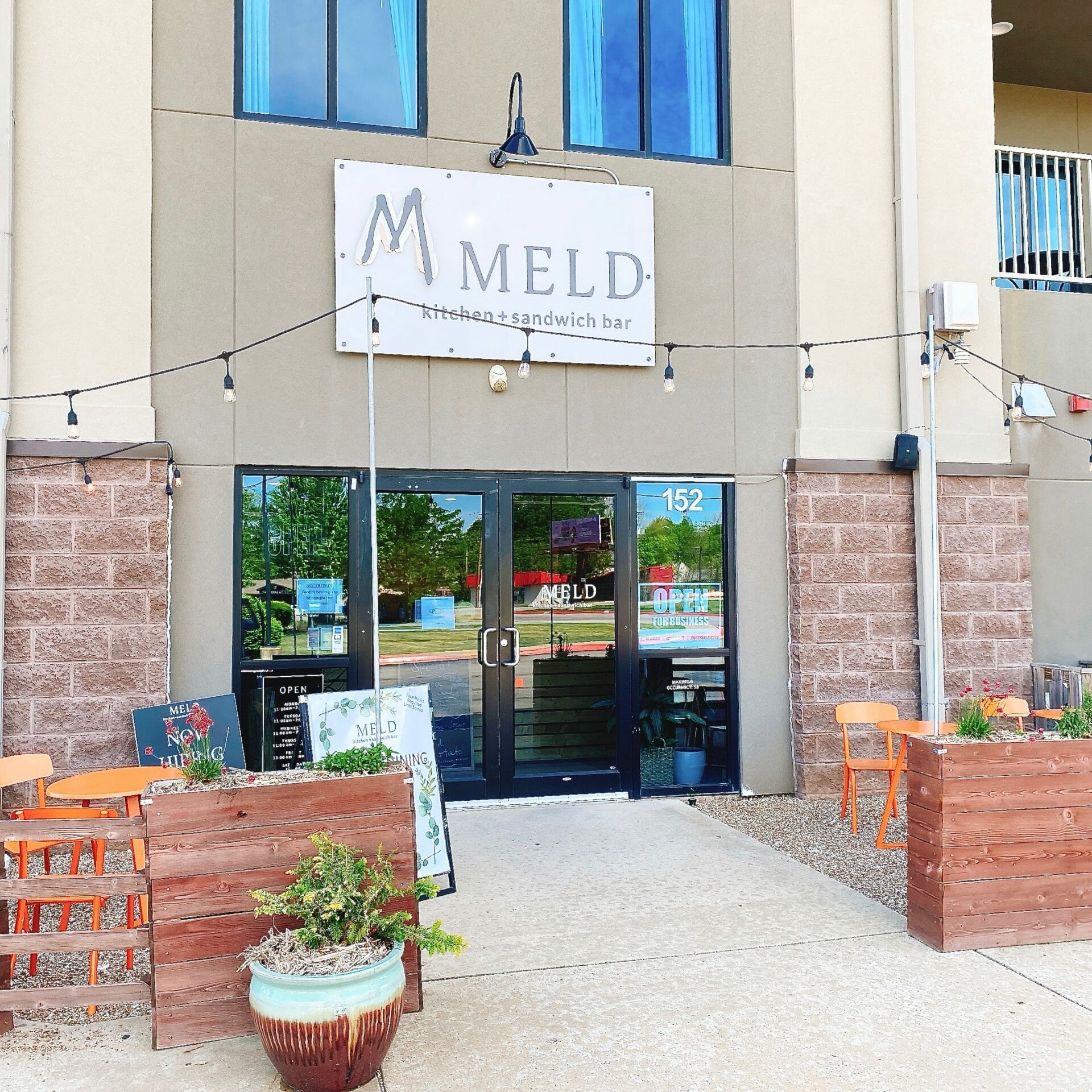 You know that feeling when everything is neat and tidy and you feel like you can just breathe better because there are fewer distractions? That’s the feeling you get when you walk through the doors of MELD Kitchen + Sandwich Bar. It’s modern-cozy and you instantly feel right at home.

The timing was right.

“So, what are you doing tonight?” Keri Rostek had just answered the phone and her friend’s question had a ring of excitement. The friend knew that Keri had moved to Arkansas recently from Texas and used to own a restaurant. She would tease her by saying, “I bet you never want to do that again!” Actually, Keri DID want to do that again, only it was something she thought she would pick up again in the future.

That night her friend asked, “Want to see a restaurant space?”

This time the timing was right. Keri was about to go back to her hospitality roots.

Food is craving, love and seriousness.

In 2004, Keri and her husband were living Colorado and were feeling restless. After visiting her sister in Texarkana, they fell in the love with the cute little town and knew what they had to do. The husband and wife team went back to Colorado, wrote a business plan, quit their jobs, secured investors, purchased land and built a restaurant.

For 10 years they ran the restaurant and immersed themselves in the community, loving the people, the place and their employees.

Then, in 2011, their boys started their academic careers in Fayetteville and the couple started visiting Northwest Arkansas. Immediately, they fell in love with the area and wanted to be closer to their kids, so they decided to sell their restaurant and move north.

Yet, the community they built while running the restaurant was tugging at their hearts. Keri knew she wanted to get back into it.

“Food is interesting. What it does to people. I remember a customer whose mother opened a hardware store across the street from our restaurant in Texarkana. He would tell me how tough those customers were.

It’s a different kind of madness when it comes to food. If you mess up with food, it’s a whole different thing. Why? It’s because food is craving, love and seriousness. You find a magical dish at each place you go. And you want it to be the same. If it’s not the same, people will often feel sad.”

Something simple that lasts.

After that call from her friend, Keri knew the timing was right to open up a modern, cozy, fast-casual restaurant in Bentonville. She opened the doors to MELD Kitchen + Sandwich Bar in February 2018.

It was hard to choose a name this time since so much had changed in the 14 years since opening the doors to their first restaurant. After working through names and phrases that would be appropriate AND have an available domain name, she landed on the word “meld.”

“I just wanted a simple term that would last and not be a phase. Our menu is very blended and our sandwiches have lots of ingredients that we put together. I kept trying to find another word for “blend” that would be different. My husband went to the Culinary Institute Academy in New York, and the word “meld” was subtly used when creating dishes. So, that was it. I decided that it was going to be meld because it’s a simple term.”

Keri loved the word “meld” but was almost talked out of it. Then a co-worker at her corporate job gave her a People magazine that highlighted where to eat in every state. As she read the recommendation to dine at The Hive (a Bentonville favorite), Executive Chef Matt McClure was quoted, “Chef melds his ingredients together.”

Keri decided right then and there. “That’s it. It’s going to be MELD.”

Keri has a gift for people. You just seem to have always known her… and she loves it that way. She doesn’t seem to forget a name or face, and often she can tell if someone is visiting from out of town.

“We love people coming to the restaurant, creating their food and making them happy. It’s like a home. It’s just so much fun. We have so many people coming from everywhere. It’s so diverse and welcoming. That is what we love about the restaurant business and meeting people. I recently had a customer who was really happy and had an aura about her. I was like, I just know you – I know your face! It didn’t take long for us to figure out our connection.”

Let’s chat about those folded sandwiches.

One of the menu categories at MELD is unique craft sandwiches made with baked-to-order bread.

Let that sink in for a moment.

The bread is ready in dough form (white or wheat), proofing until you order it. Once you put in your order, they take the dough ball, put the ingredients on one side, fold it and run it through a super powerful oven at 550 degrees. So as it runs through the oven the bread is baked. Then, they open it, put in all the cold items, fold it back, cut it and it’s ready to serve. Amazing!

Keri tells me that people will come in and as they ponder the menu will say, “Nah, it’s just a sandwich.” But she tells them, “If you’ve never been here, you’ve never had a folded sandwich before. You’ve got to try it.”

The Greek Folded Sandwich is quite popular and I’m over-the-moon for the Big Beef Folded Sandwich, stuffed with sliced roast beef, caramelized onions, provolone, avocado, sprouts, horseradish cream, lettuce and tomato. These are generous servings, so bring an appetite.

(Fun fact, the Greek and Big Beef are even better the second day.)

If sandwiches aren’t your thing, don’t worry, you have plenty to choose from: soups, tacos, burgers, pizza and light eats.

Cookies are made fresh every morning and a new menu is coming out with more baked goods and lots of little sweet stuff. Complete with a new pastry case on its way.

MELD prides itself on customer service. Keri believes that customer service helps you stand out. But she firmly believes it’s not about her – it’s the team. One day she was working the counter and a customer asked her, “Is Justine there?” Those are the touches of customer service that fills her with pride. That MELD is more than a restaurant, it’s more like a family.

“That’s the thing that is just so awesome, that you make these relationships and that’s just what makes it.”

If you haven’t made it to MELD yet, pop in, get comfortable, and start working through the menu. But most of all make this your new welcoming place.

If a coffee shop can feel as fresh and relevant today as it did...

If you’re looking for fancy comfort food with a twist, look no further...