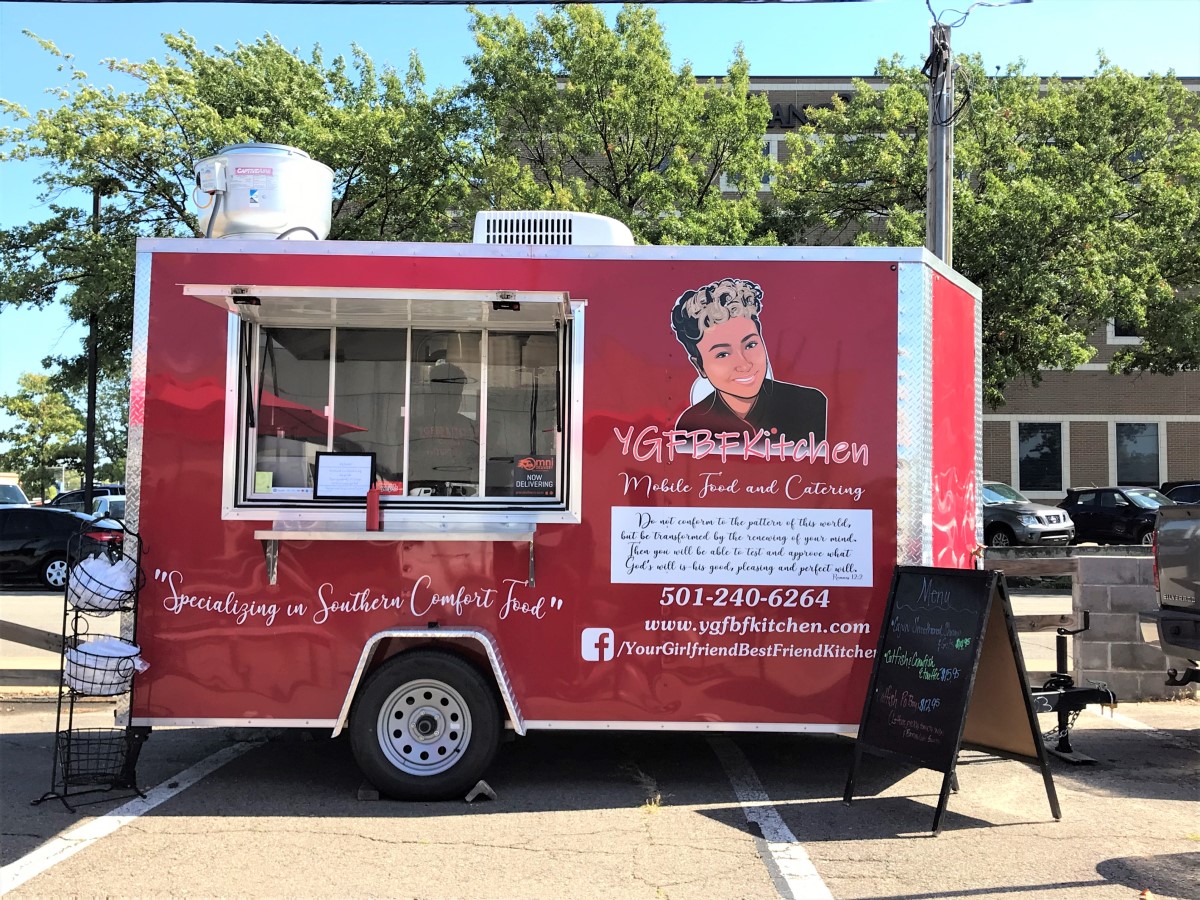 There has been a resurgence of quality food trucks in Central Arkansas over the past year, which has led me to keep a close eye on some of the new mobile eateries popping up around the area. One of these trucks, YGFBFKitchen, got rolling this past June and is primarily based at 1013 Main Street in Conway. YGFBFKitchen is led by chef/owner MaryAnn Strange and specializes in “gourmet food on the go.” There’s a definite lean towards Southern and Cajun cuisines, as evident by dishes like shrimp and grits, catfish po’boys, and shrimp boils, but Strange’s menu also includes items like hamburgers, chili cheese fries, fresh Cobb salad, and fajita nachos.

“The inspiration for the food truck actually came after I was laid off from my job of eight years. I knew I loved to cook, and I got so much enjoyment when friends and family would eat my food. When God presented the opportunity to step out on my own, it seemed only right to turn my hobby into my career. I started cooking back in college from things I saw on Food Network, cooking books from the grocery store, and recipes from my mom and dad. It came natural for me to cook. Flavors combinations and item pairing was a second language to me. My mom and dad were both great cooks, so I guess you can say I was born to cook,” says Strange.

And I’m guessing you’re wondering about the name.

“YGFBF stands for Your Girlfriend Best Friend. The name concept came from a situation between me and my best friend. She came over one day and asked if I would cook her some dishes because she was trying to impress a new guy she was dating. I thought it was funny at first, but she was very serious. I made the dish and gave it to her. I called a couple days later to ask how about the dinner. She went on and on about how the guy loved the food. She told him she cooked everything from her mom’s recipes. So, as I was thinking of a name, that seemed to fit, Your Girlfriend Best Friend. The best friend that helps out your wife or girlfriend when she doesn’t feel like cooking.”

And while helping friends may have been the inspiration, the real winners in all of this is the general public. I found this out firsthand a few weeks back when I drove up to Conway and had some of Strange’s shrimp and grits, a $15 mountain of food that was just as delicious as it was enormous and affordable.

“Well, the Cajun Smothered Shrimp and Grits came from a suggestion from a Facebook friend. I was polling the customer base on dishes they would like to see on the menu and shrimp and grits came up. Being as though I never made shrimp and grits, I started looking up recipes on the internet and Pinterest. I took ingredients from each recipe I saw and came up with the Cajun Smothered Shrimp and Grits. The dish originally didn’t include smoked sausage, but I thought it needed another smoky element. It’s a basic Cajun gravy that includes peppers and onions poured on top of stone-ground, creamy, cheesy grits. It is then topped with our blackened shrimp and smoked sausages.”

The shrimp and grits were so good that I’m already thinking about a return visit to try out the Chicken and Shrimp Rasta Pasta, Chicken and Red Velvet Waffles, and Catfish & Crawfish Etouffee. It’s best to keep an eye on YGFBFKitchen’s social media for location updates. Along with her spot in Conway, Strange can be found in Little Rock and Maumelle a couple times a month, and she also caters events and does private functions like weddings, birthday parties, retirement parties, girls night in, and baby showers.

Why did it take me so long to visit Dave’s Place, the unassuming,...

We adore fried catfish in these parts. And whether it is a small town,...