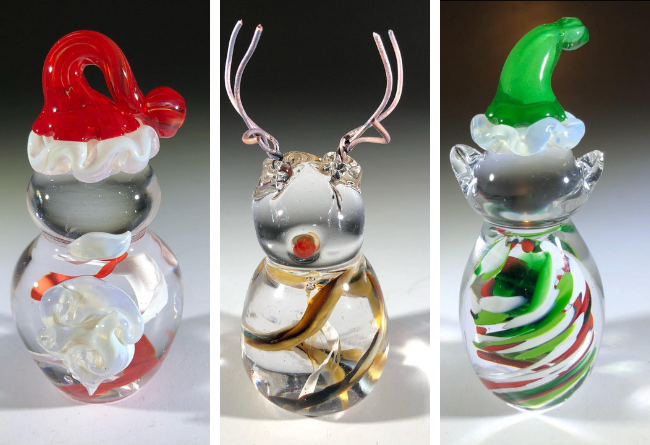 Santa and ornaments are some of the most iconic Christmas traditions. Two Arkansas artists have spent 30 years honing their distinctive styles of Christmas artwork: James Hayes of James Hayes Art Glass Co. and Deb Johnson of Red Suit Studios.

Well-known throughout Arkansas and the Southeast, James Hayes of Pine Bluff has been creating art glass since 1988. The first items he made after discovering glassblowing were paperweights, but when Christmas came around, he started to make Christmas ornaments, which soon became an annual item.

In fact, he was invited to design one for the Clinton White House in 1997 with the theme “Santa’s Workshop.” He also received an invitation to see it displayed on the White House Christmas tree in person that year.

Christmas glass remains a big part of his body of work, and his most popular item for Christmas is the ornament.

“Many buy a new one every year because I date those with the year, and it becomes a collectible to people as they look for just the right one to purchase each year,” Hayes said. “Some get them as gifts for their children so that when they grow up, they will have a whole collection of each year they have been alive. This makes this item my favorite, as it becomes something so personal for most of my customers.”

Other figurines in the Christmas glass collection include trees, Santa, snowman, reindeer, Santa rubber duck and Christmas angels. This year, the studio introduced an elf, which Hayes describes as “just as fun and whimsical as the rest of the Christmas figurines.”

Although Searcy-based Red Suit Studios did not begin until 2010, the founding artist has a 30-year history in Christmas artwork. In 1989, Deb Johnson was invited to join a small group of women to learn how to paint ceramic Santas. While spending time together mastering the skills to paint, the women were also mentored on how to navigate through life while being wives and mothers to small children. However, those family and work responsibilities caused Johnson to take a 20-year break from painting. But in 2010, she dusted off her supplies and began painting Santas once again.

Johnson said the image of Santa appeals to her as an artist because she has such fond memories of the weekly invitation to paint with a woman who was also a wonderful mentor. “I also find it very intriguing to paint such a variety of Santa images,” she said. “They have different facial features, come in different sizes and are involved in so many different activities. It is very satisfying to start with a blank piece and gradually see them come to life.”

She said the pencil Santa is her most popular item, particularly the tall ones.

Since she retired from Harding University in 2019, she has had time to paint year-round, though she does take a long break after Christmas. She has customers from all over the country and recently completed her first international sale.

“Christmas is such a special time to most people,” Johnson said. “It is a time to not only celebrate the birth of Christ, but to celebrate love with family and friends. We love to celebrate with food, lights, decor and gifts. Who doesn’t love Christmas? It brings me great joy to know that one of my hand-painted Santas will have a special place in so many homes.”

Hayes expressed a similar sentiment regarding Christmas artwork. “It appeals to me because many people buy my work as presents,” he said. “It brings me joy to provide them with exactly what they wanted and then to know that when that person opens the item, they will have great joy. I love providing people with the things that bring them joy. I know that on Christmas there will be so many smiling faces as they open gifts. I helped make those smiles. It is truly a great feeling.”

Hayes’ work is available in his Pine Bluff studio and in retail locations across the country.