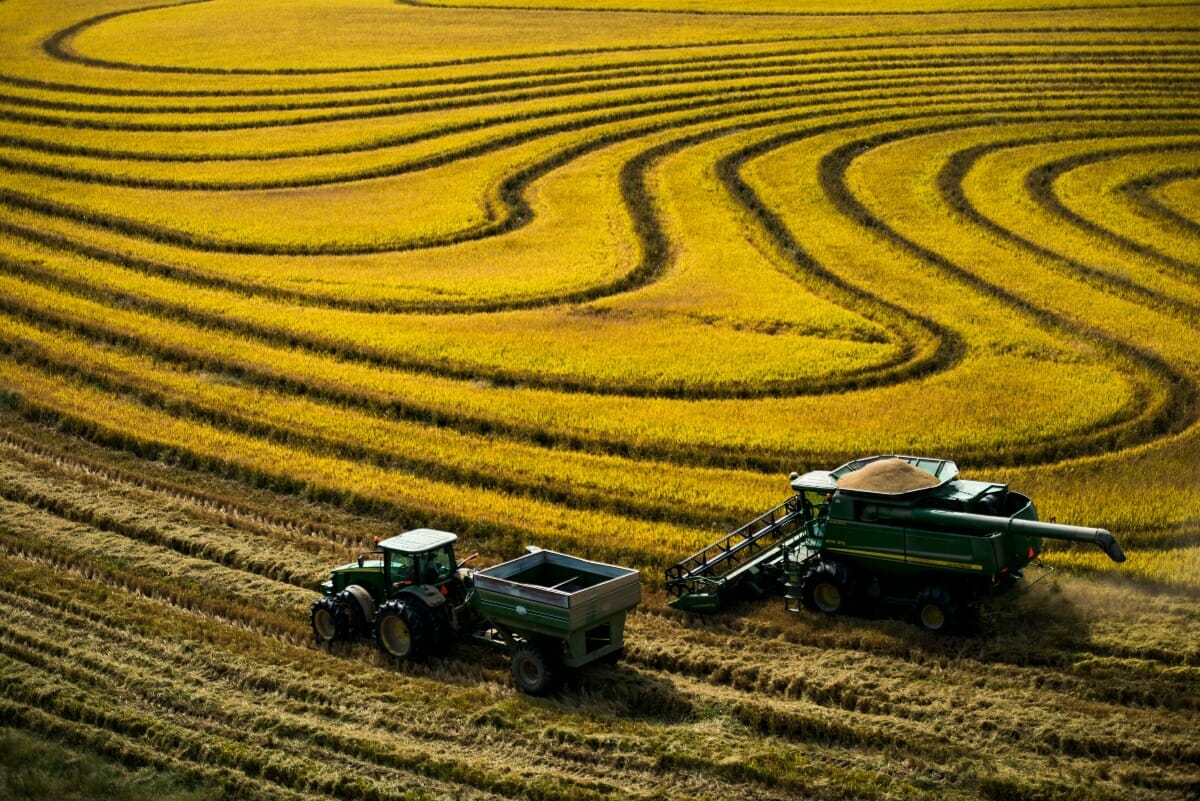 Arkansas is an agricultural state, and agriculture is our leading industry, adding $16 billion a year to the state’s economy. As you cross the state, whether you’re driving from Little Rock to Memphis, Conway to Texarkana, or Fayetteville to Jonesboro, you’ll see a variety of crops outside your car window, no matter what season it is. Read on to learn which crops grow across Arkansas and which season you’re likely to spot them as you travel the Natural State.

Rice is by far Arkansas’s most important crop. The state is the largest producer of rice in the United States, growing 47.5% of the country’s total production each year. In 2021, Arkansas rice farmers set a new state record with an average yield of 7,630 pounds of rice produced per acre. Rice is grown primarily in eastern Arkansas, but pockets of rice growers are found in the Arkansas, Ouachita and Red River Valleys. Rice grows well in Arkansas’s warm, subtropical climate. It also grows in nearly any soil except sand. Farmers plant rice in the spring, and it requires a semi-aquatic environment. Rice fields are often planted along the contours of the land, with raised levees that follow the shape of the land to allow farmers to flood the fields and keep the crops well-watered. Rice grows three to four feet high as green stalks that turn to gold in summer as the grains mature. They’re harvested from late summer into the fall. Find out more about Arkansas rice from the Arkansas Rice Federation and Riceland Foods.

Soybeans rank in the top three of Arkansas’s crops and are an important source of exports. Farmers plant about three million acres of soybeans each year and produce 50 bushels per acre on average. Soybeans are used for protein in animal supplements, as a source of biodiesel, and are gaining popularity as a food source for people as well. Arkansas is the tenth-largest soybean-producing state and exports 50% of its crop. Soybeans are planted in the spring and grow into green leafy plants three to five feet tall. The soybeans grow in pods and are harvested in late September and into October and November. As the plants reach harvest, they begin to turn yellow. Soybeans are grown across eastern Arkansas as well as the river valleys in the central and southwestern parts of the state. Find out more about Arkansas soybeans and growers from the Arkansas Soybean Promotion Board.

Cotton rounds out Arkansas’s top three crops. The state is consistently third in cotton production in the country and fourth in acres planted and yield. Cotton is relatively easy to identify. Cotton plants are bushy and grow around four feet tall. They produce a white to creamy yellow flower. Once the flowers die, the plants form round green pods, called bolls. When these bolls dry out at the end of the season, they split open and reveal the white fibers that are picked during harvest. It’s planted in the spring and harvested in the fall. Cotton was once grown in every county in Arkansas. The state is still the 3rd largest producer of cotton in the U.S. It is grown mainly along the Delta region now. It is also grown in lesser amounts in the Southwest corner of the state. In 2022, farmers will plant 520,000 acres of cotton in Arkansas.

After cotton, corn is likely the most identifiable crop planted in Arkansas. Arkansas plants about 760,000 acres of corn each year. The state’s corn production mainly supports animal feed, with 70% of the corn yield going to poultry feed mills. The corn is also exported, mainly via the Arkansas or Mississippi Rivers. Corn is planted in early spring and grows in long, straight stalks through the summer. The stalks can range from five to twelve feet, depending on the variety of corn. Most plants produce one to two ears of corn. Tassels appear at the top of the corn as the ears ripen. When the tassels change from yellow to brown they’re ready for harvest. Corn in Arkansas is harvested in August and September. Find out more about corn from the Arkansas Farm Bureau.

Sorghum is a lesser-known grain in the U.S. that is still a significant crop for Arkansas farmers. In 2020, farmers planted 12,000 acres of sorghum. In 2021, that number soared to 90,000 acres. Sorghum is an ancient grain that is gluten-free and in the U.S. it’s primarily used in animal feed. Still, its popularity is growing. It is heat tolerant and drought-resistant, and it uses less water and resources than corn. The plant can grow from two to eight feet and looks similar to corn but shorter. The stalks produce clusters of small red, yellow or orange flowers. After flowering, the plants form seed heads, which can be yellow, red, white or bronze colored. Sorghum is sown in May and harvested in September. In Arkansas, it’s grown along the Delta region and works well as a rotational crop. Learn more about sorghum and find a great recipe here.

Wheat grown in Arkansas is mainly winter wheat. Soft red winter wheat is the variety typically grown across the state. It makes excellent all-purpose flours for baking cakes and cookies. It is planted in October and November so the grain can take root before cold weather arrives. The plants go dormant through the coldest weather before entering another growth phase in late winter and early spring. The plants start as one main shoot and then add tillers or other smaller shoots. Eventually, the plants add heads of kernels which grow, ripen, and harden. The shoots and kernels turn from green to golden brown before harvest, which happens beginning in June.

Though farmers in the state planted 180,000 acres of wheat in 2020, that number is down from the 680,000 acres planted in 2013. In the past, the state has averaged planting 600,000 acres of winter wheat each year. Winter wheat is grown near the river valleys in Arkansas, including the Mississippi, Arkansas and Red Rivers.

With over 14 million acres of farmland and 41% of Arkansas land categorized as farms, Arkansas’s crops are a vital part of the state’s economy. The next time you’re crossing the state, have a look at the land outside the window. You’re likely to see some of the most important crops thriving in the Arkansas soil and sun.