ASSEMBLAGE: Putting Together a New Life in Witter 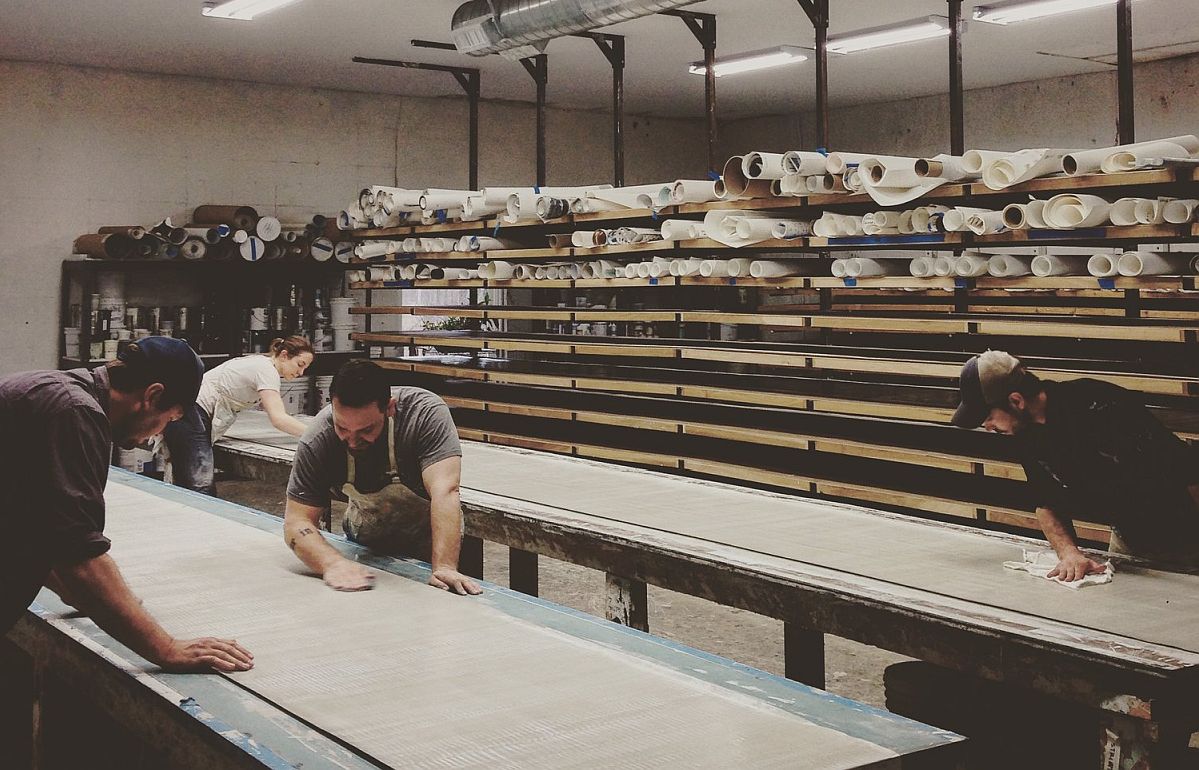 Some artists are born and raised in Arkansas and leave the state to become known in their fields. They tell stories about a youth spent in The Natural State and experiences that inspired them to become the creative people they are. Some artists discover Arkansas after they’ve made a name for themselves and find a slower pace and the surrounding beauty conducive to an artistic life. Christian and Heidi Batteau are married artists who embody both scenarios as they run their bespoke wallpaper business based in Witter.

Artists and business owners, Christian and Heidi Batteau, in their workspace.

When they founded ASSEMBLAGE, the couple combined Heidi’s eight years of experience in the textile industry, Christian’s background in surface art for architecture, and their own fine art educations (they met at the Kansas City Art Institute). Thanks to a large project with Tiffany’s early on that put a spotlight on their work, the company they run out of a repurposed seed mill not far from where Heidi was born has been successful on a level that not many people would have predicted.

The Batteau’s wallpaper journey began in Brooklyn, as so many great stories do, where the artists were doing their art thing and finding some success working creative jobs and also exhibiting their own art. Probably more than a few of you are thinking right now, “You can make a career out of designing wallpaper?” It turns out you can. In fact, while in New York, Christian and his sister ran a company doing just that, and worked with high-profile clients that included Chanel, Dior, and Louis Vuitton. At the same time, Heidi was exploring wallcoverings as a way to express artistic concepts while working as a textile designer. The draw to mark-making and wallcovering design bubbled up naturally for them both.

When, in 2011, Christian and Heidi decided the time was right to relocate to a place that would allow them to put down some roots, their hometowns were their natural first thoughts. They wanted to build a business, but they also wanted to create a sustainable lifestyle and raise a garden and some kids. Witter was the clear winner over Los Angeles.

With their move to rural Arkansas, Heidi and Christian became part of a growing movement of artists who are retreating from the chaos of city life and proving that proximity to high-speed transit is not required to make success in the art world possible. ASSEMBLAGE is now known around the world for its specialty papers and can be seen enhancing interiors in more than twenty countries.

As is common for artists in the Ozarks, the local landscape influences the couple as they work. While they continue to create custom designs based on clients’ specific tastes, they say the neutral colors and natural lines of local landscape seep into their design portfolio. Heidi adds that the change in the pace of life has also made an impact, infusing their work with “an intensely quiet and textured aesthetic.”

The wallpaper you grew up with was probably simple rolls of paper printed with commercial paint or ink applications, but that is not what you’ll find at ASSEMBLAGE. Their handmade process utilizes natural materials as well as the actual bodies of their staff (human “printers”) to meticulously apply the paints, plasters and other materials to the base of the paper. On a walk through the workspace, visitors might find a pile of gold leaf, marble dust, or flakes of silver and bronze scattered on the floor and tables – elements from nature that will eventually be incorporated into interior spaces located far from any kind of natural setting, but still evoke a feeling of being connected to the world beyond the city limits.

Many hands are required to create long swaths of delicate textures and designs.

Heidi and Christian say they see themselves as “manufacturers of ancient crafts with modern designs.” By hiring their staff locally, they are introducing a largely-unknown level of artisanal design to their community and joining the push toward, as their website states, “the renaissance of American craft manufacturing.” Their commitment to sustainability includes relying on rainwater as their only source of water for the building and paying their staff a living wage. Scroll through their Instagram account to see the ASSEMBLAGE team in action.

Because ASSEMBLAGE operates in the rarified air of high-end interior design, they have not been brought in on many projects within their own state, but there is currently a public installation at Brick Avenue Lofts in Bentonville. The collaboration with Specialized Real Estate and Modus Studio features ASSEMBLAGE’s classic Chevron pattern in the building lobby.

Seven years, two kids, and a thriving business later, Heidi and Christian have not only put down those roots they were seeking, but they have also planted a new-to-Arkansas industry. Naturally.

0
0
Birds in the Winter Garden in Arkansas
Laurie Marshall

With all the mild temperatures in Arkansas, it might be difficult to...

I was fortunate to grow up with grandparents who lived on a working farm...