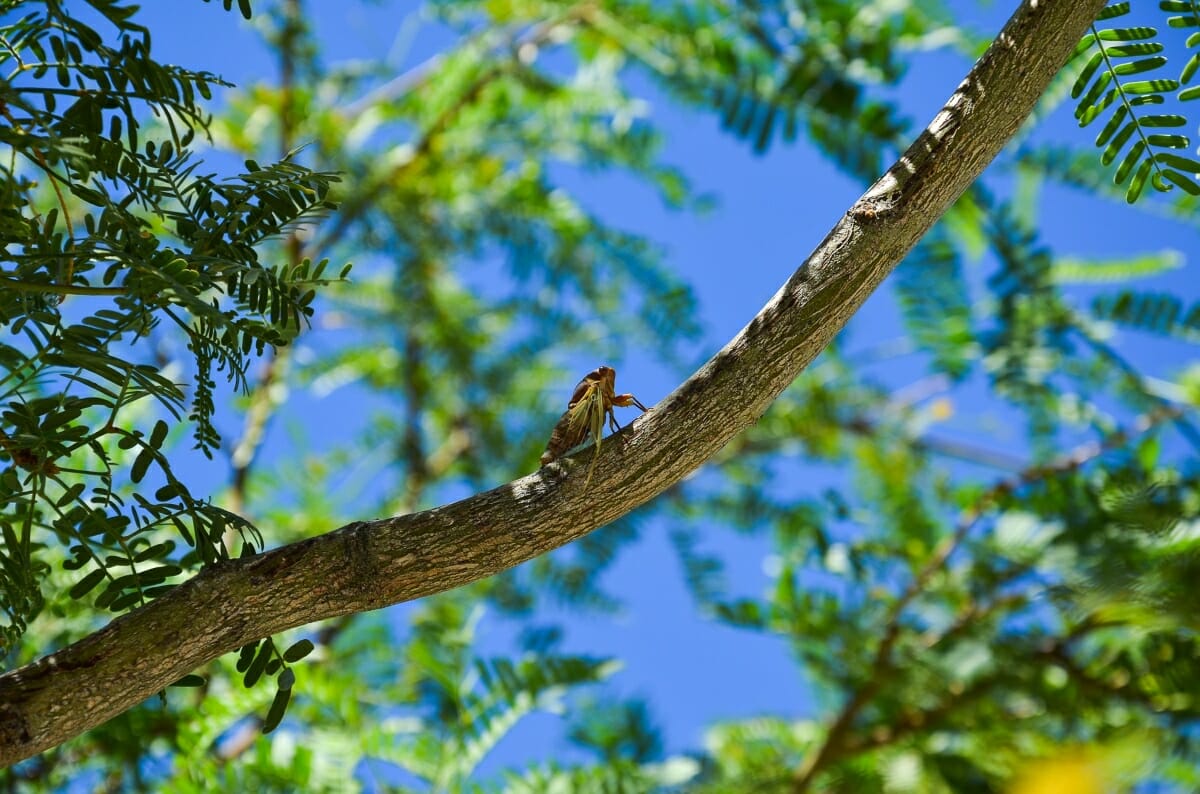 If there is one sound I listen for as summer deepens, it’s the chainsaw song of cicadas as they sing from treetop perches. Their loud buzzing is ingrained in my summer memories, and perhaps yours as well. Often mistaken for locusts, cicadas are a species of their own, or more accurately, many species. Cicadas form a superfamily called Cicadoidea. There are 3,000 known species, but likely many more unknown. They exist all over the world, including Arkansas.

The word cicada is pronounced si-kah-duh or si-kay-duh. While both are correct, you’re more likely to hear the second in Arkansas. Arkansas is home to at least 24 different species. Many of these are annual cicadas. They appear every year in late spring and early summer and have such entertaining names as Fall Southeastern Dusk-singing Cicada, Dog-day Cicada, Scissor-Grinder and Swamp Cicada. These names are not the scientific designations for these species, but the more descriptive versions of each type of cicada and when or where they can be found.

A cicada molts and leaves its exoskeleton behind.

Cicadas are born in trees or near them. A single female can lay up to 400 eggs and prefers twigs and branches as a laying site. After six to ten weeks, tiny white nymphs hatch from the eggs and burrow into the ground, where they’ll spend most of their life cycle. Beneath the ground, cicadas drink from tree roots and grow, usually molting several times. After a period of time, which can range from one to 17 years underground, the cicada tunnels to the surface. Once above ground, it scurries to a nearby tree, house, barn or any vertical wood structure to climb to a safe spot and molt one final time. As the cicada sheds its outer layer, it leaves behind its nymphal skin, which will dry into a hard brown shell. Have you happened upon these shells clinging to your house or tree? A cicada emerged there.

As soon as cicadas shed their skin, they change color from a pale white to brown, black or even green and expand their wings. Now they’ve reached the final, and busiest, stage of their lives. They quickly fly to trees and begin to mate, which involves that loud sound they’re most known for. Male cicadas have tymbals, membranes that stretch over part of their abdominal region. The males vibrate these tymbals to produce that signature high buzz. Some species also beat their wings together to create other sounds. The buzz draws females to the group to mate. The volume of sound can also ward off predators. After mating, females find a suitable branch or twig and lay their eggs. Both males and females die soon after mating, making their adult life aboveground the shortest part of their life cycle.

While annual cicadas add their pleasant buzz each summer, there are a few species that can change that buzz into an ear-splitting screech that can damage human hearing. These are the infamous brood cicadas that emerge in periodic cycles of 13 or 17 years. You may have already read of their emergence this summer in many eastern states. These cyclical cicadas, known as Magicicadas, are unique to the eastern United States. The broods split into numbers and Arkansas is home to two of these periodical broods. Brood XIX, the Great Southern Brood, has been recorded since 1803, and every 13 years, emerges in large numbers, sometimes up to 1.5 million cicadas per acre.

Although that is a stunning number, they don’t have equal distribution across the South. In Arkansas, this brood prefers the White River drainage area in Northwest Arkansas. They have also been spotted in Northeast Arkansas. The next time Brood XIX will emerge is 2024. They’re distinguishable from annual cicadas by a shorter body, yellow or orange stripes on the underside of their body, and red eyes.

The second periodical brood in Arkansas is Brood XXIII, or the Lower Mississippi River Valley Brood. This brood emerged in 2015 and will reappear in 2028 across Northeastern Arkansas, particularly the Crowley’s Ridge area. Although periodical cicadas can be loud, they are not dangerous, unless you happen to walk through a group of them as they’re calling out. Then you might consider some protection for your ears. They also do not damage gardens or bite or sting. They have many natural predators, including copperhead snakes, fish, box turtles, spiders, dragonflies, birds and moles.

Cicadas have a few unnatural predators as well. Dogs will eat them, and cats play with them, of course, before consuming them. A few cicadas probably won’t harm your pet, although don’t let them eat too many. They may have trouble digesting the hard exoskeleton. People are also known to eat them, especially when periodical cicadas emerge and overwhelm an area.

If you’re interested in trying it, they’re best when harvested before they molt. Search around the base of trees in the early morning hours for a white or green cicada. Put them in a bag and freeze your harvest to humanely kill them before cooking. There are recipes for cicadas if you’re brave enough to try them. You can find anything from spicy popcorn cicada to stir-fry to cookies. People report they have a nutty taste and provide excellent protein with few calories. If you have a shellfish allergy, stay away from them. They are related to lobsters and other shellfish.

This summer, if you’re out in the woods, or simply listening from your porch, you’re likely to hear the call of cicadas. Whether you love or hate the buzzing song, it’s all part of summer in Arkansas.