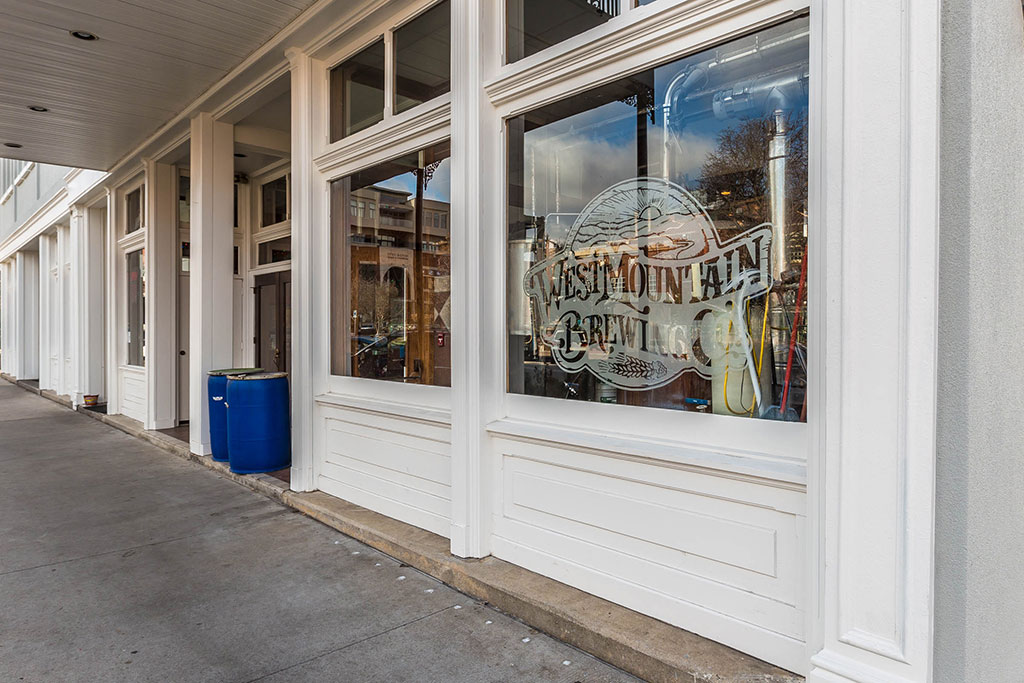 Over 400,000 lights shine in the night sky, signaling the return of the Christmas season in Fayetteville, Arkansas. The downtown square is ablaze with the holiday spirit. Hundreds of people mill about, snapping pictures and drinking hot cocoa.

For many, the night would be incomplete without a stop at Tiny Tim’s Pizza or the adjoining (and affiliated) West Mountain Brewing Co. Inside, families fill tables and thirsty patrons line the bar. Pizza and beer after a stroll around the lighted square have become a Fayetteville tradition.

Finding a place to sit can be a challenge this time of year. You have to exercise patience upon arrival. You’ll probably stand shoulder-to-shoulder with other anxious customers, each ready to pounce on a table as soon as it empties.

To say it’s busy this time of year is an understatement. It’s all the hustling wait staff can do to survive the fever pitch of these December nights.

I’ve been going to Tiny Tim’s Pizza for as long as I can remember. Although I grew up in the Fayetteville area and have seen plenty of places come and go, I don’t ever recall a time when Tim’s wasn’t on the downtown square. In many ways, it has become a safe refuge from an ever-changing world. Comfort can be found in the cracker-crusted pizza and beer brewed at West Mountain (which is connected by a hallway in the rear of the dining rooms).

It is one of the places I frequently spend time with friends and family. There is probably some sentimental bias woven into this story, and for that, I apologize in advance.

Tim’s started brewing under the West Mountain banner in 2011. It was one of the first to do so in Fayetteville. It carved its niche at the very outset of the recent brewing craze. Many breweries would follow, but West Mountain will always be thought of as a brewing pioneer in the city (along with Ozark Brewing Co., and later, Hog Haus Brewing Co. on Dickson Street).

There are some real characters at the bar on most days, spinning yarns during the 4—6 p.m. happy hour. “It’s both ends of the spectrum,” says owner John Schmuecker, who bought the business in 1996 after working there for a decade. “A lot of the professors come down here. My happy hour is an older crowd — there aren’t a lot of college students. Farmers to construction workers, it’s quite a mix.”

For those who enjoy people watching, the brewery side is one of the best views in the state. Schmuecker keeps the volume on the music low, and guitars never strum at West Mountain. It’s supposed to be a place where two people can enjoy their conversation.

The cast of happy hour regulars has mastered the fine art of colloquy. No topic is off limits; no opinion goes unheard. “Sometimes the conversations can get heated,” Schmuecker confesses. Fortunately, most of the people there know how to have a fervent debate, and then turn right around and drink to each other’s health.

West Mountain Brewing Co. — though not an actual brewing company at the time — was Andy Coates’ first introduction to Fayetteville when he moved here in 2010. He helped Schmuecker get the brewhouse up and running after it sat dormant for nearly 10 years. A year later West Mountain released its first beer, aptly named Coming Soon Pale Ale.

Coates remembers the vibe in the brewery during those early days.

“I was there every afternoon when they rolled in,” he says, referring to the happy hour regulars. “They all sit at the bar and talk, and it was that ‘Cheers’ aspect of ‘everyone knows your name.’ I don’t think there are too many bars where that happens on a daily basis.”

Of course, West Mountain is not just a bar. The Tim’s side is more family-oriented, with bright lighting and an open feel. I’ve never felt out of place taking my kids to the brewery side, though. I have shared a table with four adults and twice as many children there more times than I can count.

West Mountain’s reputation for beer continues to grow. And that’s a testament to how its owner handles his relationship with the brewers. Since Coates left in 2013 the brewery has had four others at the helm. Two moved on to other jobs in the industry, one is about to open his own brewery, and another is just starting out. It seems like every year or so Schmuecker is hiring someone new. Yet somehow the brewery doesn’t miss a beat.

“I didn’t think it would be an annual thing, as it has turned out,” he says, referring to the churn. “But I’ve got no problem with it. It’s been a lot of fun scoring guys like Jesse [Gagnon] to come in here.”

Andy Coates was the first and continues to influence

Jesse Gagnon is the newest brewer at West Mountain, but we’ll meet him later in the story. Before we do that let’s think about Andy Coates and the foundation he put in place.

You probably know his story by now. Coates left his cell phone number at the bar one day after blindly wandering in off the street. He asked the manager, Jeanie Wendt, to have the owner give him a call. Coates said he could probably help him get the brewery up and running. Coates was new in town and knew a thing or two about brewing (thanks to gigs at Chicago’s Goose Island and Great Divide in Denver).

“He liked me right off the bat because I’m from Iowa,” says Coates, referring to the moment he and Schmuecker first met. Iowans are much like Arkansans and people from other rural states — that is, they’re hardworking, loyal, and take pride in the abilities of their fellow statesmen. Coincidentally, Mel Cranston, the original owner of Tiny Tim’s, was also from Iowa. He died this past summer at the age of 68.

Schmuecker hired Coates knowing the young brewer was planning to open his own place at some point in the future. There was no false impression that Coates would be there for the long haul. “It was a gentleman’s agreement with Andy,” he recalls. “I needed at least a year or so from him.”

The arrangement worked out great for both men. Schmuecker was finally able to produce beer, and Coates had the flexibility to come and go as he needed while planning his own brewery (Ozark Beer Co., which opened in Rogers in 2013).

“Working for John is really great,” says Coates. “If you know what you’re doing he wants to leave you alone. And he was gracious enough to let us be flexible in terms of schedule.”

True to form for an Iowa boy, he regularly came in at 4- or 5-o’clock in the morning to get a jump on the day’s brewing schedule. Shortly after noon each workday he was free to work on the details of his business plan. “I’d get in, get the work done, and get out,” says Coates. “The flexibility was the biggest thing for me.”

Letting the brewers manage their own time is important to Schmuecker. “You keep me full of beer and you can plan your vacation whenever you want to, that sort of thing,” he says. “It’s all up to you.”

Coates saw other benefits to brewing at West Mountain — it wasn’t just his ability to come and go as he pleased. He had worked at a couple of the biggest craft breweries in America, but there were still some aspects of brewing that he was unfamiliar with. Owning the process from start-to-finish was a first, as was working with a brewing system packed into such a small space.

“I had never done actual recipe development on my own,” says Coates. “At Goose Island, we had an innovation team, but we didn’t really have much of an outlet to make anything different [from the top sellers]. West Mountain was an absolute clean slate. And for better or worse, I had never worked on a system that tiny before.”

Coates was suddenly forced to think about flavor profiles and decide what outcomes he wanted for his beer. “I knew how to make a clean beer, but finding the recipes that people wanted to drink was a different thing,” he says.