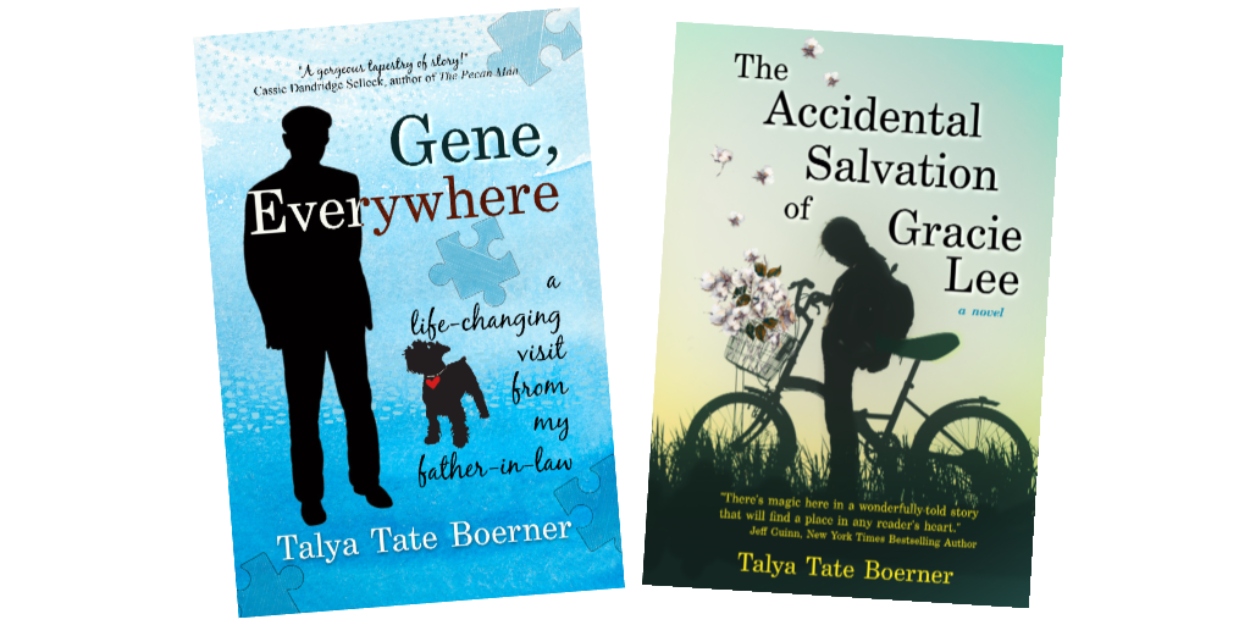 In the winter of 2011, author Talya Tate Boerner didn’t know her life was about to change. Originally from Northeast Arkansas, she lived in Dallas, where she worked as a senior lender at a bank. Her husband frequently traveled for his job, and their son was in the middle of his senior year of high school. Life was extremely busy. Busy was normal, but as Boerner says, “We can’t plan for some things, no matter how much we prepare.”

Boerner’s in-laws lived in Fort Smith, and her mother-in-law, Pauline, fell suddenly ill. She was admitted to the hospital on New Year’s Day, and Boerner realized Gene, her 90-year-old father-in-law, couldn’t stay alone in their Fort Smith home. Boerner “extended a very spur of the moment invitation” for Gene to stay in Dallas while his wife recuperated. He moved in the next day.

Over the next six weeks, Boerner spent more time one-on-one with her father-in-law than she ever had. Gene was a former traveling salesman used to his freedom, but Boerner’s husband and sister-in-law had recently decided to take the keys away. He was beginning to struggle with dementia and some paranoid thoughts. With her husband traveling and her son occupied with high school, Boerner found herself continually challenged by Gene, at first to her frustration. Gene accused his son of stealing his wallet, which Gene had simply left in a bathroom drawer. He let his disdain for the pill sorter Boerner purchased and filled for him be known, and he swore the outside care she hired was hitting on him. Gene was still himself, “funny and sweet, a little snarky.” He was deeply worried about his beloved wife, and he hated the thought that he needed a “baby-sitter.”

As the weeks passed, they brought new adventures. Boerner started to realize the extraordinary relationship she was developing with her father-in-law. “In our society, we so often dismiss the elderly, believing a 90-year-old has nothing left to contribute. My father-in-law completely changed my life.”

Gene returned home after six weeks, but life didn’t return to its routine, at least not in Boerner’s heart. She’d had her “aha” moment, where suddenly everything looks different, though physically nothing has changed. Soon after, she left her job in banking to pursue writing the stories embedded in her heart. She knew these stories included Gene.

The Boerners moved to Fayetteville, and Talya’s first book, “The Accidental Salvation of Gracie Lee” was published in 2016 by Southern Yellow Pine Publishing. Her debut novel told the story of 10-year-old Gracie Lee, a young girl growing up on a farm similar to the one Boerner grew up on in Northeast Arkansas between Osceola and Keiser. Boerner’s debut novel won several awards, and she enjoyed writing a fictional story tied to her own childhood, but she decided to go a different direction with her second novel. It was time to write the story that had made her a writer in the first place. It was time to tell Gene’s story.

“Gene, Everywhere,” captures the time Boerner spent with her father-in-law those fateful six weeks that changed her life. The memoir explores what it means to be adult children increasingly caring for aging parents, the exploits and adventures surrounding that time, and that time itself grows shorter as we age. As Boerner recounts life with Gene, she reveals her yearning for life to change, too. It’s a story unique to Boerner and Gene, but one that speaks to all of us.

As different as “Gene, Everywhere” is from her first book, so is its journey to publication. Boerner wasn’t certain if she wanted to pursue a literary agent and publication through a traditional publishing company, but she knew she needed a book proposal. In the summer of 2019, she began reading and researching books similar to “Gene, Everywhere” to gain a more thorough understanding of where her book fits within the market. She also created a marketing plan and developed a contact list of agents and editors. Once she completed the book proposal, the answer seemed both obvious and unexpected. She would establish her own press and publish Gene’s story herself.

“Starting a publishing company was the natural next step for me. The ironic thing—If I’d not spent so much time writing a proposal no one ever saw, I don’t think I would have made the same decision to start One Mississippi Press, LLC.”

One Mississippi Press is a nod to Boerner’s roots in the Arkansas Delta, where her family still farms. Creating her own company gives Boerner much more control over her books, from book covers to profit margins. The book business is tough, and profits are razor-thin, but with her background in business and banking, Boerner feels comfortable taking on the challenge.

Creating a book from start to finish involves much more than the writing process. Still, Boerner has discovered she enjoys writing book blurbs, handling social media, cover design and keyword analytics. She reacquired the rights to her first book, “The Accidental Salvation of Gracie Lee,” and launched it from One Mississippi Press, LLC, within a week of the release of “Gene, Everywhere.” The process of learning how to format the books across several different platforms proved challenging, as well as the double launch. However, both books are now available in hardback, paperback and e-book formats. “Holding my finished book in my hand will never get old,” Boerner states. “Knowing I created the book start to finish under my own publishing imprint is a huge thrill.”

One final challenge no one anticipated was launching her publishing company’s first book in the middle of a global pandemic. Like many authors and artists, Boerner had to cancel author events and appearances. Book stores have placed orders on hold as many independent booksellers closed up shop and people wait out the crisis in their homes. “On the flip side, maybe people are reading more. Time will tell. We can’t plan for some things, no matter how much we prepare.”

The day Gene stepped into her kitchen in 2011, Boerner wasn’t prepared for how much her life was about to change, but she embraced it. It’s the unexpected events in life that challenge us the most and hone who we are and who we want to be. “Gene is the reason I left a successful banking career to write. And I wrote my first book at age fifty. It’s never too late to do what you were meant to do,” Boerner states. Now, Gene’s story is available everywhere to inspire others to take those next difficult steps, to laugh in the midst of crisis, and to enjoy being with loved ones, no matter the challenges.

Visit talyatateboerner.com to learn more about the author and order the book. “Gene, Everywhere can also be found in online bookstores and ordered through your favorite independent shop.

Arkansas has some wineries to rival any in the country or around the...

In the southwestern corner of Arkansas, there is a park named for a Dutch...