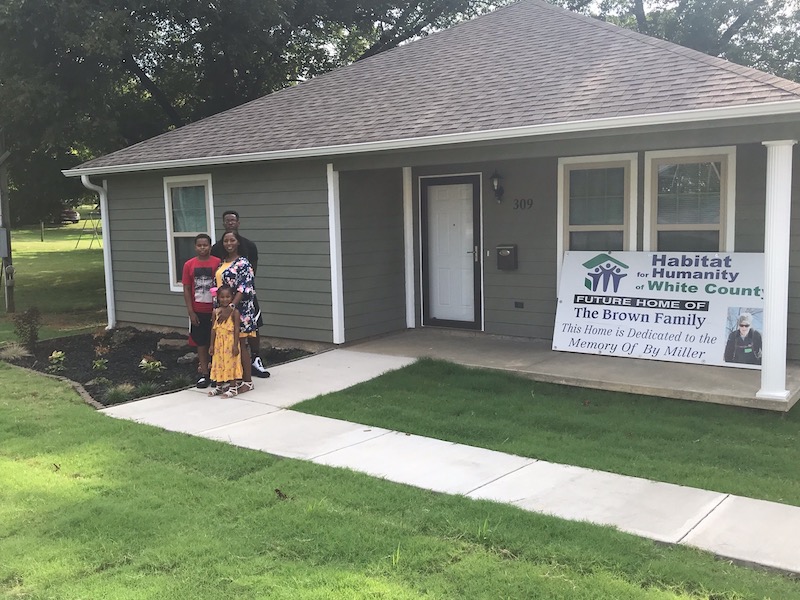 Tiffani Brown, a bank teller at First Security, is a mom who has always gone above and beyond to provide for her children. Even while working two jobs, Brown could only afford a small two-bedroom apartment for her family in Searcy. With two preteen boys and an infant daughter, space and privacy were commodities they didn’t often experience. Still, Brown managed to pay her bills, feed and clothe her kids and even owned a car. Considered well above the poverty standards but stuck in a situation of barely making ends meet, she was paying month after month for a rental that would never become her own.

And then a friend suggested that she apply for a partnership home through Habitat for Humanity of White County, Arkansas.

Owning a home might be the American dream, but current trends indicate that four out of every 10 Americans will never achieve that dream. Fortunately, there are programs available that can help people who thought homeownership was unattainable to overcome the odds. For Brown, the dream became a reality when she and her family moved into their brand-new home, thanks to a little help from Habitat for Humanity.

Although the organization wouldn’t be officially formed until 1976, founders Millard and Linda Fuller built the first partnership house in Georgia in 1969. Since then, Habitat for Humanity, which now operates in all 50 states and 70 countries, has assisted more than 22 million people worldwide to “achieve strength, stability and independence through safe, decent and affordable shelter.”

Leigh Anne Hawthorne is the Affiliate Manager for Habitat for Humanity of White County.

“We are actually struggling to find applicants for homes right now. I’m not sure if there is a stigma surrounding [Habitat for Humanity], but these homes are designed for working people with good credit who pay their bills and are just struggling to get ahead.”

Hawthorne says that Habitat looks at three areas when selecting applicants: credit, need and income. Families aren’t required to have a perfect credit score, but they need to demonstrate a trend of paying their bills on time. Need is determined by assessing whether the current housing situation is appropriate for the family, as well as the safety of their current location. Qualifying families are also typically above what is considered the poverty line. Because families will be expected to make monthly payments on a mortgage, they will usually need to be employed. The target income range for a qualifying family of four is typically between $28,000 to $45,000 per year.

“People feel like they shouldn’t apply because they think Habitat for Humanity is designed for families in deep poverty, but that is not the case. The most likely applicant is actually someone above the poverty line who is working full time but can’t save enough for a down payment on a home. We’re looking for people who will be comfortable owning a home and can handle situations like a roof leak, realizing they can’t just call up a landlord.”

Habitat partnership home recipients don’t get a free house. Recipients must first complete 300 work equity hours, which White County residents can achieve by working at the Habitat Re-Store in Searcy, assisting with building projects for other recipients or assisting in their own build. Habitat funds the building project, and once the home is complete will sell the house to the recipient for a very discounted rate. In White County, the average cost is between $60,000 to $70,000 and is covered by a 25-year, 0% mortgage. The difference between the cost value and the appraised value of the home is put into a second silent mortgage for ten years. The second mortgage is forgiven at a rate of 1/10 per year. And as long as the homeowner doesn’t sell the home during that time, the debt is completely erased.

Tiffani Brown was surprised to learn that she was a perfect candidate for a new home through Habitat for Humanity when her application was accepted in late 2014.

“Our apartment was so small, and I found out we would be getting a four-bedroom home. I was in tears because each of my kids would have their own room!”

Brown’s situation was unique in that she would be getting a house that was a little larger than Habitat typically builds. Project delays prevented breaking ground on a new home. A family hardship, a move in with her grandmother and a separation from her son created additional stress. When word came that construction would finally happen, Brown couldn’t have been happier. Like many Habitat for Humanity recipients, she was actively part of the work.

“I was very involved with the whole process. I got to look through floor plans and work with the builder to make changes. I went during my lunch break from work to paint and caulk, and I even got to help put up some of the walls. My kids came and helped with painting, and we got to work with church groups and other volunteers.”

Unlike on TV, her home was not built in a day. From the pouring of the footing until she began moving in, construction took just under a year. Hawthorne praised Brown for her extreme patience through the unusually lengthy process.

“Owning a home is the American dream, and Tiffani proved to everyone that anyone could do it. She was so patient and determined.”

Brown and her three children have been in their new home for a little over two months.

“I can’t even describe it! [It’s] just having my kids all with me. We’re all right there together. It’s wonderful, and there is nothing like having your own [home].”

Habitat for Humanity of White County recently received a grant through the Arkansas Development Finance Authority, which will allow them to build four homes. They are working with several families, one of whom will become Brown’s next-door neighbor, but are still searching for another qualifying family. Hawthorne hopes that people who need what HFH offers will realize that there is no fault on your pride in seeking help to achieve a dream.

Families in White County can learn if they qualify but filling out a brief online application or by calling 501-268-5589. Arkansas residents outside of White County should contact their local Habitat for Humanity affiliate.

Habitat for Humanity can provide low-cost homes to qualified applicants thanks to the help of volunteers who contribute “sweat equity,” businesses and individuals that donate materials and skilled, licensed contractors, plumbers, builders and more who volunteer their services or provide them at a discounted rate.