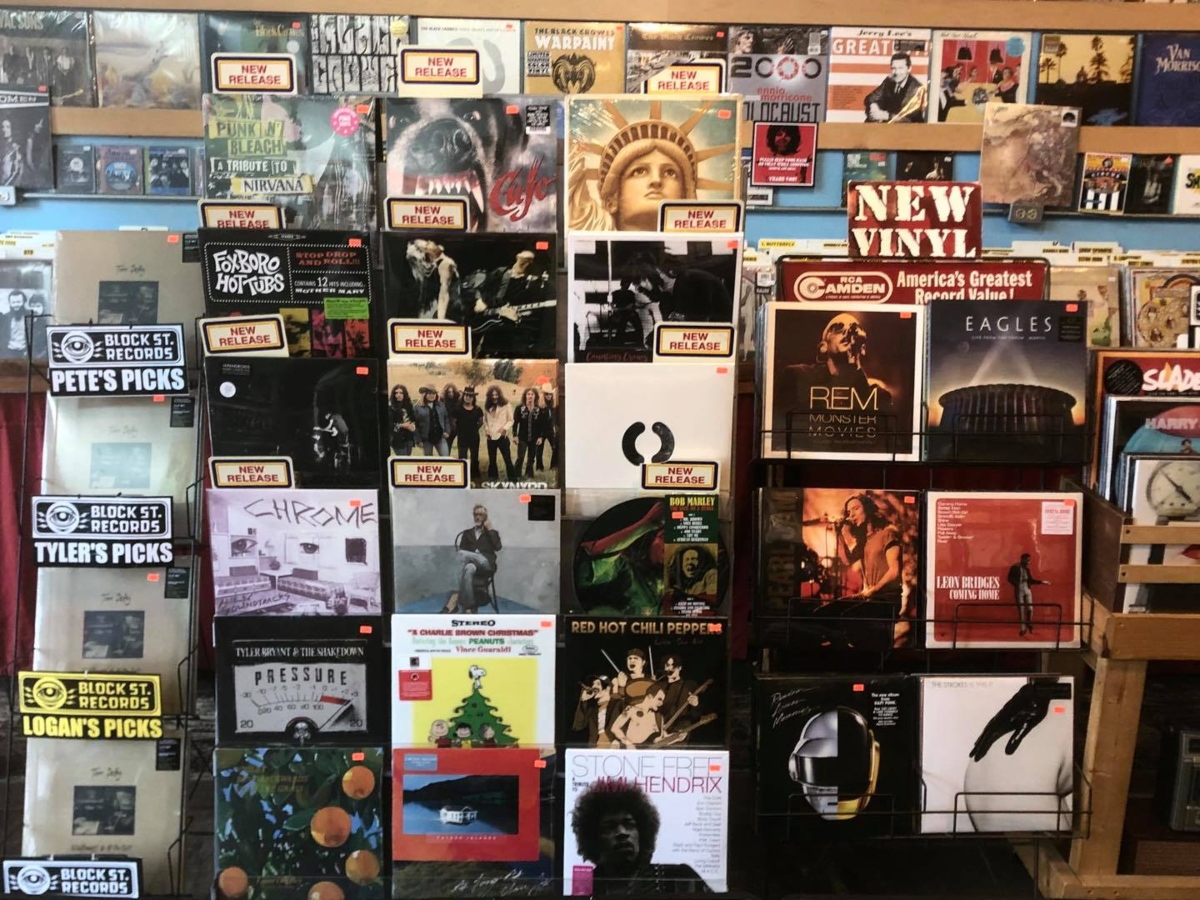 In the 1950s, 60s and 70s, heading to the local record store to flip through racks of albums was the favorite pastime of teens and young people. These stores were vibrant social centers where you could pick up the latest albums, have debates over the best bands, and even flirt across the racks with another shopper. Cassette tapes and 8-tracks began to dig into that market in the 1970s, but when compact discs hit the market in 1982, they quickly cut into vinyl record sales, which peaked in 1981 at 1.1 billion albums. By 1989 sales fell to 450 million and continued to tumble through the 1990s and into the new millennium. Then digital downloading and music streaming arrived and it seemed records were doomed and record stores, when you could find one, were simply nostalgic reminders of a simpler past. However, in the midst of the digital age, independent record stores are making a comeback.

Records were first invented in the late 1800s by Thomas Edison and Emilie Berliner. Edison produced the phonograph, which recorded sound on a cylinder and played it back. Berliner introduced the gramophone and flat record as a means of playing back recorded sound. In 1906, the Victrola hit the market, allowing people to buy their own machines to play music at home. The demand for records grew and stores began selling them, either as an added value to existing storefronts, or taking the form of an entirely new business, the record shop. In 1948 Columbia introduced the 12-inch, long-playing (LP) album, and record sales soared. Buyers also loved the cheaper 7-inch single albums that allowed them to get their hands on the latest hits and play them over and over again.

Around 2000, the ability to digitally download music from cds to devices created a shift in the music market. As iPods, MP3 players and then smartphones allowed music lovers to simply choose their songs and download them directly, album sales continued to drop and music stores began closing. Large record stores like Sam Goody and Tower Records, staples for decades in the music scene, went bankrupt. At the same time, digital streaming services like Spotify and Apple Music lured listeners to their services. It was beginning to look like album sales, and certainly vinyl record sales, were dead.

Then an interesting phenomenon emerged. People began buying vinyl albums again. In 2007, as streaming took off and cd sales nosedived, vinyl album sales jumped. Sales of records, both used and new, have continued to climb every year, although streaming services still account for 85% of music sales. In 2020, vinyl album sales overtook cd sales for the first time since the 1980s. A small, dedicated market is reviving demand for the 12-inch albums, complete with beautiful cover art. Those fans are bringing back something else that had almost disappeared – the record shop.

Block Street Records in Northwest Arkansas is one locally owned business enjoying the resurgence of love for vinyl records and the record store experience. Wade Ogle started Block Street Records in 2014 in Fayetteville. He’s a lifelong music fan and began purchasing his own records at 8 years old. He had dreamed of owning his own shop and found the opportunity, and a growing market, in 2014. The shop, located on Block Street, caters to those looking for new and vintage vinyl albums, cds, tapes plus extras like posters and t-shirts. Independent music stores like Ogle’s aren’t just selling music, they’re selling the experience lost to streaming music and digital downloads. Up the road from Block Street Records is Big Fish Vinyl Records and Uniques in downtown Springdale. Big Fish Vinyl opened in 2015 and deliberately echoes the feel of a 1970s record shop. Nearly all of their inventory is vintage, but they have a selection available online and offer in-store pick-up or shipping.

The unique aspect of this new wave of vinyl album devotees is their age. Though some are Baby Boomers looking to revive their record collections, which have either gained a lot of dust, or more likely, were cast off years before, many buyers are young. This follows a worldwide trend of millennials and Generation Z seeking to create their own album collections, an experience they never had as children. What is driving this dive into vinyl records when digitally downloading music or streaming makes music more accessible than it has ever been? The reasons for this are myriad. Newly pressed records are now made from digital recordings, boasting a superior sound quality to both streaming music and their older vinyl counterparts. Many vinyl buyers prefer the analog sound a record offers, complete with the tic of the needle and occasional crackle. They point to the greater warmth a record brings to the song.

There is also something special about owning a collection, especially one that can be organized and shown off to friends, and more importantly now, on social media. Another reason is that some artists just aren’t being reissued on streaming services, making these older albums extremely valuable in a way digital downloads never will be. The final reason, though, for the newly minted success of vinyl and indie record stores, is the simple act of walking into a shop filled with racks of promising finds.

Vinyl album fans queue for Block Street Records to open on a Saturday.

“Our store, or any good store, isn’t just about what’s on the shelves. It’s a great experience to be in a good record store. It’s part of the community. It’s fun. Streaming has its place. But, it’ll never compare to actually digging through bins to find that one special record,” Ogle says.

Creating a small business is never easy, but somehow, Ogle has found a way to make it work. He opened a second store in Bentonville two years ago under the same name. Since opening, the store has racked up positive reviews, from album selection to atmosphere and staff friendliness, which all reflects the community feel Ogle loves. Though being an indie record shop comes with a lot of anxieties, he enjoys helping customers discover music for their growing collections. “Personally, I love finding awesome collections and then promoting and presenting them to the public and seeing them react enthusiastically. It’s a great feeling seeing someone get that special record they’ve really wanted.”

That community feel is a vibe that runs through the independent record shops in Arkansas. At MoJo’s Records in Eureka Springs, customers come for both the great selection of vintage vinyl and the cafe and outdoor seating. At Flashbacks Retro Shop in Mountain Home also plays along this vintage theme, as their name implies. In business since 2003, the shop offers a large selection of vinyl records, but also many fun vintage items for your home. If you’re in Helena, Arkansas, a visit to Bubba’s Blues Corner will lead to an education in the Blues as well as a hard to find selection of music curated by shop owner Bubba Sullivan.

For those that step into an independent record shop, perhaps what is wanted isn’t just an album, but that feeling of stepping back in time when music could not only be heard but felt in the form of a 12 inch album and discovered while passing a Saturday afternoon flipping through racks of music.

Photos courtesy of Block Street Records and used with permission.

The Pentagon’s recent admission that footage of a UFO taken by a Navy...

After a year of online or postponed events, Conway is kicking off its...

It’s spring in Arkansas. Trees are budding, flowers are blooming and...