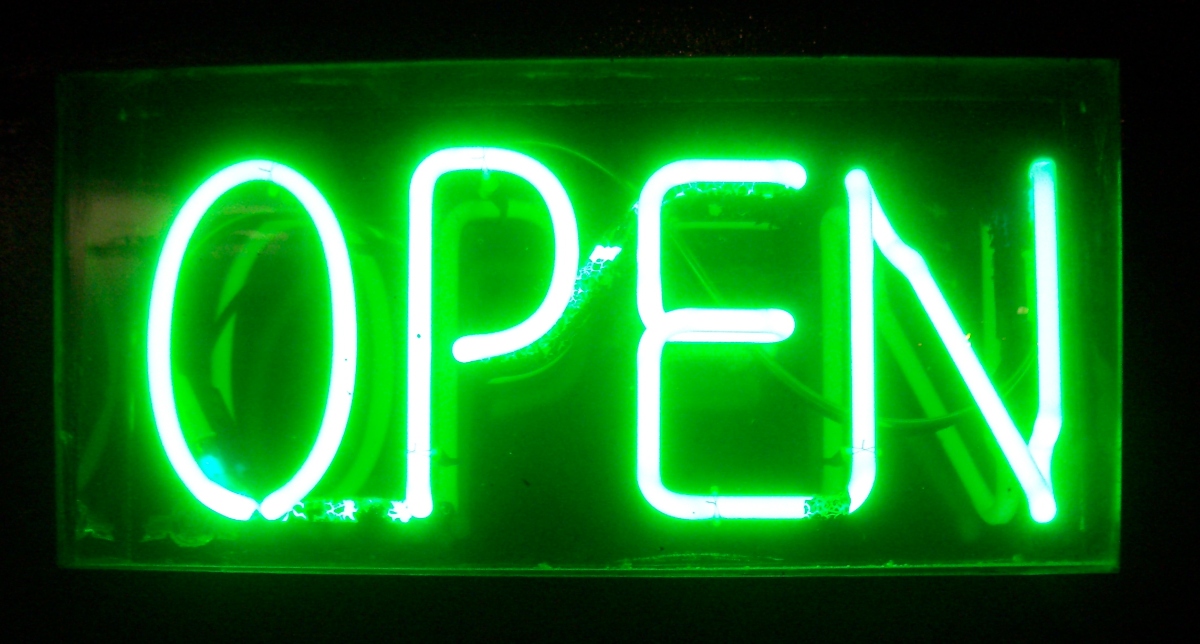 Signs are such a part of our everyday lives, we don’t often notice them, unless we’re specifically looking for one to guide us to a destination. They advertise, advise and direct, all without being recognized. For Ken Jones, signs aren’t simply a way to find a place, they’re central to his life. His father, Ken Jones, Sr., established Ken’s Signs in 1979 in Springdale. There has been a Ken in the sign business ever since.

Ken Jones, Sr. started out in portable signs – think fireworks stands and flashing arrows. The sign business did well enough that he was able to sell it after five years, but by then, the sign business had worked its way into his blood. With the sale of the portable sign business, he’d agreed to a stipulation that he would not go back into portable sign sales. With that limitation, he decided instead to purchase a bucket truck, giving him the ability to service permanent signs in the area.

For a while, it was a one-man show as Ken Sr. repaired signs around Northwest Arkansas and the state. Then he hired an employee to service the signs while he focused on building the sign business. It was a focus that paid off. Soon Ken’s Signs was able to buy out other sign companies, as well as adding to an expanding customer base. The business now could not only repair signs but also manufacture them.

Ken’s Signs can do it all. They feature awnings, LED message centers or lighted signs, neon signs, banners, windows and graphics, sandblasted signs and even traffic signs. Neon signs have an interesting history, though their use has faded with the introduction of LED signs. Neon first came into use around 1910, when Georges Claude displayed them at the Paris Motor Show. The signs grew in demand until they lit up the night in cities and roadsides across the world. In the U.S., neon signs became synonymous with road trips as the colorful signs lit up diners, pointed the way to hotels and welcomed drivers into the city and all its attractions.

Photo By Paul K, Neon Museum  This Hacienda Cowboy neon sign graced the entryway of the Hacienda Hotel and Casino in Las Vegas before it was demolished.

Once light-emitting diodes (LEDs) became popular, the use of neon lighting fell rapidly. Many cities have been left with old, oversized neon signs no longer in use. However, the signs can still be serviced and used, a service Ken’s Signs performs. The company started servicing neon signs in the late 80s, well after the boom of neon lighting. The company also uses an LED alternate to neon, made to mimic the bright look, but using a lower voltage that is safer than the gas lighting. “We still get the occasional request for new neon signs, about five or so per year, but there is still tons of neon out there that has to be serviced, so I don’t see it going away anytime soon,” says Ken Jones, Jr.

In 2005, the Daisy Airgun Museum in Rogers asked Ken’s Signs for help in relocating and refurbishing their existing neon sign. The museum moved to its current location on Walnut Street in downtown Rogers. The project was intense as it involved hand tracing the existing font, sanding down the sign cabinets, priming the frame and hand painting the signs with acrylic paint. Then Ken Sr. and Ken Jr., both involved in the project, made all new neon and installed a flashing system for the incandescent bulbs to mimic a BB shot hitting the bull’s eye in the middle of the D. “It was a fun project to work on and we enjoyed seeing it go up and preserving a piece of Rogers’ historic history,” Ken Jr. recounts. The Daisy BB guns sign is one neon sign that won’t be lost or discarded for a long time, thanks to the detailed work the father and son team put in.

Despite the fact that neon no longer lights up the night the way it once did, signs still play an important role in the vibrancy of any business. Ken’s Signs has expanded its service area to include all of Arkansas, Oklahoma, Missouri and parts of Kansas. They’ve also gone from a one-man show to employing 15 to 20 people on average. What is the secret to keeping a business running for over 40 years? “We put the Lord first, we absolutely would not be where we are today without Him. We love what we do, passionate about our staff and our products. Our clients trust us to deliver a brand for their business, we take pride in that responsibility,” says Ken Jr.

Ken Jones, Jr. took over the business 18 years ago, but he continues to adhere to the vision set by his father that has made the sign business so successful. In addition, he purchased more equipment to make the company more efficient, started focusing on mostly LED products, and started selling and servicing electronic message centers. “We’re going to make a great product regardless of size, style or price point. All we need is an idea, what they are envisioning, then we take it from there. Design, fabrication, paint, neon, LED, vinyl, foundations, installation & service, we’re here from start to finish, and then some.”

Even in this digital age, we still need physical signs to point the way, whether they’re the bright neon lights of a bygone era or an electronic message board. There’s a company and a story behind each one, and behind that, you’ll often find Ken’s Signs.