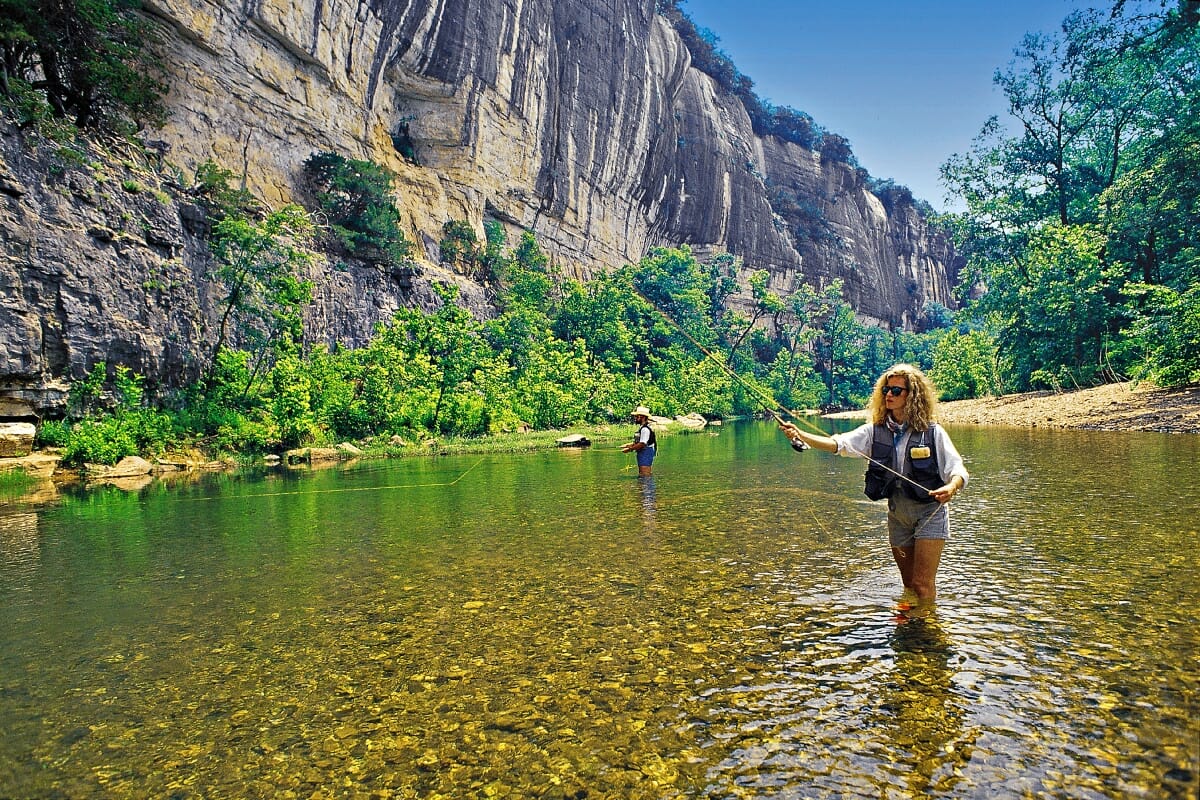 Arkansas is well known for its beauty. The Ouachita and Ozark Mountains are magnets for hikers, mountain bikers and nature enthusiasts. The rolling agricultural land of the Delta and Eastern Arkansas has a beauty of its own. Crowley’s Ridge offers interesting biodiversity. However, Arkansas’s waterways are one of the state’s most valuable resources and bring a beauty of their own. From its many lakes to the Arkansas River Valley and White River, and down to the smallest stream, the waterways in Arkansas are a treasure to be cared for and protected. The Stream Team from the Arkansas Game and Fish Commission takes on this important mission. And as a mostly volunteer network, it counts on Arkansans to keep Arkansas streams healthy.

The Stream Team is operated out of the Arkansas Game and Fish Commission, where Tim Burnley is the stream team coordinator. Burnley oversees a program responsible for the more than 90,000 miles of Arkansas creeks, streams, rivers and springs. The program exists to educate Arkansas citizens on the importance of the waterways and encourage them to get involved, especially with the waterways closest to their homes. Education is one component, and Burnley says they work with many school groups, but schools are not their only priority. “We use the network of Master Naturalists around the state. They do more of our advanced work over water quality.”

Master Naturalists are citizen scientists and volunteer educators trained in a wide variety of areas involving the natural world. They’re a perfect pairing for the Arkansas Stream Team. However, the Stream Team also works with volunteers who advocate for the health and restoration of Arkansas and careful stewardship. Volunteers can range from clubs and organizations to individuals like landowners concerned about waterways on their property. Members can participate in stream clean-ups, attend municipal meetings to advocate for waterways, and even help rebuild eroding stream banks.

The No. 1 source of pollution in Arkansas waterways is sediment. When erosion occurs on riverbanks, flooding carries the sediment downstream. One example of this was on the Mulberry River in Northwest Arkansas. The river is known for white water floating, but its rapid waters were cutting into the land. Kathy Brown’s family has lived on the Mulberry River since the 1800s, when her great-grandfather received a land grant. She was rapidly losing land through flooding on the river. It was claiming trees as well. Brown had lost two to three acres of pastureland to the encroaching water. Brown contacted the U.S. Forest Service, who directed the call for assistance to the Arkansas Game and Fish Commission’s Stream Team.

The Stream Team came in with two goals for the project. They wanted to help Brown stabilize her riverbanks to avoid further erosion. And they wanted to improve fish habitat in the river. The Mulberry is home to a large number of smallmouth bass, which rely on deeper water for habitat. When erosion widens the river, it carries away habitat and creates a shallower riverbed, which warms the water temperature. Smallmouth thrive in clean, cool water. The AGFC estimates that the state has lost at least 25% of its smallmouth bass streams to situations like this. The erosion and sediment in the Mulberry combined with warmer temperatures were damaging to the smallmouth population.

The AGFC devised a plan to install a small dike to divert the water towards its original course, away from the eroding banks. Then they laid six veins of rocks upstream. These rock beds were carefully placed to bring the river back to its former course. Once the project was complete, they also planted native Arkansas trees and flowers along the eroded banks to stabilize the soil and create a better riparian zone. These zones border rivers and other bodies of water and create favorable conditions for vegetation along the river, and actually capture and hold water during flooding, which allows for a slower release.

Finally, the AGFC added a fence to keep cattle from crossing into the zone and grazing near the river. The AGFC worked together with the National Forest Service, which cares for the land around Brown’s, and the project was mainly funded through a SARP grant, or a Southwest Aquatic Resource Partnership, which is given through the U.S. Fish and Wildlife Service. The project was completed in 2016 and put to the test in 2017 when spring flooding hit the Mulberry. The rock veins held, and the newly-planted vegetation did as well, and had even increased as it began to take back land lost to river and pasture.

Kathy Browning’s farm is one example of how the Stream Team can assist landowners or those concerned with Arkansas waterways. The Stream Team can assist with eroding waterways, damaged low water dams, replanting stream banks with native trees and flowers, litter clean-up, water quality monitoring and improving fish and wildlife habitats along the waterways. In addition, there are several funding options to assist landowners and community members who want to improve waterways. Burnley recommends anyone with a project in mind first contact their local Stream Team coordinator, which can be found through the AGFC website.

Stream Team Coordinators educate volunteers on water monitoring, bank repair, riparian area management and best practices on maintaining clean waterways. They also offer a wide variety of webinars for different groups ages. The Stream Team also provides an advocacy toolkit to help those interested in advocating for the care of Arkansas’s waterways, whether it’s in schools, clubs, municipal governments, or to increase knowledge on how to speak up for cleaner, healthier waterways in Arkansas.

If you want to join the Arkansas Stream Team as a volunteer, visit the Arkansas Game and Fish Commission website and fill out a form. A coordinator will contact you. The AGFC is also hosting a virtual seminar on Aug. 10 called “Introduction to Stream Teams.” Participants must register for the online event, and it is free.

The next time you explore an Arkansas stream, creek or waterway, and you realize it might need rebuilding, cleaning or better wildlife habitats, contact the Arkansas Stream Team. Participate in one of the most important, but perhaps overlooked, resources in our state.