The Year in Arkansas Beer 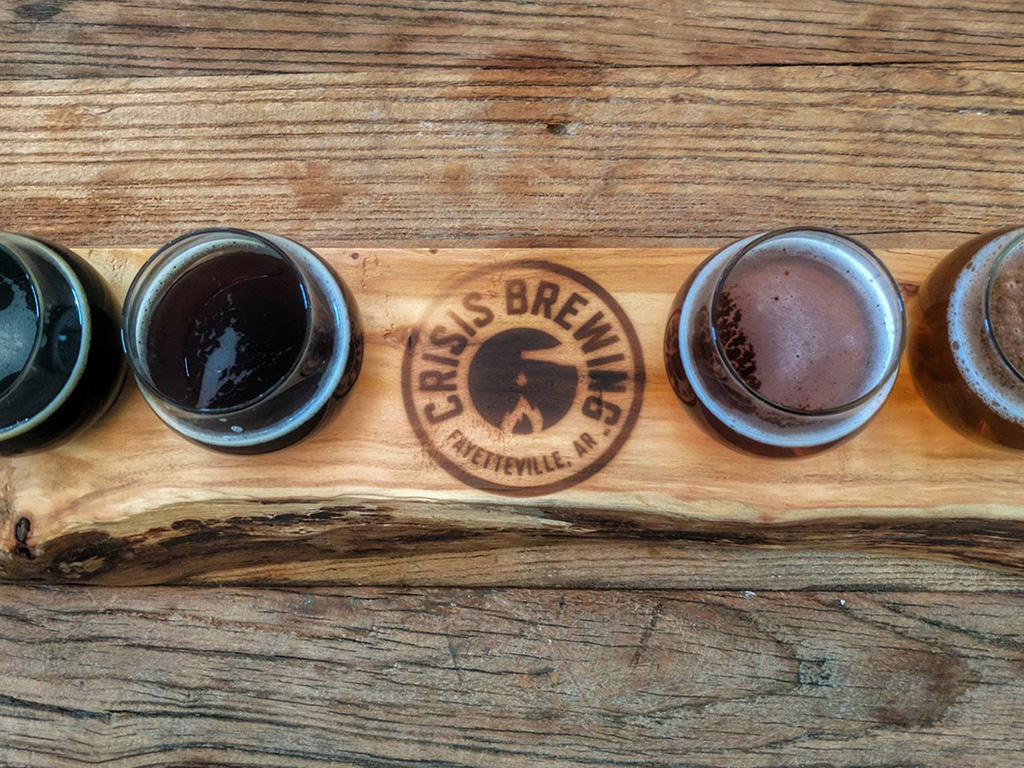 2018 was a busy year in Arkansas beer. New breweries opened, existing breweries expanded, and the state’s brewers made some outstanding beers along the way.

Most of the breweries that opened this year are small in nature, and many are located in rural areas of the state. Crisis Brewing Co. got things rolling in Fayetteville back in April. Its tiny taproom — adjacent to Penguin Ed’s Bar-B-Que — has been selling a lot of Fayzed IPA ever since. Slate Rock Brewing launched in April as well. It calls tiny Amity, Arkansas (population 700) home. Another small-town brewery opened in June. Norfork Brewing Co. is situated near the lake in Baxter County that shares its name. Two breweries in Northwest Arkansas opened on the same day in September — Hawk Moth Brewery & Beer Parlor in Rogers and Ivory Bill Brewing Co. in Siloam Springs. And rounding out the year in new brewery openings, Six Mile Brewery set up shop in Ozark and Country Monks Brewing started brewing in Subiaco.

Expansion was the name of the game for several existing breweries. Rebel Kettle Brewing Co. signed a lease on more than 50,000 square feet of brewing space on 17th Street in east Little Rock. The plan is to shift production to the new facility and maintain the existing brewery and taproom for over-the-counter sales. Fossil Cove Brewing Co. in Fayetteville installed a new 20-barrel brewhouse a few doors down from its original location. The added capacity should help the maker of La Brea Brown and IPA #3 keep up with demand. And in December Bentonville Brewing Co. announced a return to its namesake town by breaking ground on a new 20,000-square-foot brewery and taproom. It hopes to make 8,000 to 10,000 barrels of beer once settled into the new location next year.

The news wasn’t all positive in 2018. In August we learned that Saddlebock Brewery is for sale. Personal circumstances and rising input costs led owner to Steve Rehbock to seek a buyer for his 15-barrel brewhouse in Springdale. Downtown Fayetteville’s Hog Haus Brewing Co. shut its doors in October after 24 years in business (it opened as Ozark Brewing Co. in 1994). The new owners are thus far tight-lipped about the property’s future. Two Arkansas breweries are facing legal battles that may impact their future. Bike Rack Brewing Co. in Bentonville is untangling the interests of conflicted owners, and Blue Canoe Brewing Co. is doing the same in Little Rock. Rumors out of the capital city suggest that Blue Canoe, which started canning its beer earlier this year, recently halted brewing operations. Damgoode Pies appears to have stopped brewing as well.

On a more positive note, there was an uptick in quality beer made in the state this year. In May Lost Forty Brewing Co. won medals at the World Beer Cup for Double Love Honey and Wild Barrels #5. The Little Rock brewery, which opened in 2014, is currently the state’s top beer producer by volume. Also in May, Ozark Beer Co. in Rogers released another year’s edition of Barrel-Aged Double Cream Stout—or BDCS for short. Ozark was recently named the best craft brewery in Arkansas by Thrillist.

In other Arkansas beer news this year, Guy Fieri took his popular Food Network show “Diners, Drive-Ins and Dives” to North Little Rock to visit Flyway Brewing Co. Chef Georgina Jones showed off her pretzels and gumbo cheese fries in the episode. In September Core Brewing Co. announced that founder Jesse Core was stepping down as CEO to focus on investor relations and brand ambassadorship. The Springdale brewery also promoted two brewers — Ron Schmidt and Rodrigo Medina — to bigger roles in the brewhouse, and adjusted its lineup to focus on hoppier beers. And in a bittersweet turn of events, Josiah Moody left Bike Rack to revive his Moody Brews brand in Little Rock. He is currently using Vinos as home base.

To round out the year, Arkansas brewers rallied to support Sierra Nevada Brewing Co. and victims of the devastating Camp Fire. The revered Chico, California brewery provided the malt and hops for a traditional American-style IPA, with 100% of the proceeds from local sales going towards relief efforts. According to the Arkansas Brewers Guild, Gravity Brew Works, Superior Bathhouse Brewery, Diamond Bear Brewing Co., Fort Smith Brewing Co., Buffalo Brewing Co., and nine other state breweries signed up for the Resilience IPA project.