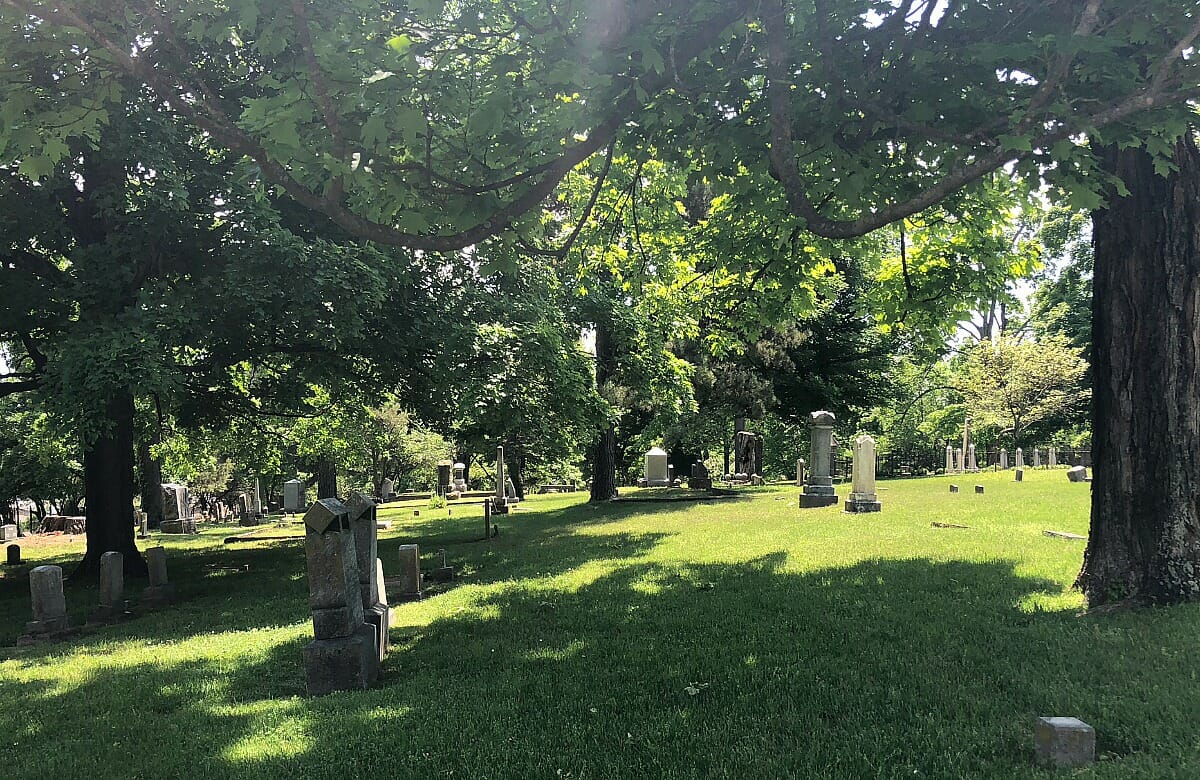 One of my favorite ways to learn the history and culture of a place is to visit the area’s oldest cemetery. In Fayetteville, historic Evergreen Cemetery, located a stone’s throw from the University of Arkansas, is the burial ground of early settlers, soldiers, statesmen, bankers, doctors, educators — a variety of folks who made a difference in Arkansas and the world. Evergreen Cemetery was originally the private family graveyard for the John Thomas family. The Thomas family lived in a home located where the Frisco Depot is on Dickson Street. The grave was at the back of the farm.

In 1870, the Masons and Odd Fellows Lodges purchased the 4.5-acre property for the burial of their members. A portion of the cemetery was reserved for private citizens, and another section was set aside for paupers. Records reflect 3,000 known graves, a Who’s Who of extraordinary Northwest Arkansas people and stories.

The cemetery was added to the National Register of Historic Places in 1997 and continues to be a private, nonprofit organization administered by a board of directors. A full-time caretaker maintains the grounds, and a group of volunteers cleans tombstones.

Let’s talk of graves, of worms, and epitaphs. (William Shakespeare)

I like to think of cemeteries as a repository for history, names of the deceased preserved rather than forgotten. Just as I walk through the aisles of the Fayetteville Public Library looking for a book title or an author’s name to catch my eye, I stroll through Evergreen Cemetery, admiring cemetery art and architecture, reading epitaphs.

Going by, you try to be as quiet as possible, better to let them sleep. (Bob Dylan)

Even a small sampling of the graves at Evergreen Cemetery represents incredible history far removed from my present life. Their truth doesn’t seem real.

Sophia Sawyer (1792 — 1854) was a missionary and educator who defied the law and public opinion to teach Cherokee children in Georgia. When Chief John Ridge and his wife, Sarah, were forced to relocate to Oklahoma Indian Territory, Sawyer accompanied the family and served as a tutor. After John Ridge was killed, Sawyer fled to Fayetteville where she continued teaching Cherokee girls. She eventually established the Fayetteville Female Seminary in 1839.

Perhaps the most prominent educator buried at Evergreen is math genius John C. Futrall (1873 — 1939). Futrall was the longest running President in the history of the University of Arkansas (twenty-five years). Many of the buildings on campus were constructed during his tenure. He was killed in a car accident in West Fork. Upon his death, an editorial quote from the Arkansas Gazette described Futrall as destined to become, more than any other single man, the builder of the institution which caps and completes the structure of educational facilities provided by this state for its sons and daughters.

Archibald Yell is perhaps one of the more colorful characters resting in Evergreen Cemetery. He volunteered at the Battle of New Orleans, served as District Judge of the Arkansas Territory in 1832, was the first member of Congress from Arkansas, and the second Governor of Arkansas. Serving with Colonel Zachary Taylor, Yell led the charge in a battle against the armies of Santa Anna where he died. He was buried in a tin coffin near the battlefield, moved five months later to his family burial ground, and moved a third time in 1874 by the Masonic lodge to Evergreen Cemetery. After years of neglect and vandalism, Archibald Yell’s damaged obelisk monument is in the process of being replaced. (Installation and public celebration of the new memorial will be announced soon.)

Fayetteville certainly wouldn’t be the city it is today without Lafayette Gregg (1825-1891). Gregg, an advocate of the Union, served as a Colonel in the Fourth Regiment, Arkansas Federal Calvary. He led the bond issue campaign to promote the location of the University of Arkansas in Fayetteville (rather than Batesville or Little Rock). Gregg’s obelisk-shaped, zinc monument is one of the most impressive in the cemetery. Old Main can be seen in the distance, appropriate since he played an instrumental role in the construction of the building.

As you walk by, you may not notice the nondescript marker of Edward Durell Stone (1902-1978). His name may not ring any bells either. His legacy, however, is long-lasting. Stone, a twentieth-century architect and proponent of modern architecture designed Rockefeller Center Music Hall along with hundreds of other well-known buildings locally and across the globe. Projects include the Gallery of Modern Art in New York City, J.F. Kennedy Center for the Performing Arts in Washington, D.C., Stanford University Medical Center in Palo Alto, California, and National Geographic Society Headquarters in Washington, D.C.

Evergreen is the final resting place for Bantamweight boxer Thomas B. “Trigger” Holt (1900-1941) and two major league baseball players Roy Wood (1892-1974) who played for the Pittsburgh Pirates, Cleveland Naps, and Cleveland Indians, and Sid Benton (1894-1977) who played one game for the St. Louis Cardinals.

Roberta Fulbright (1874-1953), mother of J. William Fulbright, was a force in her own right. After her husband’s death, she became the owner of the Fayetteville Daily Democrat, forerunner to the NWA Times. Fulbright used her position to advocate for women’s rights and civic affairs.

Tips for making the most of a cemetery visit:

Go when you have time to wander.
Wear walking shoes and a hat.
Take bug spray, sunscreen, and a bottle of water.
Spend time sitting on a bench, looking and listening. Wildlife is often abundant in a cemetery, and nature thrives.
Take a camera. Early morning or just before sunset is a great time for capturing the mood.
Take a journal for writing and note-taking.
Study the symbols on the tombstones. The carvings tell a story.
Do your homework beforehand. (Many cemeteries have websites, historic societies, walking maps, to help you get the most from your visit. Some cemeteries have specific rules regarding taking stone rubbings.)
Feel the solitude of the place.
Consider donating to your local cemetery for upkeep. Or become a volunteer!

The symbols on a tombstone help to tell the story of the deceased and are considered part of the artwork of a graveyard. A few of the symbols you may notice when visiting a historic cemetery are:

Stones shaped like a tree stump often signify the deceased was a member of The Woodsmen of the World. Lamb statues symbolize the death of an infant or young child.

Whether a small family cemetery hidden away in a cotton field or a sizable National cemetery with markers in a straight row, cemeteries provide one of the last best places for private reflection. Do you have a favorite cemetery in Arkansas?