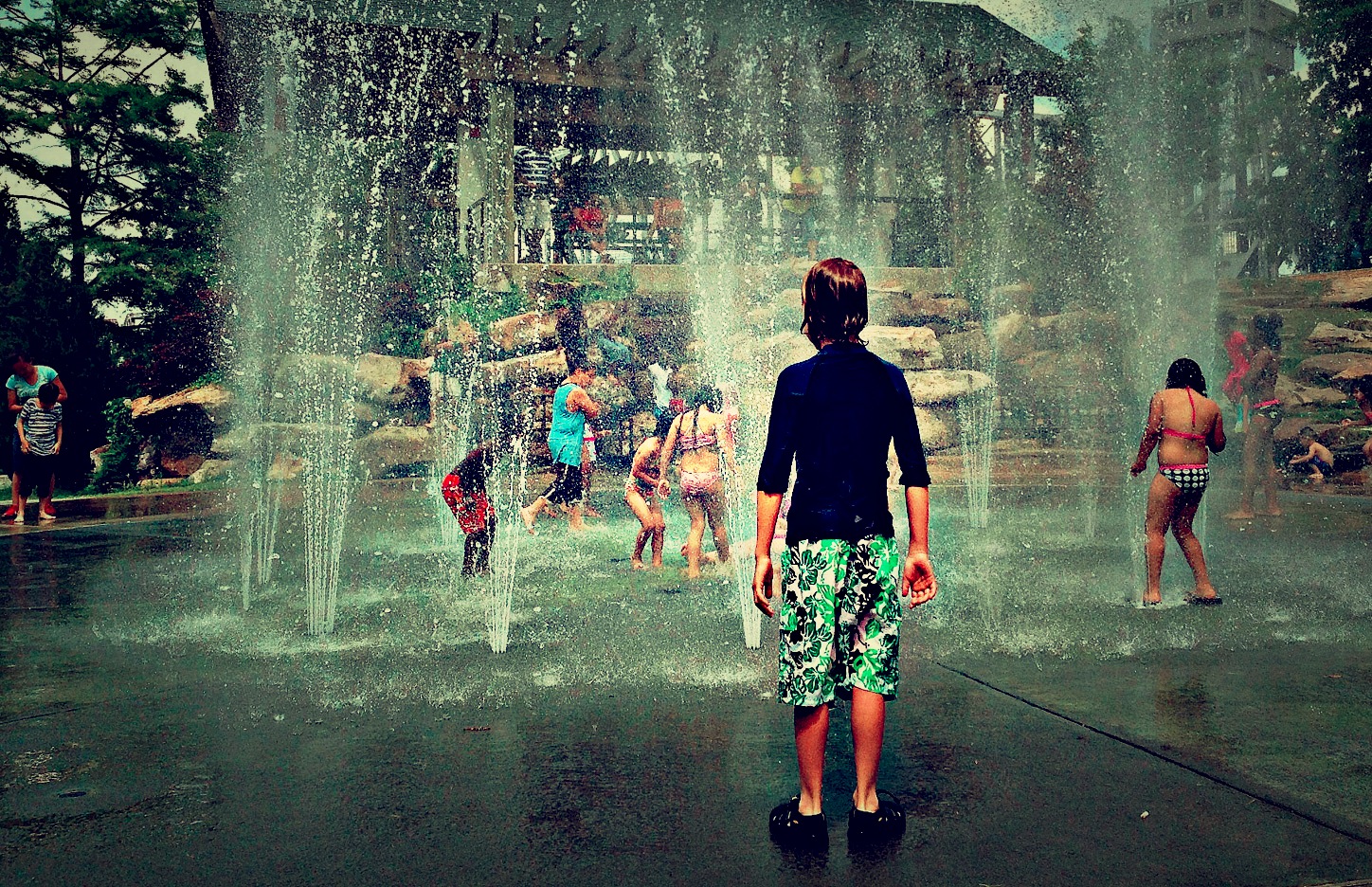 The park sprawls over 33 acres along the south bank of the Arkansas River in downtown Little Rock, and its paved trail forms part of the seventeen-miles-and-counting Arkansas River Trail. It’s perfect for strolling with kids, with plenty of interesting features to explore, and scenic places to stop and rest.

One of our must-see stops is the Witt Stephens Jr. Central Arkansas Nature Center, which anchors the park at its eastern end, where it meets with the Clinton Presidential Park. The center is operated by the Arkansas Game and Fish Commission, and is a great place for kids to learn about wildlife in the Natural State. The big draws for my boys are the baby alligator tank and the extensive freshwater aquarium that lets them get a close-up view of slothful catfish and eerie-looking gar, among other native fish. They also get a great lesson in conversation from the excellent historic exhibits. Insider tip: the Nature Center has the cleanest and most kid-friendly restrooms in the park, in this mom’s opinion.

Stepping outside, we pick up the park trail through a pretty stretch planted with native species, and dotted with bird feeding stations, before emerging into the River Market complex. Depending on the season, we can sample fresh watermelon, pet baby goats, inspect souvenirs, or go into Ottenheimer Hall for a hot lunch or cold treat. In the wintertime, there’s ice-skating. You can also rent bicycles here for all ages and skill levels, and join a guided cycle tour, or explore the river trail on your own.

Leaving Ottenheimer Hall through the riverfront side, we leave the market, and look out onto the covered amphitheater. During Riverfest, the amphitheater serves as the main stage for headlining acts, but it hosts all kinds of events throughout the year, including the July Fourth Pops on the River event with the Arkansas Symphony, and a Movies in the Park series during the summer.

Turning west, and winding nearer to the river, the trail takes us toward the History Pavilion, where you can read about the history of the area and see the “Indian Head” statue carved by Peter Toth in 1975, one of many sculptures in the park. Here is where we come to the proverbial fork in the road. On the right is the entrance to Junction Bridge, a pedestrian/cyclist bridge spanning the river. On the left is Peabody Park, a unique urban play area.

If we had all day, and had eaten a good lunch at the market, we might stroll across Junction Bridge and catch the trolley back from North Little Rock’s Argenta district. If our time and energy were winding down, we’d go directly to Peabody Park for refreshing romp through the splash pad, and then let everyone dry off while clambering around the play area.

My boys love this unique adventure playground, as well they should, since my older sons were consulted at an event held for kids during its planning phase. My oldest, five or six years old at the time, sketched out his concept for underground tunnels, and explained them to a very attentive city director. We don’t know if he was the only child that day to propose the idea, but we feel a special sense of pride when we come to the tunnel area (and a touch of guilt–parents of busy toddlers and pre-schoolers, get ready for an exhausting game of whack-a-mole).

By this time, we are generally ready to call it a day, but those with more stamina (or the foresight to pack snacks and water) might want to check out the Sunken Plaza at the park’s western edge, where there are picnic and checkerboard tables. Wherever you begin the return trek, do remember to stop by the “La Petit Roche” Plaza, near Junction Bridge. There you can see the remnant of the landmark by which French explorers identified a spot on the river that was a good place to stop–the little rock.

And I would have to say they were right.

A little about Kyran Pittman.

Arkansas Women Blogger member Kyran Pittman has been chronicling her "big, little life" online and in print since 2006. Along the way, she became a contributing editor to Good Housekeeping magazine, where her work frequently appears; and the author of a memoir, "Planting Dandelions: Field Notes from a Semi-Domesticated Life," published in 2010 to critical acclaim (including a 4/4 star review in People magazine). A Canadian ex-pat, she lives in Little Rock, Arkansas with her husband and three sons, where she continues to tell her "story of us" at PlantingDandelions.com, a Babble Top 100 Mom Blog.

In the blur of those swift passing years, some memorable moments stand...

How about the Museum of Native American History? Never heard of it? I...

According to Rachel Silva, an historian with the Arkansas History...