Fine Dining at Atlas The Restaurant 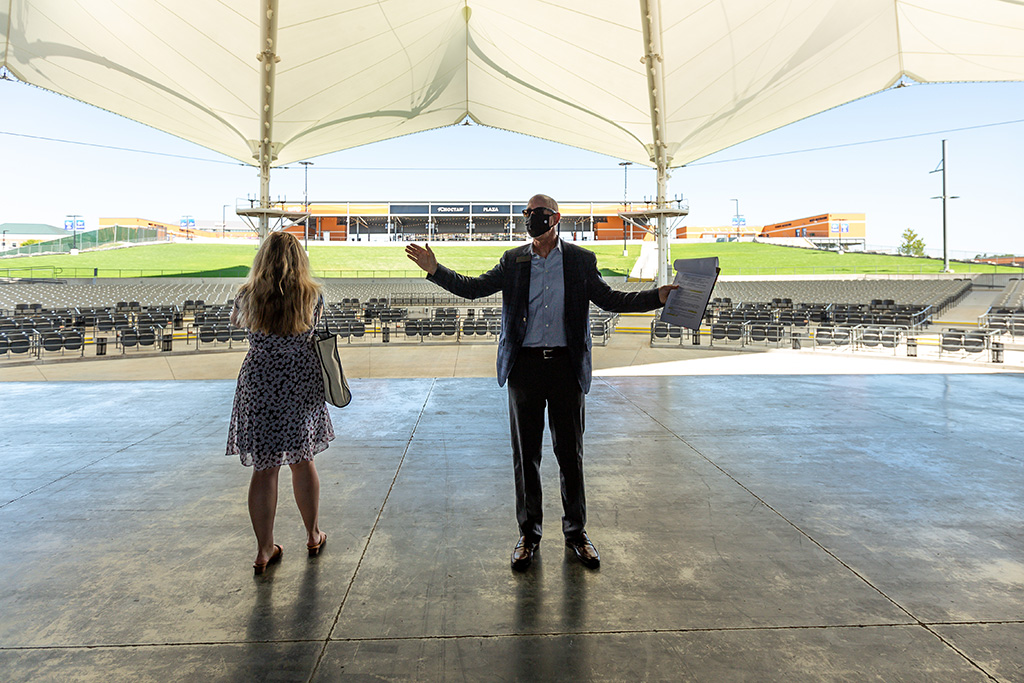 When large-scale concerts are safe again, marquee touring acts will have a new and improved place to play in Northwest Arkansas.

Construction crews at the Walmart AMP have spent the atypically quiet summer putting the finishing touches on a renovation of the amphitheater in Rogers, which opened in 2014. The $17.2 million renovation project was announced in November 2018 – then with a price tag of $13.9 million – with expected completion before the 2020 concert season.

But that timeline was set prior to the COVID-19 pandemic, which has canceled or postponed every concert scheduled for the 2020 concert season. Construction work continued, however, and on Thursday morning, AMP officials showed off the new AMP to a small crowd of mask-wearing media members and other invited guests. Construction work was completed on the original seven-month timeline, said Peter Lane, CEO of the Walton Arts Center and Walmart AMP.

“This is not how we envisioned unveiling our expanded facility,” Lane told the assembled media and corporate guests on Thursday. But with work complete, and new sponsors on board, it felt like the right time for the debut. A larger celebration will take place when it is safe to do so, Lane said.

New to the facility are a larger box office and an expanded entry pavilion. The entire section beyond the grass-covered lawn area has been reconfigured with the idea of enhancing patron experience at the venue. Two restrooms with more than 60 stalls were added, as were additional concession stands, all in the name of cutting down wait times. When patrons are waiting for a drink or to use the restroom, a video system will broadcast the on-stage proceedings on 19 dedicated displays placed throughout the venue.

The most prominent feature of the new area is the Choctaw Plaza, named after corporate sponsor Choctaw Casino and Resort. The covered plaza is centered above and behind the lawn. The more-than-12,000-square-foot plaza features viewing areas and an 80-foot-long bar. For some events, the area will be an expansion of the lawn area with open seating. For other events, the area can be cordoned off into public and private areas.

“Everything is designed to be multipurpose,” Lane said.

The plaza area brings the venue’s capacity to about 11,000, up from about 10,000. The lawn area and up-front seating areas have not changed, although the lawn area did receive new turf in the remodeling process.

Out of public view are a series of improvements designed with the performers in mind.