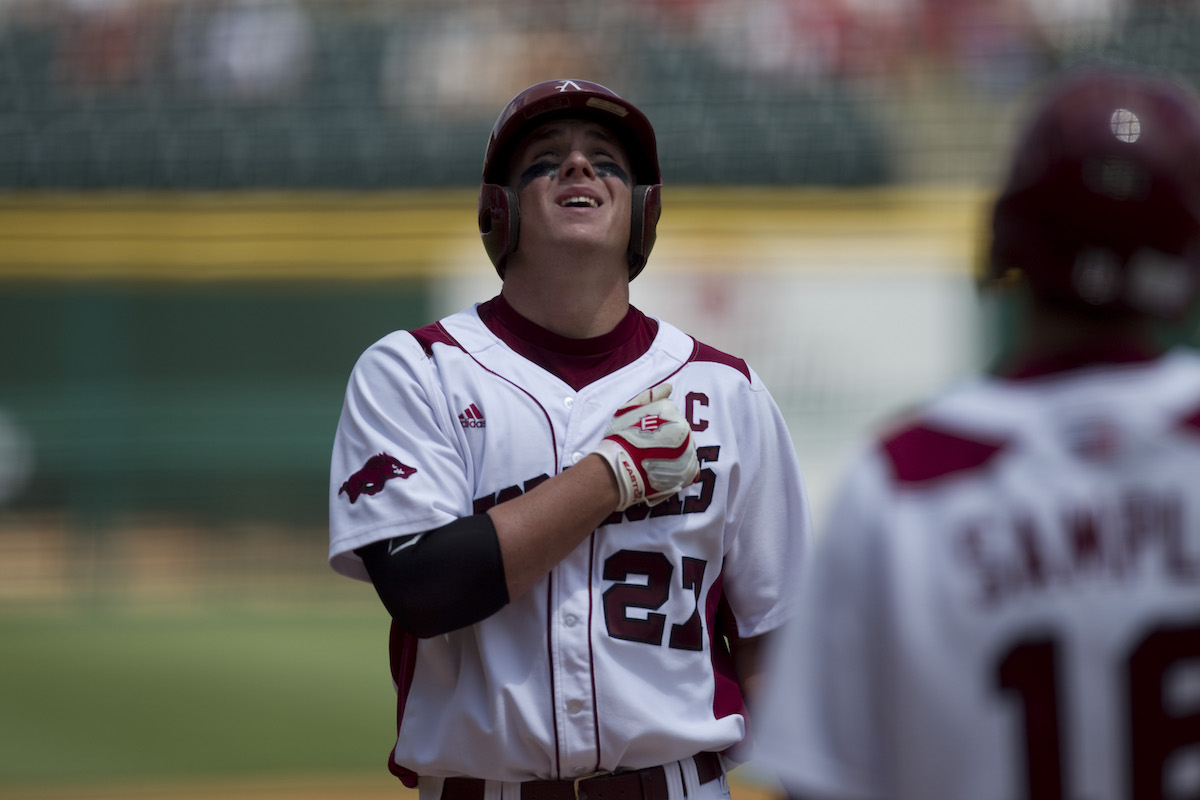 James McCann is used to defying the odds.

The journey began in utero, 13 weeks into McCann’s life.

The doctors told McCann’s mother she had suffered an amniotic tear, and that her child had a 25% chance of surviving. Even then, mental or physical disabilities were likely. Abortion was recommended. His parents, though, decided to see the pregnancy through. “From day one, the doctors said it was impossible,” McCann said in a 2015 interview. “That’s man telling my parents it was impossible. And, obviously, God had other plans.”

Despite those odds, McCann grew up healthy in Santa Barbara, California, developing into a premier high school catcher. He started college in Fayetteville in 2008 and matured even more. McCann credits former Razorback assistant Chris Curry (current head coach of the Little Rock Trojans) with much of his success. “He was like ‘I’m going to make you a man, and I’m going to teach you how to catch at the college level. Then, once I got to that point, he was like, ‘Okay, now it’s time to teach you how to be a professional catcher.’”

But McCann believes his spiritual development off the field was more important.

In interviews, McCann said he deepened his relationship with Jesus Christ during his time as a UA student. In fact, he was scheduled to speak in front of high school students for the Fellowship of Christian Students after what many fans recall as the most memorable moment of his Hogs career. The Hogs were trailing LSU 1-3 at home when, in the ninth inning, McCann hammered a moon shot over the left-field fence. The three-run, walk-off blast sent a then-record crowd of 11,103 people at Baum-Walker Stadium into delirium.

As McCann crossed the home plate, he pointed upward, knowing his testimony to the students would be all the more powerful. “He’s a great example for all of us,” his Arkansas teammate Collin Kuhn said afterward. “It’s the way he plays the game and prepares, too. He’s going to be there every day for extra work in the batting cages.”

James McCann started his pro career in the Detroit Tigers’ organization. By 2014, he’d made it to the big leagues, where he became known for his defense as the Tigers’ starting catcher. But, as the years went on, he changed his hitting technique to emulate a few special teammates. That became a problem. “It was a blessing that I came up with some really good hitters of our generation, and guys like Miguel Cabrera and (Victor) Martinez and J.D. Martinez,” he told the Chicago Tribune.

“They’re special hitters, and if you try and do everything they do, it doesn’t work that way. So it’s also a curse in the sense I saw what Miggy was doing and what (J.D. Martinez) was doing, and I wanted to do exactly what they were doing.”

In 2018, James McCann hit only .220 with eight home runs in 112 games. Detroit didn’t resign him this past offseason.

The White Sox picked him up as a reserve, and in Chicago McCann has so far enjoyed a career year. The key, McCann says, is “getting back to who I was as a hitter and defining who I wanted to be, and realizing I’m not Miguel Cabrera, I’m not J.D. Martinez, and being content with that.” The results are in the numbers: As of July 2, McCann led all AL catchers who had at least 100 at-bats in the highest batting average (.319) and on-base percentage (.376). He ranked second in slugging percentage (.514).

On top of that, the White Sox were sitting in third in AL Central.

As good as it’s getting for James McCann, he knows what matters most in his life. As proud as he is of the Razorbacks, it’s not the fact that he’s only the sixth Hog to play in an All-Star game. It’s not the number of pennants or rings he gets. It’s the family he finds every time he returns home — his wife, Jessica, and their twin boys Christian and Kane.

The boys are something of a miracle, too. Born premature at 30 weeks, they spent the first seven weeks of their lives in the neonatal intensive care unit of Vanderbilt Children’s Hospital in Nashville. “It wasn’t easy. It wasn’t how you draw things up, by any means,” McCann told The Detroit News in February 2018. “But every time you start to feel sorry for yourself or you start to get run down by the situation, you look around at what other babies are going through in the NICU and what their families are dealing with.”

He feels like fatherhood makes him a better man: “You go home to two little boys that could care less if you’re 0-for-4 or 4-for-4. You see the smiles on their faces and it’s a different perspective on life.”