Danyelle Musselman settling into life as a Razorback 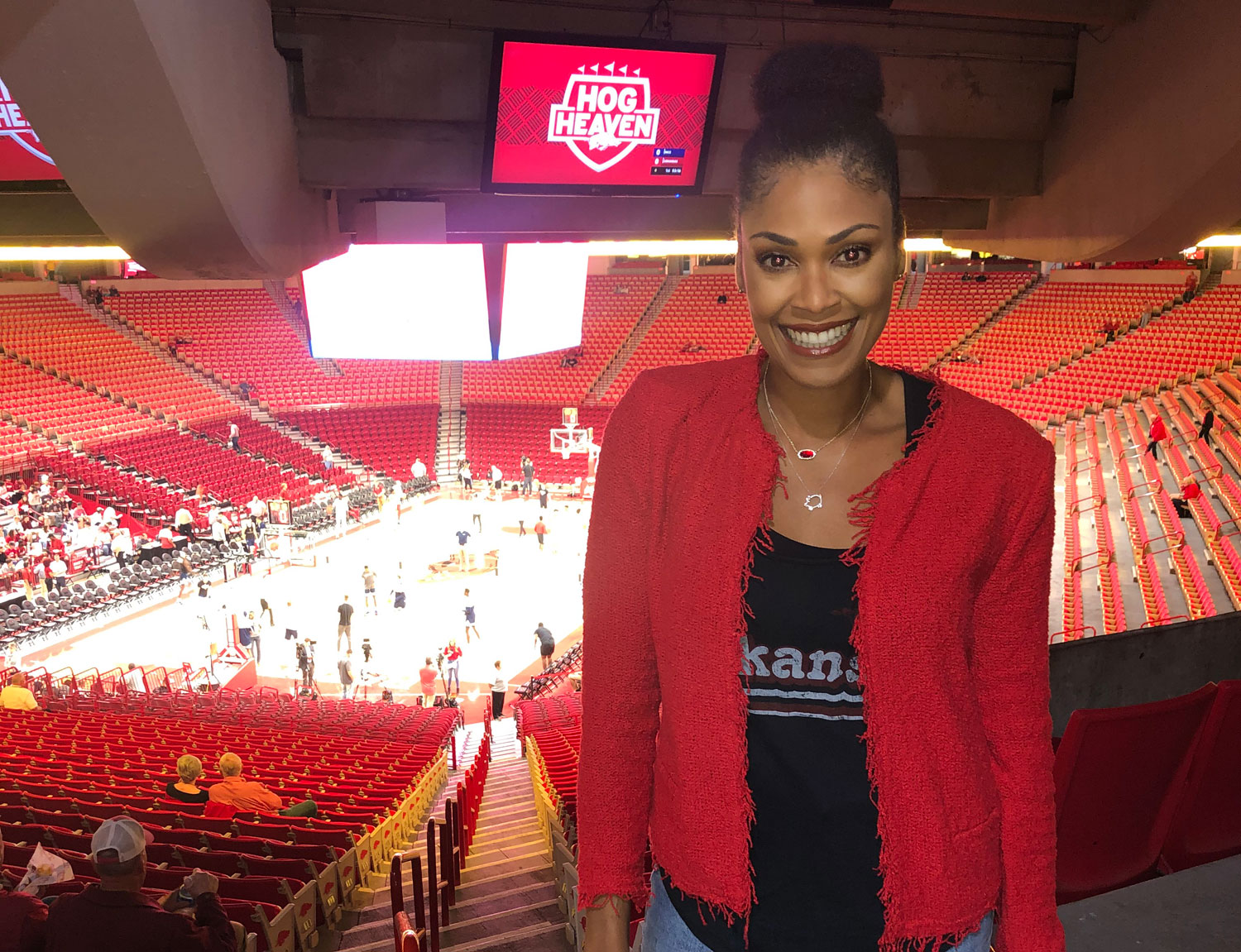 It’s early still, but all indications are that new Arkansas head basketball coach Eric Musselman’s energy, enthusiasm and passion for the game are a hit with Razorback fans.

Musselman has his team rolling early this season in his first year as a head Hog, and his social media savvy, ability to motivate and connect with players and propensity to fire up the crowd at Bud Walton Area have been a breath of fresh air for many Hog fans, and have made him a household name already around the state.

To hear Eric tell it, however, he isn’t the person most likely to be stopped in the street for autographs and attention by Hog fans when he is out and about with his wife, Danyelle.

“She’s a much bigger deal than I am,” Musselman told the crowd at a recent Coaches Kick-Off event held last month at Farrell’s Lounge in Fayetteville. “She’s the one everyone wants to talk to.”

Like her husband, Danyelle is charismatic, charming, with a larger-than-life personality. She has worked as a broadcaster for ESPN, Fox Sports, Yahoo, the NFL Network, and others, and has been a sideline reporter, a television host, and even an actor.

Lately, she’s been focused on settling into her new life as a Razorback.

Her husband Eric was hired in the spring to lead the Hogs after four years as head coach of Nevada. Danyelle said when the initial call came in from Arkansas athletic director Hunter Yurachek, she and Eric were cautiously optimistic but undeniably excited.

“We got a phone call at 6:30 or 7 a.m.,” she said. “We woke up, and I can’t lie, it was the last thing we expected. We were really excited and hopeful, but having been through this process before, you don’t want to count your eggs before they hatch.”

Things have been a bit of a whirlwind since then.

Danyelle said she and Eric got the news that he’d been hired while the two were at the Final Four where she was scheduled to speak at a Coaches vs. Cancer luncheon.

“We couldn’t hurry back home because I still had to attend the luncheon, so it was this secret the two of us had,” she said. “After the luncheon, we got on the first flight back to Reno, and we told our daughter about it.”

The next morning, Yurachek and Jon Fagg came to the Musselman house, and the two were whisked away to Fayetteville.

“It all just happened really quickly,” she said.

After his introductory press conference, Eric hit the ground running as head coach, and the couple lived separately for a while their 10-year-old daughter, Mariah, finished school.

“She was crying and she was so sad to leave her friends, but she said, ‘I’m happy for you, Dad.’ She knew it was a great opportunity,” Danyelle said.

Even though Danyelle said she didn’t know much about Fayetteville before she got to town, she did have several connections to the state. For one, her late father’s family is from Magnolia, Arkansas.

“He was one of 13 kids, and his entire family were huge Razorback fans, so that was really cool for them when Eric took the job,” she said.

Her acquaintances with ties to the state also had plenty of good things to say as well.

“We had a neighbor in Reno that moved to Bentonville, who told us they absolutely love it,” she said. “I had a client that worked for Walmart, and she said, ‘I’m in Fayetteville every six weeks, I’ll tell you everything.’ It was cool because, we are in this little city on the West Coast, and you wouldn’t think there would be any connections, but people couldn’t stop saying good things…And they were right!”

Musselman said she has been impressed with the fan support of the program, and with how welcomed they have been since they arrived in Fayetteville.

“You know, at Nevada, our rival was UNLV so you could not be caught wearing red, so I didn’t have a single red thing,” she said. ” I’m working on that, though.”