Hunter Yurachek on State of the Hogs in 2019 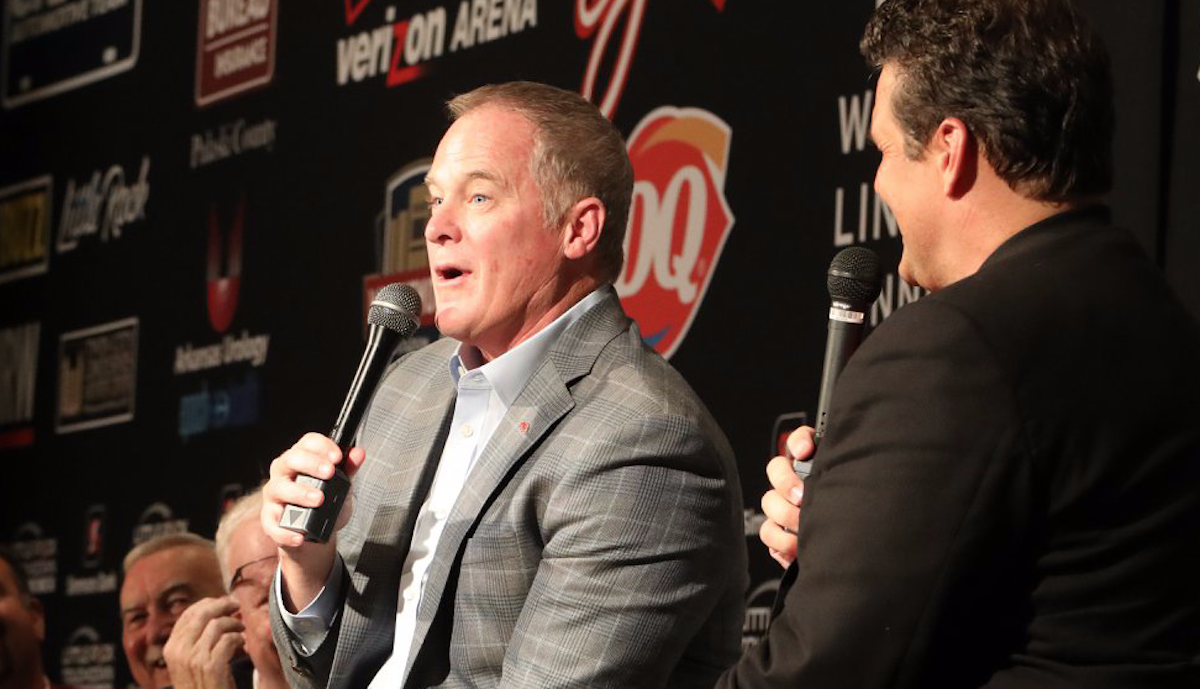 Yes, the Razorbacks are coming off a very tough loss and sure, some of the fans are getting restless, but he is certain that brighter times are ahead.

“One of the things I’ve learned in 27 years, and having been through some highs and lows in 10 years as an athletic director, is the highs are never too high and the lows are never too low,” Yurachek recently said.

To reach those highs, coaches and players must learn from their lows.

Yurachek liked the improvement he saw over the offseason and the first three games of this season heading into the Sept. 21 tussle against San Jose State. Instead of continuing to get better, though, the Hogs struggled in a 31-24 loss. “We took a step backwards. We did not get better. Coach [Chad] Morris will be the first to tell you,” Yurachek said at Monday’s Little Rock Touchdown Club meeting.

Now, the task turns to taking on the Texas A&M Aggies in Arlington, Texas. Yurachek’s confident Arkansas will learn much from the latest loss and put those lessons to good use on Saturday and beyond.

He chatted more about the football program, how his family is adjusting to Arkansas, exciting news about Razorback basketball and other topics during the Sept. 23 lunch.

Below are some excerpts, lightly edited for clarity:

On whether he would have any say regarding who’s on Chad Morris’ staff:

We hired him as a head football coach. He’s got to make the decisions on who his staff is. He’s got to make the decisions on personnel and the X’s and O’s in the game plan. My role is to support Chad Morris. To support [defensive coordinator] John Chavis and [offensive coordinator] Joe Craddock and our staff and those young men that are in that locker room battling each and every day. To make sure that they understand that their director of athletics is with them.

On the design of the upcoming Nolan Richardson Court at Bud Walton Arena:

I’ll use social media from time to time. I’ve turned it off here for the last 24 hours for a few reasons. [laughter] Last week, I asked for fan feedback on what they wanted to see on the design of the Nolan Richardson Court. Anybody want to take a guess at the No. 1 thing I received?

It’s an exciting moment to be able to do that in honor of Nolan, and Coach Richardson’s really excited about it. Coach [Eric] Musselman’s done a great job of engaging Coach. If he’s available, he’s going to come and be an honorary coach in the Red-White game on Oct. 5. He’s still very much a part of our program.

On the football team’s post-win“Club Dub” and the celebratory antics of Eric Musssleman:

These young men, they train all winter long. All summer long. All fall long for 12 opportunities to play their craft. Man, if you win one of those, you’d better celebrate it.

On adjusting to Arkansas after moving here with his family in 2017:

On the remainder of the 2019 football season:

This past Sunday in Fayetteville, the University of Arkansas athletic...

In soccer, Arkansas has always taken a back seat to the big boys (and...