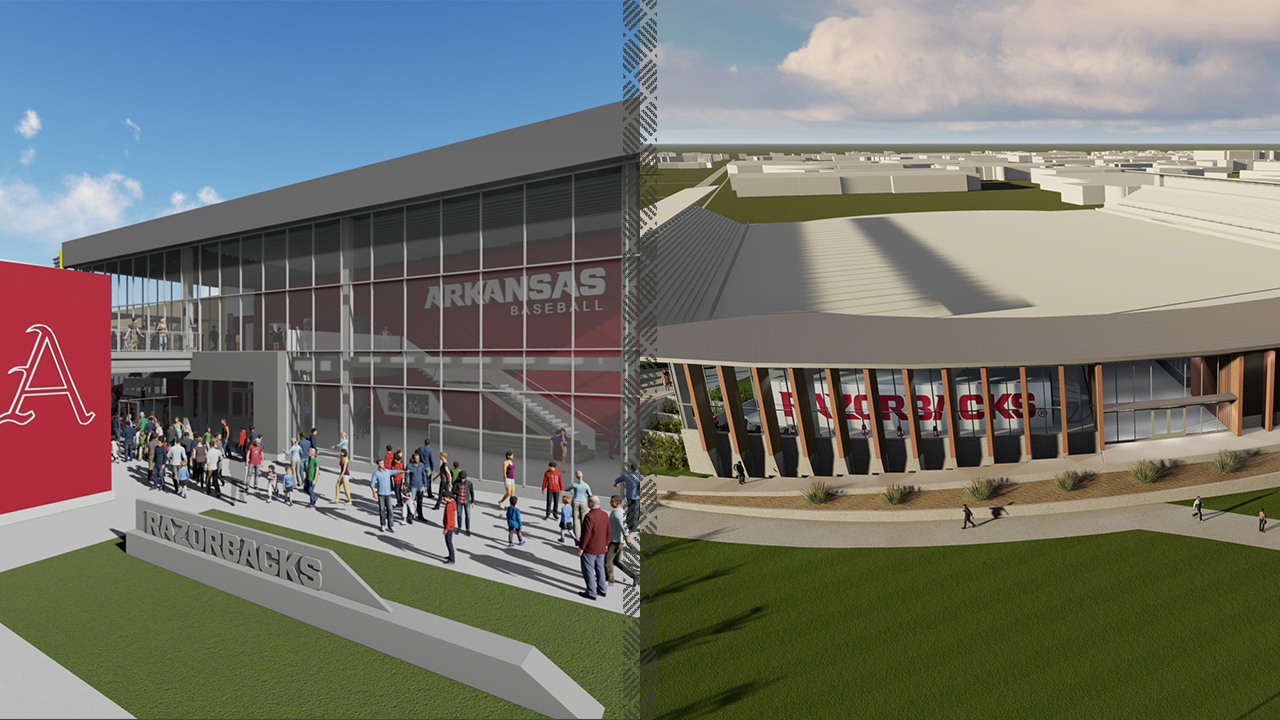 Two of the most successful athletic programs on the UA campus will soon get significant upgrades to their facilities.

UA officials this week announced plans to break ground on a new baseball development center, a new track high-performance center, as well as improvements to the Randal Tyson Track Center.

The new baseball development center will be a roughly 45,000 square foot facility that will include an improved and expanded locker room, a team room, a weight room, training room, meeting rooms, nutrition space, player and pitching development spaces, and in-venue batting cages. It will be constructed in the right field corner of Baum-Walker Stadium and will connect to the west concourse. The new construction will also bring new premium seating to the stadium.

The baseball center was initially approved back in November, but a new tunnel from the development center to the stadium added to the cost, causing the board of trustees to reexamine and re-approve the project this week.

The track and field performance center will be on the south side of the track at John McDonnell Field. The 22,000 square-foot facility will include improved and expanded locker rooms, expanded training room, weight room, team room, and equipment storage space. The facility will serve both the men’s and women’s track and field program. The performance center will cost around $15 million.

In addition, the Randal Tyson Track Center will receive a facelift, along with “event-enhancing” upgrades. Phase one of the improvements calls for the replacement of the track surface, new graphics and AV upgrades, and other building enhancements. The track center is set to be completed prior to the 2021 NCAA Indoor Track and Field Championships, set to be held at the venue. The total cost of the track center improvements is estimated at around $5 million.

“We are looking forward to beginning these facility projects that will benefit the experience of our student-athletes in baseball and track and field,” said Vice Chancellor and Director of Athletics Hunter Yurachek. “While Baum-Walker Stadium, the Randal Tyson Track Center and John McDonnell Field still rank among some of the best competition venues in the nation, many of the spaces used each day by our student-athletes are no longer sufficient to support the needs of these highly successful programs. The new and renovated facilities are important steps and will further enhance the support for our student-athletes as they compete for SEC and NCAA championships.”


Rendering of the new track and field performance center

The UA track and field program is among one of the most storied in any sport in NCAA history, with more than 40 National Championships in cross country, indoor and outdoor track, more than any other program.

The baseball program has also been incredibly successful, with 10 College World Series appearances since 1979, including back-to-back appearances in 2018 and 2019.

The new athletic facilities were designed by WER Architects/Planners (Little Rock, Fayetteville) and HKS Architects (with offices in Dallas, Chicago, New York, Los Angeles, London and Atlanta). Kinco Constructors has been selected as the contractor for the project.

The UA will pay in part for the three projects with a bond issue of up to $31.25 million payable over 15 years, to be paid for by revenue from athletics, gifts, and bond proceeds. According to the ArkansasRazorbacks.com, no university funds, state funds, or student fees will be required to complete the projects.

Construction on the baseball development center is scheduled to begin in either late 2019 or early 2020, with a target completion date set for the spring of 2021.