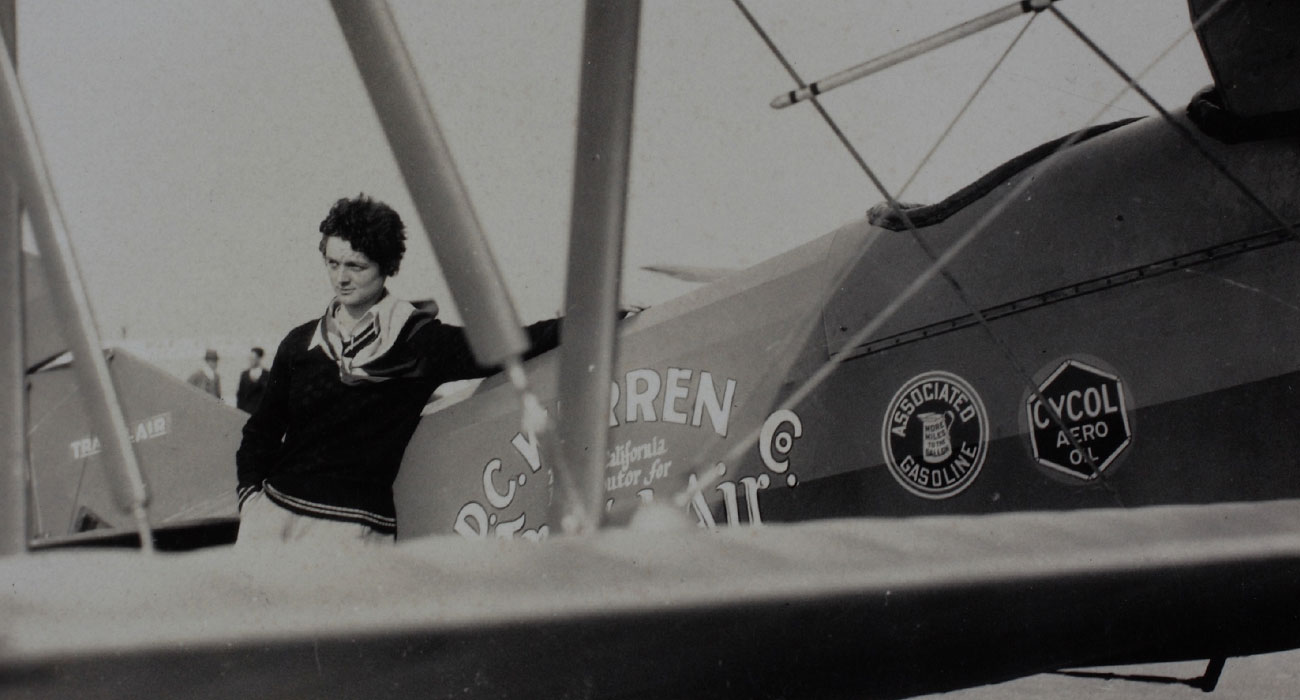 March is Women’s History Month and Arkansas has its share of amazing women who have influenced both our state’s history and the nation – Louise Thaden and Daisy Bates.

If you mention airplanes and women, most people immediately jump to Amelia Earhart as the most famous female pilot in aviation. However, Bentonville’s own Louise McPhetridge Thaden was just as well-known an aviator as Earhart, accomplishing many feats Earhart didn’t.

Louise was born in Bentonville in 1905. She grew up on a farm, attended the University of Arkansas, and started working for a coal company. When she was offered a job by Travel Air Corporation, Louise jumped at the chance and moved to San Francisco, where free pilot lessons were included as a benefit of her employment. She earned her pilot’s license in 1928, number 850, signed by Orville Wright.

For the next 10 years, Louise won a series of races and awards. She set records in women’s altitude, solo endurance and speed. She won the Women’s Air Derby, a transcontinental race, in 1929, beating out 19 other women, including Amelia Earhart.

Women were barred from air races for the next six years. But in 1936, Louise teamed up with fellow female pilot Blanche Noyes to compete for the Bendix Trophy, one of several cross-country air races popular at the time. Thaden and Noyes won, beating many male pilots.

Throughout her aviation career and her lifetime, Louise wrote articles on aviation. She published an autobiography shortly after she officially retired from racing in 1938. The book, High, Wide and Frightened, is available from the University of Arkansas Press.

Louise supported women in aviation by serving as treasurer and vice president of the Ninety-Nine, an organization for women in aviation. She also served as the National Secretary of the National Aeronautics Association. Before her death in 1979, she saw the Bentonville Airport renamed Louise Thaden Field. She was inducted into the Arkansas Aviation Hall of Fame in 1980. The Arkansas Air and Military museum in Fayetteville maintains an exhibit dedicated to Louise Thaden’s amazing accomplishments.

The civil rights movement and the desegregation of schools had a huge impact on Arkansas, and Daisy Bates was the woman in the middle of a time of upheaval and uncertainty.

Born Daisy Gatson in 1914, Daisy battled adversity early in life. Her mother was murdered and her father soon left Daisy in the care of family friends. She married L. C. Bates in 1941 and her career as a civil rights leader began. The Bateses created the newspaper, the Arkansas State Press, that same year. They devoted their weekly paper to civil rights around Arkansas, especially Little Rock. Each Thursday, the paper featured black Arkansans around the state. The State Press became the largest African-American paper in Arkansas, distributing copies to Hot Springs, Pine Bluff, Texarkana, Jonesboro, Helena, Forrest City and throughout Little Rock.

The desegregation of schools became the catapult to launch Daisy Bates into the national spotlight. With the Brown v. Board of Education decision to end segregation in schools across the United States, the State Press called for an immediate end to desegregation in Little Rock. Both Bates and her husband were active in the NAACP. She became president of the Arkansas Conference of Branches in 1952. When the first nine African-American students enrolled at Little Rock Central High School in 1957, Daisy was their leader, mentor and spokesperson.

The nine students met at her house before and after school. Bates advised the students at these meetings and continued to advocate for civil rights, especially in education. The home received police protection, but the Bateses didn’t escape threats and violence as rocks, and sometimes bullets, came through the windows and crosses were burned at the site twice.

In 1960, after the tumultuous events of desegregation, Daisy Bates moved to New York and wrote a memoir, The Long Shadow of Little Rock. She served in Lyndon Johnson’s administration as well, focusing on poverty, before moving back to Arkansas in 1968. Despite suffering a stroke, she continued to persevere for the rights of African-Americans in Arkansas. Her memoir was republished and in 1988 it won an American Book Award.

The effects of Daisy Bates’ life can be seen around Little Rock and Arkansas today, from a street and elementary school named after her, to the legacy she left behind in the battle for the integration of Arkansas schools.

You can find Daisy Bates’ memoir from the University of Arkansas Press. Her house in Little Rock is now a National Historic Landmark.

Both Daisy Bates and Louise Thaden were pioneers in the state and we celebrate them as women in Arkansas history.

All other photos in the public domain.