Count the Railcars – Railroads in Arkansas 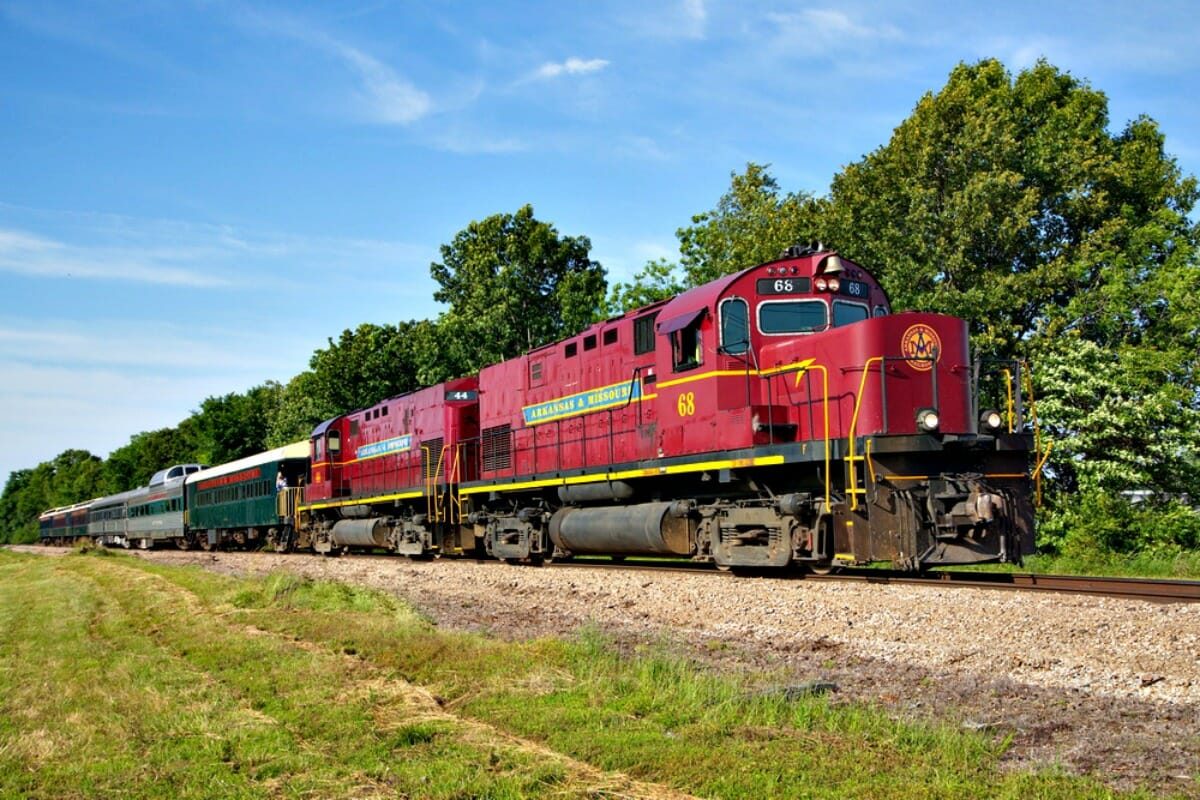 My grandparents lived only a few blocks from the railroad tracks. While my cousins and I played in the yard, the long, low whistle of a train would often cut through our game. My grandfather would appear almost immediately. “You hear that train?” he’d ask. “Let’s go count the cars.” We’d troop down the hill to the tracks, a gaggle of kids, Grandpa herding us with a cigarette between two fingers. We held our hands over our ears as the train cars clicked past. Grandpa never covered his ears. He always waited until the last railcar rolled by, look at us and say, “That was some train.”

The first railroad company in Arkansas was formed in 1852, though plans had been in the works to bring the railroad to Arkansas since statehood. However, railroad companies were expensive to create and operate. The first track wasn’t laid until 1858, from West Memphis to Madison, in what would become the Memphis and Little Rock Railroad. Soon after, the Civil War broke out and put a stop to railroad building.

After the end of the war, in 1866, renewed interest in the railroad spurred former Confederate general Nathan Bedford Forrest, along with C.C. McCreanor, to complete the Memphis and Little Rock line. Railroad building in Arkansas gained steam. In 1869, the Little Rock and Fort Smith Railroad Company began building a facility in Argenta, on the north side of the Arkansas River in Little Rock. By 1871, 86 different companies held charters to lay track for new lines, but in reality, only 271 miles of track existed in the state. Problems continued to plague these new companies, from worker strikes to the collapse of financial backing.

Despite the difficulties, two companies, the Little Rock and Fort Smith, and the Cairo and Fulton managed to complete their lines by 1874, bringing rail travel to new heights in the state. Their lines connected Little Rock to Missouri and also to Ft. Smith, where freight could be loaded onto steamer ships. This opened the state up to commerce like never before, transporting lumber, mining products and other goods, as well as people. A railroad meant news from other places, faster mail delivery, economic prosperity and greater ease of movement.

Railroads weren’t without danger and laying new track often meant blasting through rock, negotiating around the steepness of the Ozarks and Ouachitas, and dealing with the oppressive heat and mosquitoes found in the Delta region. Still, building persisted. By the time Arkansas reached the turn of the century, it boasted 3,360 miles of track across the state. Some of these lines were major thoroughfares, like the St. Louis, Iron Mountain and Southern Railway, which connected St. Louis to Texarkana. This railroad was robbed twice, by the James Younger Gang in 1874 and the Dalton Gang in 1893.

Many shortline railroad lines cropped up in this era to connect towns to major railroad lines. The Dardanelle and Russellville Railroad, which began operating in 1873 and claims five miles of track from the Arkansas River to the Union Pacific Interchange near downtown Russellville, is the oldest, continuously operating line in Arkansas. The shortest line was built in Augusta, Arkansas. After being bypassed by the St. Louis and Iron Mountain Railroad, the town funded their own one mile track to connect to the line.

In the 20th century, railroad track continued to be laid across the state, reaching 4,700 miles of track by 1941. However, the railroad era was already fading. Train accidents could easily put a line out of business. The increased use of the automobile began to cut into railroad traffic. When the Federal Aid Highway Act was created in 1956, it spelled the end of many railroad lines as travel by car became easier than ever, and airlines gained an increasing share of passengers and commerce as well.

By the time my grandfather walked me down to count train cars, passenger trains in Arkansas were a thing of the past, with the exception of Amtrak. The Union Pacific Railroad acquired many of the lines still in existence across the state and now runs 1,325 miles of track, carrying freight through the state. The UP still maintains the maintenance facility built in North Little Rock so many years ago.

Arkansas has 25 railroad companies currently operating in the state. Though the heyday of Arkansas railroads is gone, those whistles can still be heard across the state as trains traverse the current 2,730 miles of track. The next time a train catches you at a railroad crossing, you can remember the many hours of toil and expense that opened railroading in Arkansas. Don’t forget to count the railcars, too.

As my grandfather would say, “That’s some train.”

Want to learn more about the history of railroads in Arkansas?

Visit the Arkansas Railroad Museum in Pine Bluff for an extensive history of railroading across the state. The museum had many train cars on display, as well as Engine 819, a steam engine built in Pine Bluff in 1942.

Many former train depots in Arkansas have been converted into museums as well. Check to see if one is located near you.

You can still ride the rails in Arkansas. The A&M Railroad operates a scenic excursion train Springdale to Winslow and Van Buren with many specials throughout the year. Check out their website for upcoming events and to purchase your train ticket.

Amtrak runs the only true passenger train in Arkansas. The Texas Eagle passes through Walnut Ridge, Little Rock, Malvern, Arkadelphia and Texarkana on its route from Chicago to Dallas.

Photos courtesy of the Arkansas Railroad Museum in Pine Bluff and the A&M Railroad in Springdale and used with permission.

3 responses to “Count the Railcars – Railroads in Arkansas”