Enormous Delight in a Tiny Library 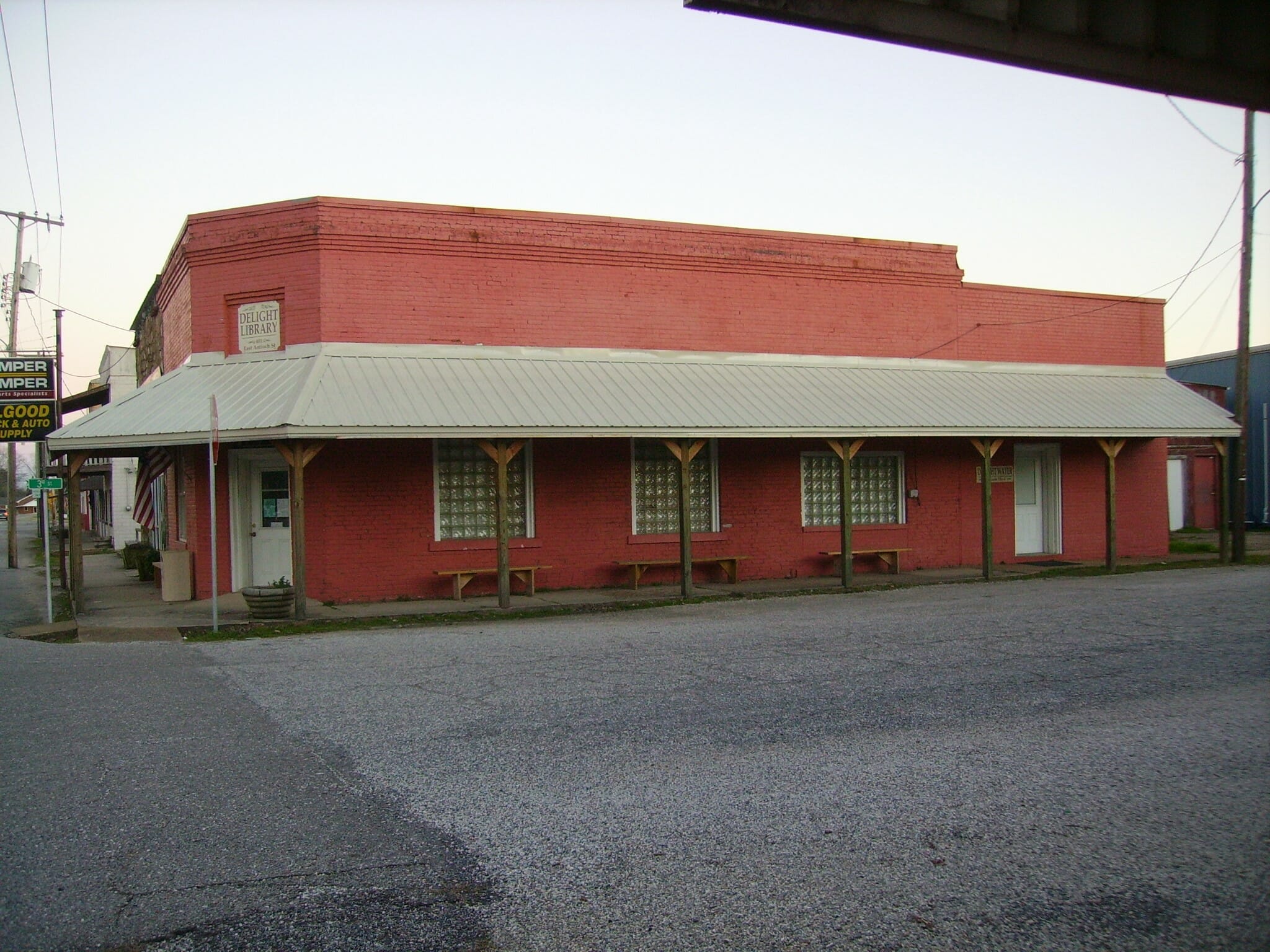 What could bring several officials from Arkansas Educational Television Network (AETN), The Salvation Army and the Arkansas State Library 100 miles to the small town of Delight in the southwest quadrant of Arkansas?

Could it be a 500-square-foot library, composed largely of used book donations, in a well-worn building?

Is it the generous town and its penchant for reaching out?

Or could it be the heart and soul of a spunky 70-something librarian?

My bets are on the town and its librarian.

Virginia Evans (Miss Ginny, to us) comes to the Deep South from New York. Her origins are so far removed from our town of Delight, both geographically and culturally, it was like she landed in a whole different world.

But she didn’t let that stop her—not Miss Ginny!

Probably the most telling day, as far as cultural difference is concerned, was when a downed limb interrupted electrical service for two whole days.

“In New York, a problem like this would have shut down the whole city. Here, everyone is out and about—I’ve had more library visitors today than I’ve had in a long time. And, of course, you know our computers are down without electricity, so it’s not even about Internet; the people just want to be here!” There’s awe in her voice.

The sparkle in her eyes tells you she’s glad; she’s enjoying the experience and challenge of keeping school children entertained, educated and warm, as they drift in and out, unexpected school closure, lacking a source of electric sociability, coming to see what she has up her sleeve. Somehow she’s coaxed from the shops around her a source of hot water—which was all she needed to run a library without electricity, but with hot cocoa—and she’s set up tables with a jigsaw puzzle and some coloring pages. The children are enchanted.

“We can see okay in here with the curtains open,” she says, “and I cannot believe the resourcefulness and ingenuity of folks around here!”

So life in Delight is a well-oiled machine, sometimes. And the fuel is old-fashioned give-and-take, deep American roots, “the howdy and the hand-shake, the air of feeling free”[1] you expect in a small town in the Deep South.

It was a long trek for Miss Ginny, through three states, one hurricane, a coma, loss of one college degree, loss of a house, a second degree, a stroke, a torn rotator, eye surgery, and more than one injured finger.

The people of Delight are a bundle of resources that needed, not a leader—we already have a kind and wise mayor—but a muse. For us, it was love at first sight. We cannot help it; Miss Ginny is lovely.

How the library came to be.

It all began in the 1950’s, when a young widow donated her entire personal library and housed it on one wall of her office in William’s Furniture Store.

From the deep well of her kindness and industry, the citizens of Delight drew up the waters of literacy to grow the flowers of their intellect and the shade trees of their wisdom. Many lovingly remember old Mrs. Odell Hughes, celebrated statewide as “Arkansas’ Oldest Living Librarian.” Her legacy remains, to this day, though the idea of a library—and all the books—have changed hands and homes more than once.

The Delight Branch Library, in a more recent time, found shelter inside a propane business managed by lovely people who kindly rented part of their storefront and some office space. Few children had permission to hang out at that library, behind which the propane is stored and where business is being conducted. It is an excellent propane service. It was not, however, the best place for children, nor for books.

Suddenly everything changed. Donators donated, grants were granted, new faces volunteered. One day it was like a close-quarters halftime marching contest, with log trucks yielding to book trucks—groaning full, rolling south and clattering empty, returning—as the old library moved itself across the highway, becoming the new library, and housed itself inside a retired bank building.

We appreciate the fact that bank buildings are always works of art. Antique bank buildings are more: They are telling historical sites. Our “new” library still has the original glass block windows and even antique stained glass windows, thick walls and “the vault,” another antique.

If you’re ever in Delight during the week, and a bad storm should happen to blow in, don’t worry; Miss Ginny will already have the vault cleared out; you’ll be welcome to join us in there for a cup of coffee and miscellaneous reminiscing about “the last one…”.

You really should try, though, to peek inside during our Summer Reading Program. You never know what a certain ingenious mind will have cooked up in the excitement of inviting around 50 children to get acquainted with the joys of books, learning and libraries.

For instance, have you ever seen Santa arrive in a fire truck in the middle of summer? Miss Ginny can make it happen. How about 20 tikes jumping around like jumping beans with noisy percussion instruments? Or a fun, teen scavenger hunt divided into three teams with three of the local pastors taking the helms? (Can we say “competitive”!) Who wouldn’t want to experience taking apart computers to see what makes them go, visiting with firefighters and other heroes, creating beautiful etched glass masterpieces, and so much more? All are totally within Miss Ginny’s abilities.

Seriously, teen boys have shed tears at having to miss our Summer Reading Program due to sports practice.

And there’s the nighttime, the time off, the time most people rest.

Yes, Delight Branch Library’s famed book signings, you can be sure, are far more than just a table with books, and an author with a pen. Weeks of advertising, days of gathering décor from the townsfolk, baking, stirring up punch, planning, ordering, scheming—all go into these events. When the great night arrives, sometimes we cannot even keep up with sales. So many of us have helped; we all have a vested interest and we surely want to try out that book.

Occasionally, our library events are too large for us and we borrow the school auditorium. Recently, a 20-author book signing happened outdoors at our annual Music Fest. That one included a huge charity drive for a Domestic Violence shelter. Hard work, yes, but the good is worth it. One time we had a sock-hop fundraiser with a live DJ. Again, not in the library building.

There are more “parties” than that, though. Many learning events happen at night, such as basic computer, PowerPoint, poetry writing, Facebook startup, photography, crafts and so many other how-to’s, complete with soup and homemade bread, or perhaps cake or cookies. A local Extension group meets in the library, as does our Town Council. We’ve entertained professional musicians presenting a large collection of beautiful antique violins (well, we might have called them “fiddles”) and the loveliest duets you could imagine, as if they were right in your living room.

But the piece de resistance?

It has to be the Mr. Rogers’ Neighborhood Sweater Drive, the combined brilliant idea of the Salvation Army and AETN to include the Arkansas State Libraries. Miss Ginny planned and announced it, gathered a few donations for the drawings, and started constructing boxes and printing fliers. Her “neighborhood” (which always includes nearby libraries, and on some days, she extends to Garland County) did much of the rest. In the end, our little library gathered over 1100 sweaters from those in and surrounding our small town of fewer than 300 people.

We all celebrated, again at the local school gym, with music, donated prize awards, official visitors from far away and much larger locales, and helpers dressed as characters from Mr. Rogers’ famous television show.

Just a small town, having fun, being funny—and helping others less fortunate than we . . . .

And now, oh, now! A recently installed acquisition will be the cherry on top. No more lugging large screens in and out the door! Our new SMART Board will be so helpful for anyone who needs it. And although, as always, the community has stepped up to help make it happen, it is, as always, due to the dream of our librarian that we have one.

How difficult to believe all that has come from its long-ago, humble beginnings on a wall in a corner of a furniture store! But our library is here, and it is proof of a love affair between a small Arkansas town and its librarian.

Photographs used by permission of Virginia Evans and Brent Alexander.

A little about Katharine Trauger.

Arkansas Women Bloggers member Katharine Trauger is a retired educator and a women's counselor. She has spent 25 years managing a home and school for children who would otherwise have been homeless, and 15 years as contributor and/or columnist for several small professional magazines, with over 60 published articles. She blogs about the rising popularity of “being at home” from a sun room on a wooded hilltop in the Deep South at: Home's Cool!  and The Conquering Mom and tweets at Katharine Trauger (@KathaTrau) . She is currently working on a self-help book entitled: Yes, It Hurts, But . . .

One response to “Enormous Delight in a Tiny Library”