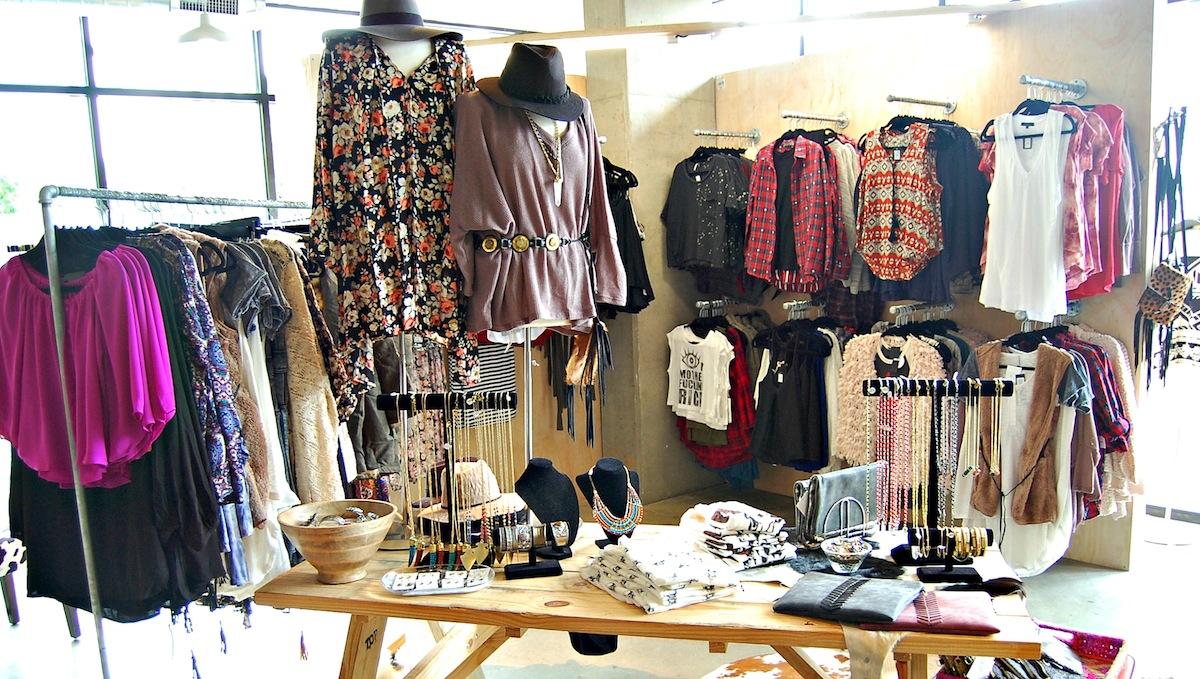 It is a big year for fringe, the 70s throwback trim and the chic boutique that is expanding its way across Arkansas. Fringe, the trim, is on trend this fall for its ability to transition easily from edgy and rock and roll, to country and western, to bohemian and flowy. Not unlike its namesake, Fringe Clothing is not married to just one style. According to co-owner Kendall Sandifer, the growing boutique is “all over the place because I’m so open-minded when it comes to clothes.” When you walk into any of Fringe’s three stores across Arkansas, you can expect to find moto pants next to bell bottoms, crop tops next to oversize comfy sweaters and, if you’re in the Little Rock shop, vintage jewelry next to more current pieces.

The Face of Fringe Clothing

Kendall applies this same laid-back approach to many aspects of the business and her personal style, which by the way, is the very epitome of bohemian. When I met Kendall in her newly opened store in the Sterling Frisco building near the University of Arkansas, she was wearing a flowy, floral tunic dress, a boho wide-brim hat and booties, all of which are available to purchase at Fringe, save the shoes (although, I did overhear her telling a customer that shoes are coming soon). In fact, while chatting with Kendall, “laid-back” was brought up to describe everything from how she interacts with her employees, to the name she chose for her store, even her own wedding that took place six months before she opened her first store.

That’s not to say that Kendall is not deliberate about what she’s doing with her business. When opening her first store in downtown Little Rock’s Arcade Building at the urging of her husband, co-owner Blake Sandifer, she was determined to open in a timely enough manner to sell the clothes she had before the Arkansas weather changed, and her customers had a change of heart. “I told them that if I did not get in that space December 2, that I would sell clothes on the sidewalk.” They were able to open December 2, 2012, making Fringe the first shop to open in the distinctive building.

Even the decision of where to open her next two storefronts was strategically determined. Once sales started pouring in from the Northeast Arkansas town of Jonesboro, Kendall said it just made sense for Fringe to open a store there. So she didn’t even hesitate when an opportunity to partner with a customer in downtown Jonesboro fell into her lap. Fringe became the new face of the former Soho House of Style in March 2015. Then, less than two years after the initial store opening, Fringe expanded again. This time, she chose Fayetteville for many of the same reasons that she had set up shop in Jonesboro. According to Kendall, they were shipping packages to Fayetteville all the time, not to mention, their biggest day in the Little Rock store to date coincided with a Razorback football game that took place in Little Rock. Kendall pushed back her apprehensions about opening a store where the market was so competitive and brought Fringe to the town of her alma mater.

While the focus remains on the new store opening, the online store has been pulled down and will relaunch in the next year. Meanwhile, Fringe is still sending out packages across the state and beyond, and the sales are coming from a somewhat unlikely source: Instagram. Unsurprisingly, Kendall’s approach to the social media platform is part intentional and part, well, laid-back. “Instagram is really, really big for us,” she said. “It’s great for getting people in the store because it’s free advertising, but we sell off of it, too. Girls will see what’s posted, call us and put it on hold or buy it over the phone.” With an average of one picture posted per hour during the day, there is a tremendous potential for customers to see an outfit or an item they just have to have and snap it up. When asked who chooses what is posted, Kendall said, “I’m real laid-back and let the girls put what they want to put on there because everybody sees clothes differently.” She says that often her employees style outfits out of items that she never would have thought to put together herself. Even the store’s signature hashtag, #FringeBabes, was coined by one of her employees. After seeing it, Kendall said she loved it so much that she implemented it across the board to connect with their customers and to promote their brand.

While Kendall is excited about the potential of Instagram, she completely lights up when asked about the physical store. I asked her what she wanted customers to feel when they walk into Fringe Clothing and she didn’t skip a beat before saying, “I want it to be so fun.” She went on to say that she just wants her customers to want to be there, even if they don’t find the perfect item for them. “I want them to want to hang out there. I want you to just like to be in here.”

Her strategy to make the store fun and inviting includes more than just pretty clothes—something there is no shortage of in her stores—but also, a fun, positive staff that her customers will want to be around. “I always tell my girls, positive energy is the prettiest thing about a person.” A trait that Kendall herself exudes. While we chatted about her business, her shop dog Amos, the “Fringe Frenchie,” her artwork, and her penchant for fringe, fur and suede, she did not hesitate to stop and greet each and every customer who walked through the door. Furthermore, she attended to each one of them herself, helping them choose the perfect outfit, showing them a particular item they might love, and sending them out the door with a smile, whether they purchased something or not. The success of her strategy hit home when I found myself wanting to linger a little longer, even after the interview was complete.

If you follow Fringe Clothing on Instagram or Facebook, one thing you will notice is the ongoing collaboration between Fringe and Lela & Lyla Photography. Kendall’s professional relationship with Lela & Lyla co-owners Anja Dewitt and Jessica Barksdale began when she hired them to shoot her wedding. Rather, she talked them into it. At the time, they had not shot a single wedding. Once Fringe opened six months later, Kendall teamed up with the duo to create her first lookbook. According to Kendall, they worked so well together that they could read each other’s minds. The end result of their collaboration is a beautiful collection of photographs that perfectly captures the essence of Fringe, what Kendall describes as “Very Free People, bohemian. Very casual, but cute and comfortable.” When customers began to see the photos in the store and ask about them, Kendall said the idea to team up again to provide senior pictures for local high school students was born. For the girls that signed up, this meant a photo shoot, a gift card to Fringe, a percentage off at Fringe for a month, and styling by either Kendall herself or her manager—the makings of a teenage girl’s dream. For Fringe, this meant advertising for them as the seniors posted on their own social media profiles, sharing what an amazing experience it had been, plus a great way for them to get to know their customers better and build relationships with them.

Those relationships and being in the store interacting with her customers is what Kendall says is her favorite part of all. “I love being in the store. Working with customers, helping them get dressed, and feel better about what they’re wearing.”

When asked if she will continue to expand her brand, Kendall said, “I don’t know if I’ll open another store after this. I’ll do online, but I don’t want it to ever get too big to where I’m not hands-on with all of the stores.”

If you’re thinking that Fringe Clothing is a little to “young” for you, think again. According to Kendall, the versatility of the current trends makes for a wide range of possibilities for women of all ages. “My grandmother shops at Fringe, and my mom shops at Fringe, and so does my 16-year-old cousin.”

Find Fringe Clothing Near You

With three locations across the state, it’s likely that there’s a Fringe Clothing store close to where you live. If you’re looking for bohemian tunics, comfy sweaters, chic accessories, or even a Razorback tee to wear tailgating, I highly recommend you check out Fringe. The hours at the Fayetteville store are 11 a.m.-7 p.m., Monday-Saturday, and 12 p.m.-4 p.m. Sunday. Hours vary from store to store, so be sure to check them out on social media before you head out!

A little about Julianne Thompson.

Arkansas Women Bloggers member Julianne Thompson is a copywriter with a background in fashion, advertising and retail making her home in Northwest Arkansas. After living in 5 different Arkansas towns in the past 8 years (not to mention the 4 states before that), she has (mostly) stopped wondering where she will move to next. She blogs as she finds her bearings in her new community and in the ever changing landscape that is raising a toddler. Though she still loves maxi skirts and wedges, her interests have expanded to include holistic parenting, wholesome cooking, and natural and eco-conscious homemaking. When she is not writing, renovating her new (old) home with her husband, or reading Brown Bear, Brown Bear for the umpteenth time, she enjoys drinking copious amounts of coffee, organizing fundraisers, being crafty and trying to make time for all the hobbies she enjoyed B.T. (before toddler).

One winter day while walking around J.B. Hunt Park in Springdale, I...

Secreted away beneath the waters of Beaver Lake in Northwest Arkansas lie...

Tucked away in uptown Fayetteville is a lush little courtyard; an urban...