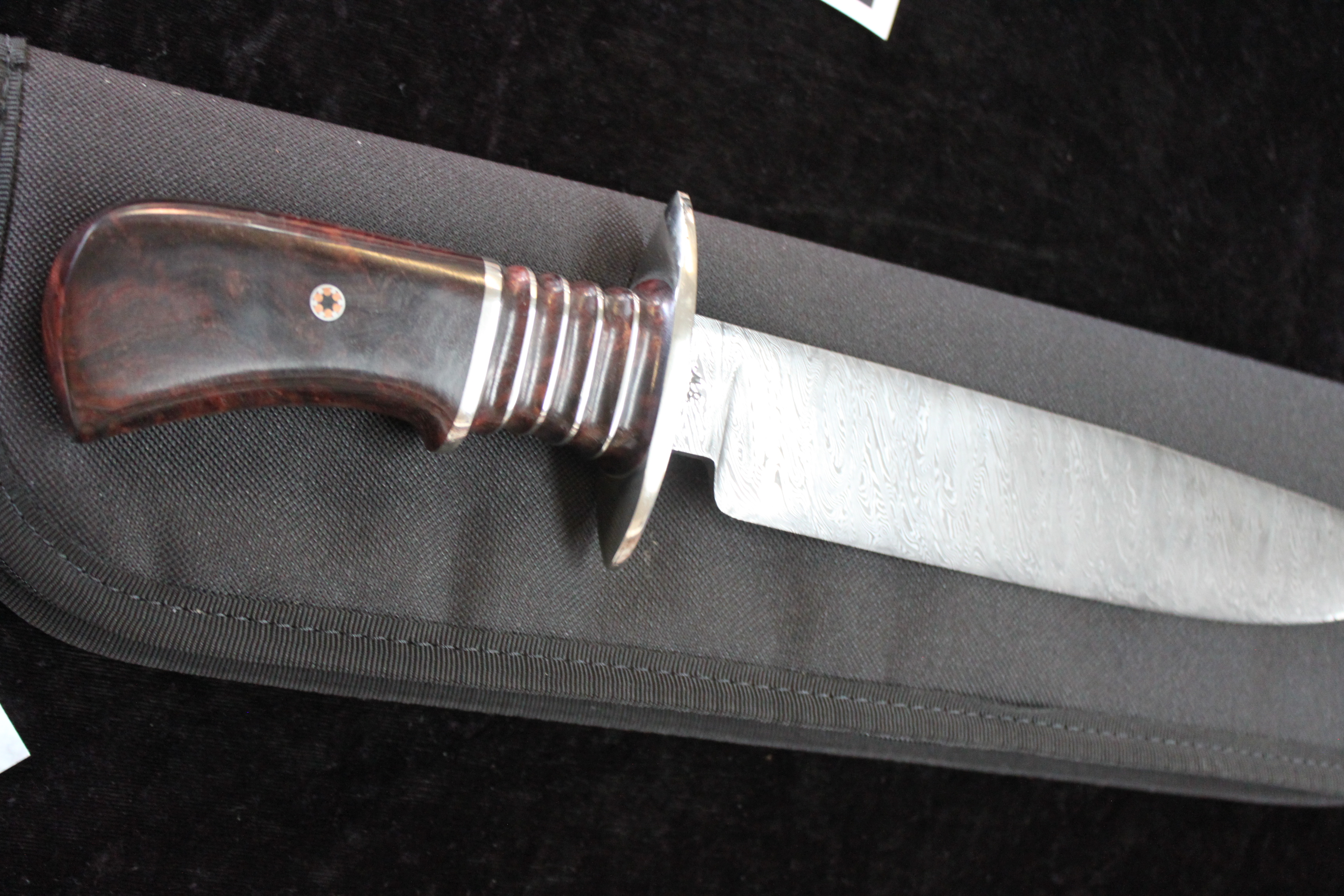 Behind every great knife is the art of bladesmithing and no other place in the world has contributed to that art quite like Arkansas. From the creation of the Bowie knife – crafted by James Black in southwest Arkansas in the 1820s and made famous by pioneer Jim Bowie – to the formation of both the American Bladesmith Society and the Knifemakers’ Guild, Arkansas is the geographical center of knifemaking in America.


And now, De Queen (the heart of Sevier County) is looking to make its mark in their quest to be named the “Knifemaking Capitol of the World.” One of the grounds for this title is a monthly gathering of knifemakers at the Riverside Machine Shop in downtown De Queen. Nearly 20 years ago, five men started gathering once a month to talk about techniques they were learning and show off some of the knives they were making. Today that gathering has grown to 40-50 on a consistent basis and the meeting has an international reputation with global visitors often in attendance.

“Most of us got involved in this as a hobby,” shared “Uncle Al” Lawrence, who owns the shop where the meeting takes place. “I got involved in knifemaking because my dad did it. He would make knives that we used in our kitchen at home. I watched him make them and thought, ‘Hey, I think that’s something I can do.’”

Lawrence made his first knife out of scrap aluminum melted down and poured into a hole he made in the ground. He recently found the knife tucked away in a kitchen drawer after his mom died and keeps it in a shadow box of other pieces he has created over the years. That first knife is almost 52 years old.

Spending any amount of time with this group of knifemakers reveals the community and camaraderie they have formed. They poke fun at each other like a group of brothers or athletes sitting in a locker room. Most of these skilled craftsmen have been friends for close to three decades. They have learned from each other’s techniques and craftsmanship. The challenge to create a unique style sets them apart from others in the field and they have turned their hobby into a respected and widely-known trade.

But how did these craftsmen establish themselves in a quiet town in south Arkansas? The world’s first bladesmithing school was established just an hour away from De Queen in Washington (Historic Washington State Park).  While the school recently moved to Texarkana College, it still draws an international audience and many in the south Arkansas bladesmithing community have added to the curriculum and techniques taught through the school. One special ancient knifemaking technique using the Damascus press (a hydraulic tool used to help form knives) has contributed to setting apart this unique group from other regional knifemakers.

Much of what is established today for knifemaking was done through Arkansas Arts Council grants to re-establish a “dying art form,” both of knifemaking and the Damascus Steel. Damascus Steel describes a technique unique to swords imported from India and Sri Lanka, named for the ancient Syrian city. Original swords of this type date as far back as the third century. Today, all Damascus Steel presses used anywhere are manufactured at the Riverside Machine Shop in De Queen, Arkansas and shipped all over the world.

Knifemaking is an art form that seems somewhat genetic to those involved. The industry is seeing a resurgence of interest in a new generation of leaders. Logan Pearce, of Pearce Knives, is creating new energy in Arkansas knifemaking circles. Pearce heads up the annual Arkansas Knife Show, but he is also leading out across the world helping keep the trades alive. He and his team run a knifemaking school in Iceland, and he recently had the opportunity to complete a commission for former President Jimmy Carter.

Pearce is a third-generation knifemaker; his interest is way more than a hobby. Video games and movies produced by Disney, Warner Brothers, Columbia Pictures, and Bethsade Gaming Studios use his knives as the basis of their design and as actual props in their productions. Pearce is a champion for the industry, currently working on curating a museum and organizing a public art effort in Sevier County.

Like any artist, each knifemaker/bladesmith seeks to set up a unique identifier that sets their works of art apart from the rest. Al Lawrence, JR Cook, Jerry Fisk, Charles Stout are all Master Bladesmiths who have each established a unique handle style, blade design, or use a specific material to make their pieces. They are fully invested in the industry and in teaching what they learn to the next generation of bladesmiths. “It appears that there are more interested knifemakers in the coming generation than there were in the previous,” Cook says. “And that’s exciting to see a trade and industry like knifemaking grow.”

The 31st Annual Arkansas Knife Show will be held at the Statehouse Convention Center in downtown Little Rock on March 20-21, 2020.

We don’t need the stress-delivering information of how many shopping...

Halloween and fall festivities are something each family celebrates...