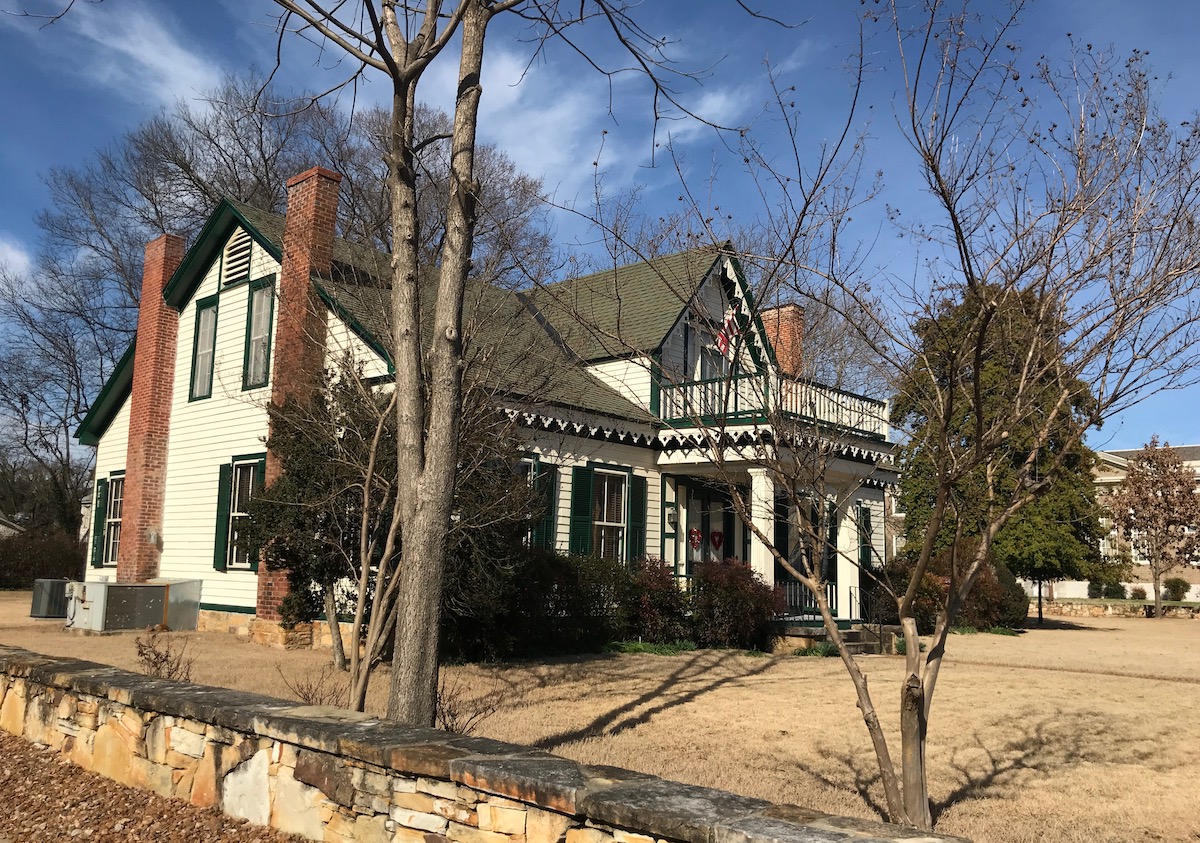 A fire swept through Batesville on April 1, 1920. The flames devastated the downtown area, destroying nearly 30 large houses belonging to wealthy residents and 50 smaller dwellings across Boswell, College and Main Streets. Approximately 300 people, 8% of the population, were left homeless causing a significant blow to the community’s economy. While similar events may have shuttered many other communities, Batesville thrived despite it. Much of the downtown area was rebuilt, and today, a majority of the city’s downtown properties have been listed individually on the National Register of Historic Places or fall within one of the city’s several commercial or residential historic districts.

The first settlers to arrive in the area in 1810 likely had no idea that within twenty years Batesville would become a significant hub for steamboat traffic. The geography of the White River created a natural trading and shipping center on which residents capitalized. Boats traveling either direction were forced to unload at the shoals, thus creating a natural center of commerce that allowed residents to earn their fortunes through means beyond farming. When the railroad arrived in 1883, the city’s reach was multiplied even more.

From its beginning, downtown Batesville has been supportive of education. Batesville Academy, the state’s first learning academy, was established in 1836. Females were allowed to attend beginning in 1856 and Arkansas College (now Lyon College) welcomed its first group of students in 1873.

Commerce and education became a major draw, and wealthy business owners flocked to downtown Batesville. Hotels, mercantile, saloons, banks, law offices and medical practices multiplied. Each new resident seemed to want to outdo the last when building a new home, leading to a timeline of architectural styles, each more magnificent than the last, as one strolls through the downtown streets.

While many historically-significant properties were lost in the 1920 fire, many remain, and thanks to the efforts of community members and the Batesville Preservation Association the city is home to 22 individually-listed historical properties and four historic districts which contain dozens of properties each. Today we will take a closer look at seven of the properties scattered throughout the downtown area.

George Case was a master carpenter, general merchant and a cotton buyer who prospered in Batesville. His original mercantile building still stands on Main Street and is now home to Big’s Restaurant.

Case was also a well-respected builder who built many of the finest homes throughout Batesville in the mid-1800s. Sadly, the only home he built that survived the 1920 fire and the perils of time is the Garrott House, located at 561 E. Main Street.

Built in 1842, the Garrott House is the oldest standing residential structure in the Batesville area and was also the first structure in Batesville to be placed on the National Register. Case built the home for his sister-in-law and her husband, Robert and Eliza Ridgeway Williams, who lived in the home until Robert Williams passed and Eliza moved to California to be with family amid the gold-rush in 1849. The home was eventually passed down to Case’s daughter Eula Maxwell Garrott and remained in the family for many years.

Despite its age, the Garrott house remains in excellent condition. The house has been restored by subsequent owners and continues to be well maintained. The barge board open scrollwork trim is one of the most beautiful and charming features of the home and shows Case’s interest in and attention to detail that made him such a successful builder.

In the late 1800s, urban farmsteading was a widespread phenomenon among wealthy farmer/merchants in the Batesville area. Farm families were beginning to find wealth as businessmen and brought small farming operations closer to the city center so they could continue the family tradition while also prospering as business owners and operators within the city. At least 20 such urban farms existed in Batesville with the Luster Urban Farmstead being the only surviving example.

James Asher Luster was raised a farm boy and partnered with his father, a prosperous farmer himself, in 1874 to operate a large farm on the outskirts of Independence County. Although he continued to work the farm, James eventually moved into town where he owned and operated a store, saloon and hotel. Although the family was wealthy enough to move into the Main Street area along with other notable residents, James Luster chose to build a farmstead in the Charleston area, now known as West Side Batesville.

The house was built in 1885, and the property includes a barn, a smokehouse, a well, a stone wall and a semi-detached maid’s house. The original barn was destroyed by fire in 1940 but was rebuilt “just like it was” by one of Luster’s children from his second marriage.

John T. Warner’s modest home was built on College Street in 1879. The one-story home was remodeled around 1911 to add a half story and make updates and improvements. The last modifications were made to the home by Cora Warner Rich, Captain Warner’s daughter, in the 1920s. The property has remained mostly unchanged since then. The Warner home was added to the NRHP in 1982.

Although the beauty of the house pales in comparison to many of its neighbors, the significance of the home lies with Captain Warner being its owner until his death in 1931. Also successful off the water, Warner was a self-educated lawyer with an interest in politics. He was elected mayor of Batesville in 1895 and was instrumental in bringing electric light and water systems to the city.

Added to the National Register in 1977, the Cook-Morrow House was designed by John P. Kingston, an architect from Worchester, Massachusetts in 1909. Considered at the time to be one of the most elegant houses in the county, the house remains one of the most impressive and architecturally-significant homes in Batesville. The home’s owner and builder Virgil Y. Cook was one of the wealthiest and most successful residents of Batesville.

A private with the Confederate Army and later a colonel in the Spanish-American War, Cook earned his fortune through a variety of endeavors. He worked with the Cox and Byers merchant firm until the 1870s, operated a mercantile, a sawmill and a cotton gin and accumulated as many as 8,000 acres of land across four Arkansas counties.

When the foundation for the home was laid, it was measured incorrectly and was several feet too small. A lawsuit was filed against the architect delaying the progress of the build and doubling the initial estimate from $10,300 to $23,000. The cost today would be equivalent to nearly $700,000. The home remained in the Cook-Morrow family until it was sold at public auction in 2002 following the death of Wanda Morrow.

Built in 1888, the Handford homes are mirror images and located across the street from each other at 658 and 659 E. Boswell Streets. Charles R. Handford and his brother James S. Handford, 12 years his junior, were both prominent businessmen in Batesville and were known for their work in the lumber industry. Both also worked in the stone quarry, owned a wholesale grocery and a lime plant. They were also successful bankers, helping to establish the Batesville Bank of which James was elected the first president.

Upon arriving in Arkansas in 1872, Charles built a successful lumber business in Alexander, just south of Little Rock. By 1876 his business was so successful that his younger brothers came to Arkansas to help him run the business. In 1882, the Handfords began scouting a new location for the growing business and moved to Batesville in 1884.

In 1888 the brothers decided to build twin houses directly across the road from each other. The houses are excellent examples of modest Queen Ann Style architecture that is unique to the city. Both homes were richly decorated both inside and out including colored leaded glass and ornate brass hardware. Charles Handford’s house contains a fireplace with a notable ornate Victorian mantelpiece. James Handford’s home had a coal burning fireplace surrounded by green tile which depicts five nymphs representing the five Handford daughters that were raised in the house.

Although not a residential property, we would be remiss to leave out Morrow Hall, located at the corner of 7th and Boswell Streets. Morrow Hall was built in 1872 as an academic house which served as the first permanent building of Arkansas College, now known as Lyon College. The construction was partially funded by residents of Batesville who were interested in providing religious-based, college-level learning within the city. Organized by Reverend Isaac Long, a domestic missionary of the Southern Presbyterian Church, Morrow Hall served as both a classroom and administrative building and graduated its first class of eight students in 1876.

In 1955, Lyon College moved across town to a new campus. The First Presbyterian Church acquired Morrow Hall along with several other buildings in the vicinity. The Morrow family provided a generous donation to fund its restoration, and the building became known as Morrow Hall. It was added to the NRHP in 1972 and continues to be used by the church today. It’s a beautiful, well-preserved example of Italianate and Simple Victorian Renaissance Style.

Although steamboat traffic dwindled in the early 1900s, residents of Batesville found new means of prosperity through rail trade and adapted over time to become leaders in the poultry industry. While the fire in 1920 destroyed a large section of the city, she rose from the ashes and continues to grow and prosper to this day. Click here to learn more about the other homes and buildings located in Batesville that are listed on the National Register of Historic Places.

2 responses to “Historic Homes of Batesville”