History of the White River 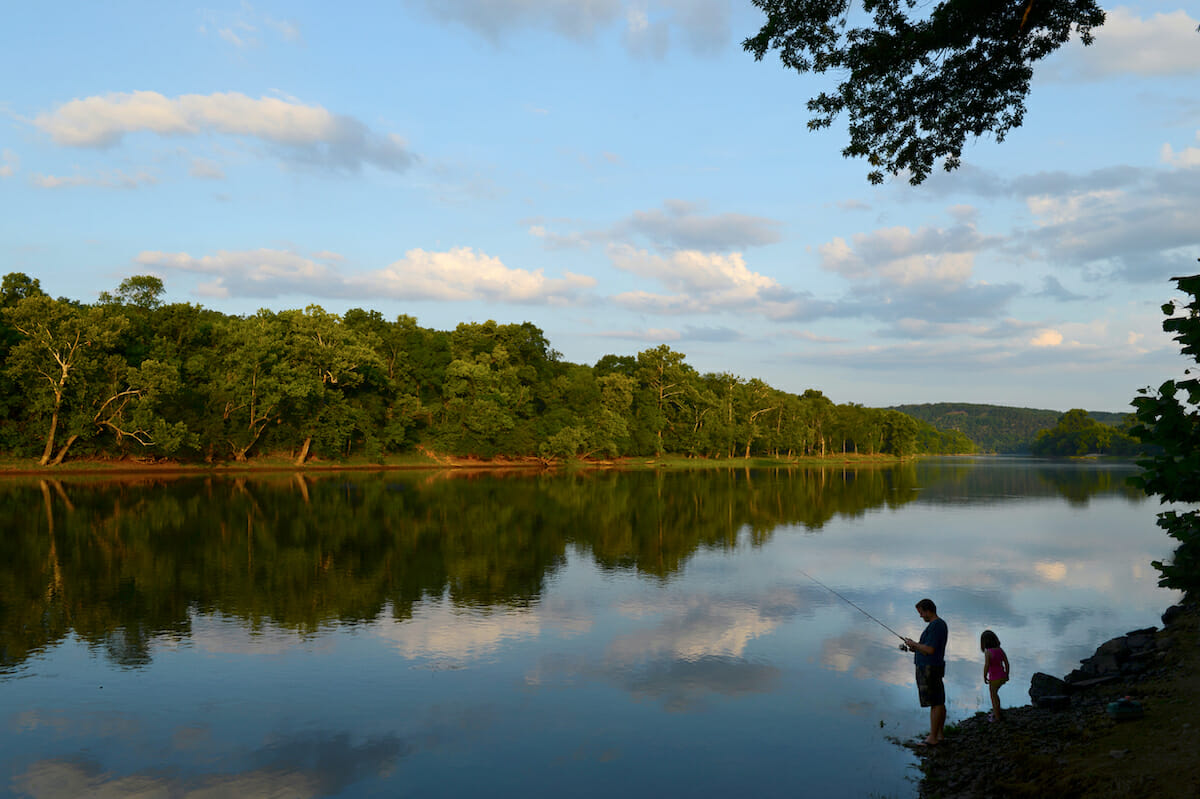 Arkansas’s White River takes a long and winding route from its birthplace among the Boston Mountains in Madison County. Coming from this northwest region, the river bends into Missouri for a brief stay and returns back to Arkansas for the remainder of its journey. The White River impacts life, industry and tourism along her banks as she snakes toward the Mississippi River and the southeast area of the state. Along the way, the river helps give birth to major bodies of water and serves as a path guiding visitors and residents to some of the most lush and vibrant scenery the state has to offer.

The White River flows for over 700 miles. With it comes a robust history of early mankind and a rich environment for people, animals and vegetation for centuries. Archaeological evidence indicates that bluff shelters along the White River were home to prehistoric people. Later, several Native American tribes built homes and trade routes, although lack of written records makes it difficult to pinpoint when and where which tribes were active. The Osage people lived along the White River in northern Arkansas and Missouri and the Cherokee were known to have built several settlements along her banks in the late 1700s. French fur trappers and traders, who typically had good relationships with the Osage and Quapaw, were among the first early Europeans to experience the wealth of the White River.

The first major documented exploration of the White River took place in 1819 when Henry Rowe Schoolcraft and Levi Pettibone traversed the White River from Missouri into Arkansas. Their expedition was intended to establish the source of the Mississippi River and clear up boundary disputes between the United States and British Canada. All along their path, Schoolcraft and Pettibone documented the geology, geography and mineralogy of northern Arkansas and later published what would become the first historical documentation of European exploration of the area now known as the Ozarks.

Schoolcraft and Pettibone completed their expedition in January of 1819 when they reached Poke Bayou (Batesville). Schoolcraft’s journals indicate the sighting of several abandoned Indian camps, likely having belonged to the Osage. He also noted healthy populations of beaver, bear, deer, turkey, otter and several small herds of buffalo.

The White River picks up speed in the Ozark-St. Francis National Forest to Batesville, where her waters become swift and powerful. It didn’t take long for European settlers to discover those waters could be a tremendous resource. At the turn of the 20th century, steamboat travel made Batesville one of the most important ports along the White River and played an essential role in the settlement of the area. However, navigation of the White above Batesville was difficult at best, making steamboat travel along northern portions of the river impossible.

In 1899, the Rivers and Harbors Act authorized the placement of ten fixed dams and concrete locks between Cotter and Batesville. In October 1903, Lock and Dam No. 1 was completed at Batesville with No. 2 and No. 3, just north of Batesville, being completed shortly after. At the same time, the railroad was making swift progress in the area and eventually took over as the primary source of shipping, trade and travel. The Lock and Dam project was abandoned although the three existing were kept in service until 1951. You can read more about the importance of steamboat history in Batesville here.

Severe flooding, including the Great Flood of 1927, occurred throughout the White River region and other areas in the country from 1915 to 1927, prompting research along the country’s waterways. In 1938, President Franklin D. Roosevelt signed into law the Flood Control Act of 1938 which along with subsequent flood control acts, paved the way for building dams along the White River and her tributaries in Arkansas beginning with the Bull Shoals Dam.

Bull Shoals Dam was built between 1947 and 1951 to generate power and control flooding. Although it has since been surpassed, the concrete dam was the fifth largest in the world at the time it was built. As a result of the dam, Bull Shoals Lake was formed.

At 94,000 acres with 1,050 miles of shoreline, Bull Shoals Lake is Arkansas’s largest lake. The lake is home to 19 parks and is a world-renowned location for bass fishing, boating and other water sports.

From 1960 to 1969, Beaver Dam was built primarily for flood control and to hold back floodwater from Table Rock Lake, formed along the Missouri/Arkansas border when the Table Rock Dam was completed in 1958.

As is the case with many man-made lakes, the flooding of the valley to create Beaver Lake covered many settlements, including the once-thriving resort community of Monte Ne. Monte Né remains underwater most of the time, but on occasion, when water levels are shallow, the skeleton of the former resorts rises into view. You can read more about Monte Ne here.

South of Batesville, the White River slows and meanders, quite the opposite of the swift-moving waters of the Upper White. The Lower White primarily supports agricultural and commercial use before it empties into the Mississippi River. It is navigable in both directions, and barge traffic runs along a shallow channel for 250 miles from the Mississippi to Newport. Interest in deepening this channel has created a bone of contention between the U.S. Army Corp of Engineers and the U.S. Fish and Wildlife Service over the fear that it will disrupt the delicate wetlands and negatively impact communities that depend on them, including Stuttgart, The Duck Capital of the World.

From its headwaters in northwestern Arkansas to where it flows into the mighty Mississippi, the White River brings in millions of tourism dollars for the state of Arkansas. From her lakes along the Upper White, which attract millions of visitors annually, to the White River National Wildlife Refuge located along 90 miles of the Lower White, the river attracts hunters, fishers, boaters, and bird lovers. Native black bear and bald eagles can be found throughout her watershed and she may even be hiding the elusive Ivory Billed Woodpecker. Trout fishing near Cotter and duck hunting near Stuttgart on the White River is said to be some of the best in the country.

Check out these articles which cover areas of interest all along the White River:

All photos provided by the Arkansas Department of Parks and Tourism unless otherwise noted.

3 responses to “History of the White River”