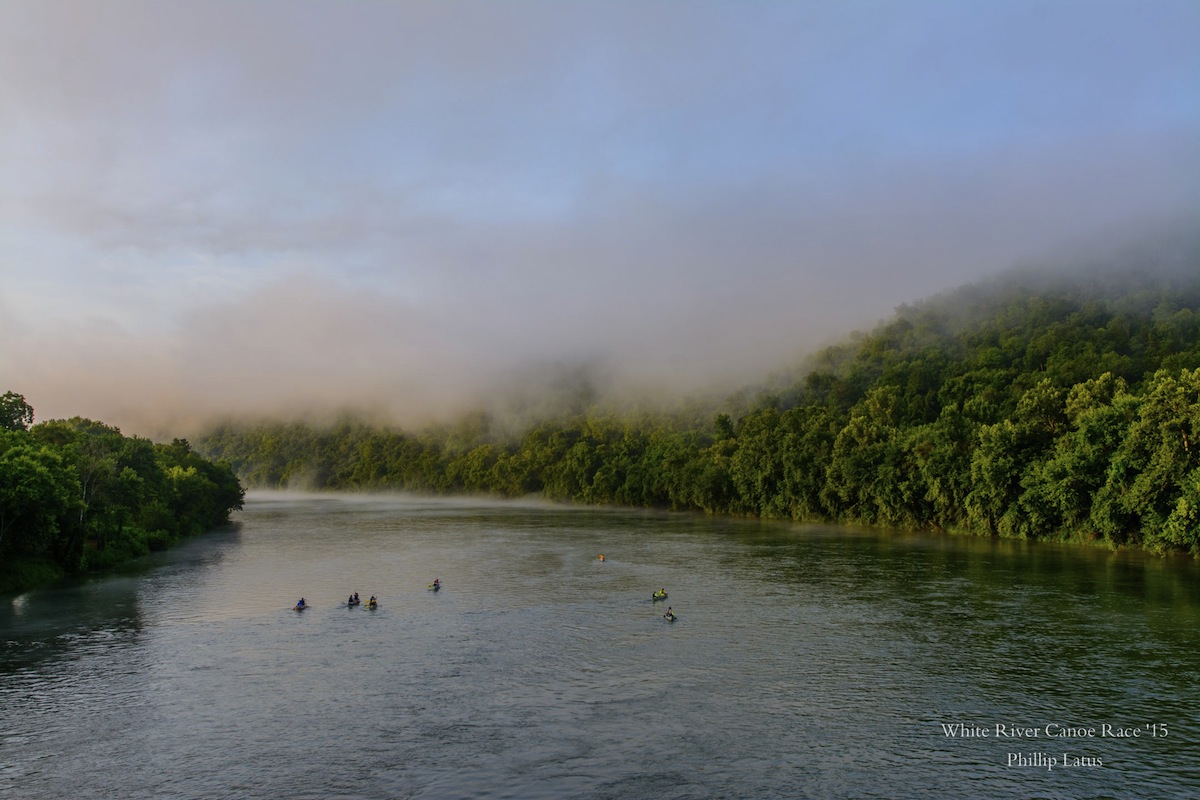 This summer, Boy Scouts across America will gather in Arkansas for the 50th Annual National White River Canoe Race. In this three-day race that occurs July 27-30, hundreds of Boy Scouts in teams of 4-6 will race 120 miles on the icy White River through the Ozarks for the prize—the Traveling Trophies, awarded for the best times in each division and one for the best time overall.

The race begins near Mountain Home at the base of the Bull Shoals Dam and follows the path of the river into Batesville. The daily distance to be canoed is divided into eight legs called heats, and team members take turns paddling two at a time, changing out at the beginning of each new heat. As the canoeists race to the end of each heat, vehicles with the paddlers for the next heat are also racing (but not speeding!) ahead to meet the canoes at the next location. Traffic—such as a train blocking the road—or car problems could negatively affect the teams’ scores. One year a fallen tree blocked a one lane road leading to a boat ramp, and more than 30 vehicles with canoe trailers had to negotiate a tight turn and find an alternate path.

Locations of heat exchanges include Cotter, Buffalo City (where the Buffalo National River joins the White River), Norfork, Calico Rock and Sylamore Creek. The White River flows rapidly from Bull Shoals Dam, helping canoes gain speed the first day, when a distance of 44 miles is canoed. Participants and their families camp out each evening at local sites, such as in Quarry Park by the Lake Norfork Dam the first day, and hot meals are provided for everyone involved. A shorter distance of 35 miles is covered Day Two, and scouts display their abilities in a talent show that evening. The river current slows by Day Three and the final distance of 41 miles is more difficult to canoe, though teams still manage speeds of 8-10 mph.

Fogs are frequent on the river, and in spite of the heat of summer, a tent’s rain fly must be used because of the moisture from rising fogs at night. In the morning, the fog obscures the vision of those on the water as they race. The canoeists remain a safe distance from dams and follow safety precautions, such as wearing life vests and shoes and carrying extra paddles.

Boy Scouts teams journey to Arkansas from all over America. Participants represent distant states such as Maryland and California, though the majority of teams are from Arkansas, Louisiana, Texas, Oklahoma and Missouri. About 250 participated in the race last year, including six teams of girls and two coed teams, but that number does not reflect the support team behind the canoeists.

“This has always been a family-oriented event,” explains Eagle Scout Robert Latus of Crew 320 in Batesville, who designs and manages the event website in addition to racing each year. “For example, teams like Crew 313 from Bogalusa, LA might have 20 scouts racing but what most people don’t realize is they have 100 plus adults follow them down the river.” Even more canoeists and family members are anticipated this year to celebrate the 50th year of the race, and Latus hopes many alumni racers from as far back as the inaugural 1966 race will return to compete in the “Old Timers” division. Other divisions reflect variable levels of ability and experience and most participants are ages 14-21.

The excitement of the race and the enjoyment of camping have been bringing hundreds of people associated with the Boy Scouts to Arkansas for the past 50 years. Many Arkansans participate, and Crew 300 from Russellville has won the trophy for best time overall several times, most recently in 2014. In addition to those competing and their families, local communities enjoy supporting the race. Friends of the Rivers volunteers and members of Chambers of Commerce welcome families and cheer participants at many change-over locations. Join them at a change-over location near you, and let’s root for an Arkansas team to win—is there a home court advantage, perhaps?—but pray that everyone has a safe and enjoyable time competing on the White River.

0
0
Rand Brewer: Racing to be a Pilot
Adria English