Pattie Cobb – The Queen of Campus 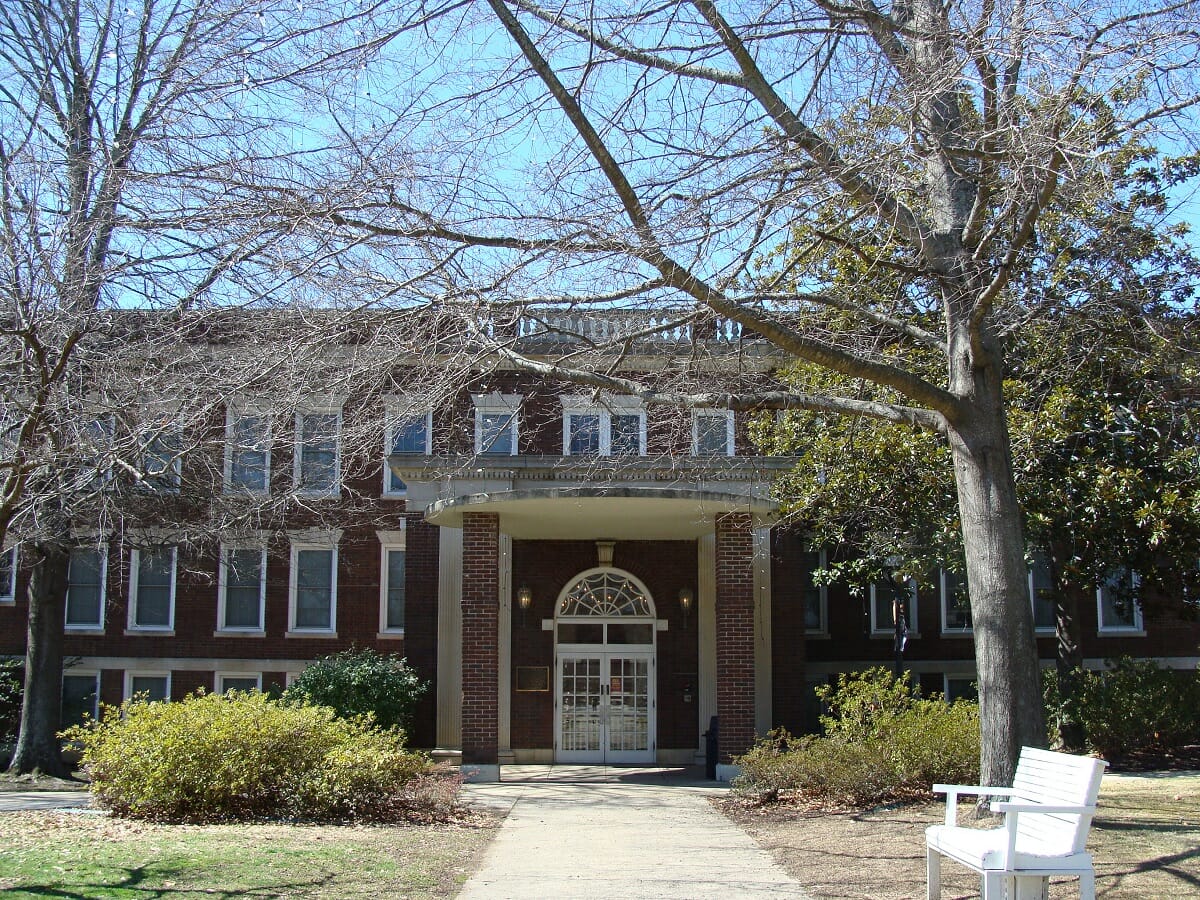 My college dormitory, Pattie Cobb, was constructed in 1919. Originally Holmes Hall, she’s one of the last two structures from the original Galloway Women’s College. Harding University, my alma mater, purchased Galloway’s property in 1934, and now Pattie Cobb sits at the center of campus, surrounded by tall trees and steeped in traditional college charm. She makes a grand and distinguished picture, bookmarked by pillared verandas that bring to mind tall glasses of lemonade and old money. She is, without a doubt, the queen of campus.

As you enter through the main doors and walk down dual staircases, chandelier overhead, its polished appearance makes it easy to forget the building has had many faces over the years. It was first a residence hall for the women’s college, then a spliced dormitory- office-cafeteria, and now she’s back to a full time women’s residence hall. Hundreds of thousands of meals were served in her cafeteria basement for over 40 years until it closed, and my own mother, who was a student in the 1970’s, would often visit me, sniff the air and say, “I can still smell the green beans.”

It decidedly did not smell like green beans (my mother’s olfactory nostalgia aside), and the basement cafeteria is gone, replaced by additional dorm rooms. The interior walls were covered in what was referred to as Pattie Cobb Purple, a shade somewhere between lavender and gray (although currently they’re a decidedly less quirky shade of beige).

The day I moved in and began my job as resident assistant, the dorm mother, Joetta Martin, welcomed me, winked and said, “Watch out for Gertie.”

Gertie, as it turned out, was the legendary ghost of Harding’s campus. And because I believed at the time (and still do) that all respectable old buildings need a good ghost story, the prospect thrilled my heart.

The legend originated in Godden Hall, a massive Gothic structure originating with Galloway Women’s College. Gertrude’s tale was a tragic one. She was a student, and after returning home one night to Godden Hall, plunged to her death down an abandoned three story elevator shaft. It was ruled an accident. Rumors flew, complete with tales of foul play.  Following her death, the rumored ghostly occurrences began. Students began reporting a woman in white walking the halls, and sometimes through walls.

Years later Gertie’s home, Godden Hall, was torn down. Harding University purportedly reused its bricks on some construction to nearby Pattie Cobb and a music building. It was at this particular juncture haunting stories began in both places. Apparently Gertie was a flexible ghost and willing to relocate (not to mention that she was game enough to delve into the wide world of twitter for a brief time).

I lived in Pattie Cobb for two years. I adored every minute. I never experienced any of the typical “blame Gertie” ordeals, like misplaced objects or slamming doors that had become the stuff of legend. But the week before I made my final move from Pattie Cobb, things changed.

I was one of just a few girls left staying in the building. On my last night I ordered a pizza. I made my way down stairs to get the food, said hello to a few remaining friends, and then went back to my room on the third floor. As I rounded the corner I noticed something amiss. At the far end of the hallway one of the french doors that led to the veranda was ajar. I found it odd that anyone would be out there considering the late hour, especially given the small number of students still in the building. I walked down the hallway and reached out to pull the cracked door closed, and as I reached out, the door moved away from my hand, opening a little further.

I paused for a moment, hand outstretched, and reached again. The door moved a few inches further.

At this point I peered past the curtains to see if someone was standing on the other side, pulling the door away from me. No one was there. Feeling a little brave, I walked through the cracked door and looked around the veranda. It was a warm spring night and crickets chirped, the nearby streetlight buzzed, but the veranda was empty.

It was at this particular juncture I decided to give in and admit I was thoroughly spooked. Despite reasoning with myself that it was simply a case of old building air currents and creaky door frames, I went back inside, slammed the veranda door shut, secured the lock, and then proceeded to lock myself and my pizza in my room for the rest of the night. But as I consoled myself with melted cheese and carbs, I couldn’t help but smile.

It was as if the elusive Gertie and Pattie Cobb, the queen of campus, were giving me a spooky, yet friendly, send off into the wide world of adulthood.

One response to “Pattie Cobb – The Queen of Campus”