Arkansans Behind the Names: Part 1 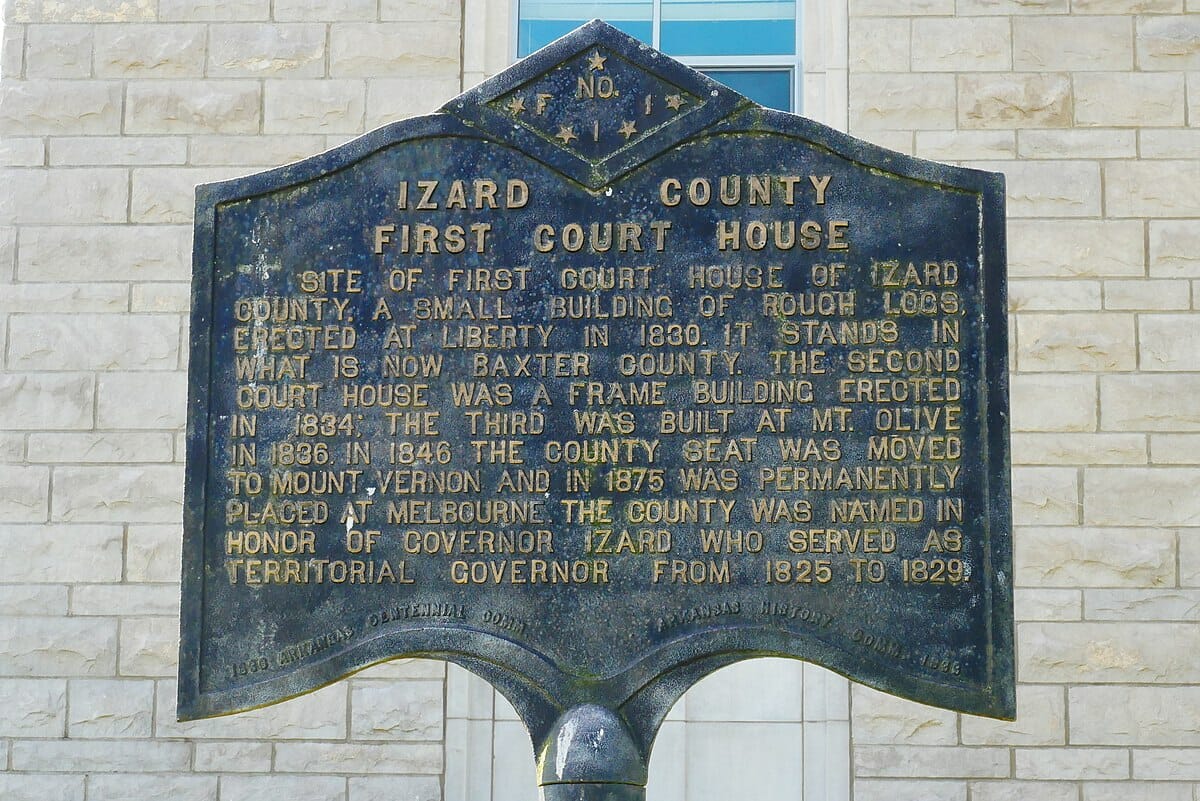 Greasy Corner, Oil Trough, Umpire and Possum Grape – Arkansas possesses a roster of place-names that trumps the limits of any writer’s imagination. But “the name behind the place” has always fascinated me. Growing up in Mountain View, and in Stone County, I found our local place names to be self-explanatory. You could see all the mountains, and step on all the rocks (just ask anyone who tries to garden or dig the foundation for a house). But just across the river bridge, was Izard County. As a child, that name fascinated me, and I felt sure that Izard County was named after a lizard.

But Izard county was not named after a reptile. It was named after a man. As I’ve lived and traveled across the state, I often wonder “who was that” when reading a county name sign, or passing a street name on the way to the grocery store. These places were named after people, living breathing Arkansans who shaped and contributed to our state in historic ways. Today we will explore a few, and read about the Arkansans behind the names.

His is a name that is synonymous with all-things Conway (including a street named for his wife, Louvenia), the student center at UALR, and a building in downtown Little Rock. George Washington Donaghey shaped our state’s government, education system, food and drug sanitation, and prison reform. After growing up poor, and with limited access to education, he worked hard and eventually became a building contractor. He married and started a family. They moved to Conway where he was active in higher education, contributing one-third of his assets toward a fund to move Hendrix College into the town. He headed fundraisers and pledged money to Arkansas State Normal School (which eventually became the University of Central Arkansas), as well as the Central College for Women. He successfully rid the town of saloons and would go on to serve three terms as the Governor of Arkansas.

Before he left office, he pardoned 360 inmates in the Arkansas prison system. He was adamantly against the inhumane system of “convict leasing” in which convicts were used to work on state farms. Two months after his pardons, the Arkansas Legislature abolished the practice. After his terms as governor, he continued his support of higher education, specifically supporting Little Rock Junior College, which would become the University of Arkansas at Little Rock.

Fulton County, best known for the cities Salem, Mammoth Spring and Viola, was named after William Savin Fulton. Arkansas’s first junior senator after statehood, and Arkansas’s last territorial governor, William Fulton led a life of frontier adventure, political success, and controversy. Born in 1795 in Maryland, Fulton was born into a wealthy family and received an outstanding education (he attended Baltimore College). He served in battle at Fort McHenry during the War of 1812 and worked for General Andrew Jackson as his private secretary. He was appointed the secretary to the territory of Arkansas.

He embarked on conducting the territorial business of Arkansas, while also filling many official posts through nepotism. His brother-in-law was granted a prominent position in association with Fort Gibson, his father was postmaster in Little Rock, and his brother became the governor’s secretary. He built his mansion, Rosewood, where the present-day governor’s mansion stands. Fulton was appointed governor by Andrew Jackson in 1835, and he caused great controversy by opposing Arkansas leaving territory status and becoming a state. In 1836 he was appointed to the U.S. Congress.

In a tale that has become a likely mixture of folklore and fact, Fulton died an early and mysterious death in 1844. Allegedly, according to family, he fell asleep in a freshly painted room and died. He is one of many famous Arkansans buried in Mount Holly Cemetery.

The namesake for an Arkansas County (Chester County) and two Little Rock street names (Chester and Ashley Streets), can be traced back to Chester Ashley. One of the wealthiest Arkansans of his time, Ashley was an attorney and a member of the U.S. Senate. Like Fulton, Ashley was born in the northeast in Massachusetts. He attended law school in Connecticut. He moved westward and ended up practicing law in the Arkansas Territory. He represented a group of men who claimed ownership of the land where Little Rock is now built, despite another group’s claim to the same land. The court eventually ruled that the two groups split the disputed land, and Ashley’s share helped make him very wealthy.

Ashley would continue to be involved in well-remembered litigation cases, such as a court case involving James Bowie and fraudulent land speculation. He was elected Senator in 1844 and served until his death in 1846. He is yet another legendary Arkansan resting in Mount Holly Cemetery.

Unlike my childhood imaginings, Izard county was not named after a giant reptile reminiscent of a 1950s black and white sci-fi film (my childhood imagination held much room for embellishment). Izard County was named for Izard. With a last name that hailed from English and Norman ancestry (mean “ice” and “battle”), George Izard was born in England. Both of his parents hailed from the colonies and were patriots (his father was from South Carolina and his mother from New York), and once the Revolutionary War began to loom, the entire family escaped to France.

After the war, the family returned to the newly created United States of America, where George and his 12 siblings acclimated to American life. He went on to earn a degree from Columbia in New York City. He pursued a military education in France, eventually returning to the U.S. to become aide-de-camp to General Alexander Hamilton. After a few more phases of job hopping, he ended up in a duel with a young woman’s brother (evidence of a somewhat dramatic personal love life). Although no one was killed, both were injured.

Izard eventually settled down and married a widow. He became a brigadier general in the War of 1812. Afterward, he was nominated by James Monroe to become Arkansas’s second territorial governor. This polished, educated, well-traveled man arrived in the Arkansas territory and was aghast at the unorganized government and lawless atmosphere. Izard proceeded to set Arkansas on the straight and narrow. He established the arsenal in Little Rock, advocated for the industrialization and trade of Arkansas’s salt supply, and built a strong militia. A blemish on his record (although typical for male leaders and politicians of his time), he advocated for an “Indian Removal” policy when dealing with frontier hostilities. He would serve Arkansas until his death in 1828, and is buried in Chester Ashley’s plot in the Mount Holly Cemetery.

Stay tuned for Arkansans Behind the Names Part II!