Will and Betty Blake Rogers: The Arkansas Girl and The Cherokee Cowboy 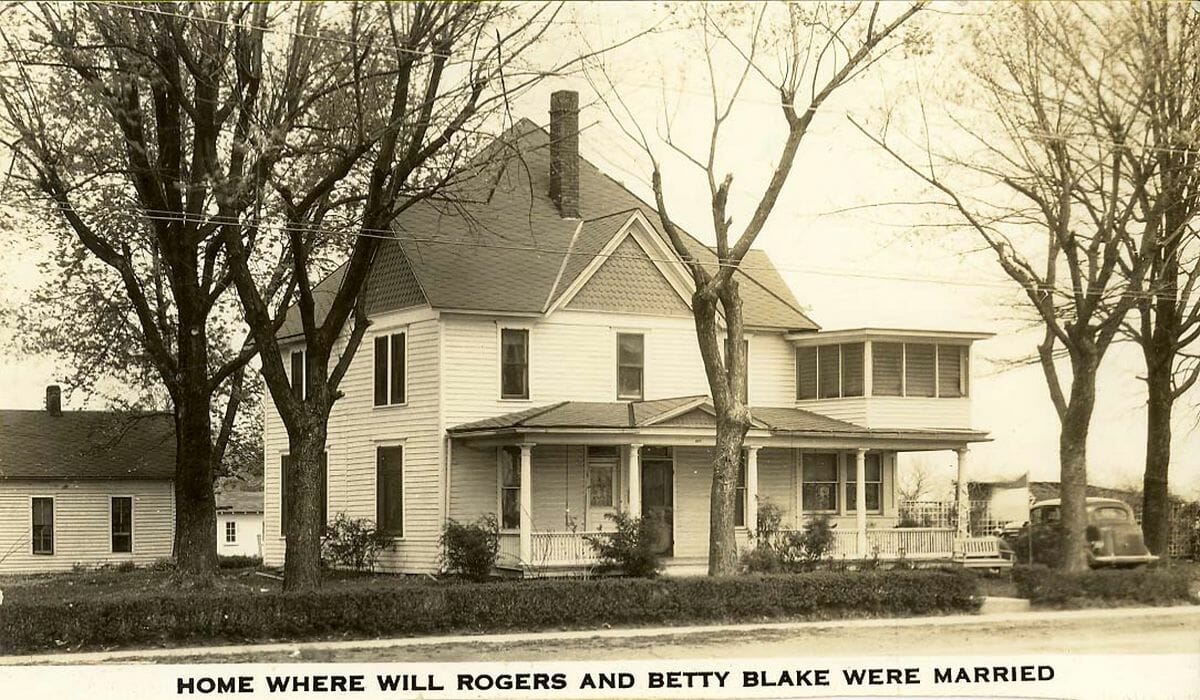 You may have heard of Will Rogers, arguably the most beloved humorist and entertainer of the early 20th century. You may even know he was a Cherokee citizen born in what was then called Indian Territory in Oklahoma. But did you know that his wife, Betty Blake Rogers, was born and raised in Northwest Arkansas?

Betty was the seventh of nine children born to James Wyeth Blake and Amelia Crowder Blake. James operated a small sawmill in the community. Betty was very young when her father died, leaving her mother to raise their children alone on a dressmaker’s income. To improve the family’s financial prospects, Amelia moved the family a few miles north to Rogers.

Betty met Will in 1900 while visiting with her sister in what would become Oolagah, Oklahoma. At that time, Will was only 20 years old and worked in rodeo shows performing rope tricks for audiences across the state. But he was also the son of an Oklahoma banker/rancher-turned-congressman with a great sense of humor. And that must have been enough for Betty.

The couple spent the next several years getting to know one another primarily through correspondence as he traveled the country and built his career in show business. Betty was an independent woman of the time with responsibilities back in Rogers. She was employed as a sales clerk at the H.L. Stroud Mercantile Company, a typesetter for the Rogers Democrat, and a railroad telegrapher.

Betty enjoyed popularity amongst her peers at home and was herself a performer in local theater productions. In fact, it was Betty’s notoriety, not Will’s, mentioned in the small engagement announcement published in the Rogers Democrat in November 1908. A notice about the wedding a week later called her “one of the best-known young ladies in Northwest Arkansas.”

When Will finally proposed to Betty in 1906, she was not enthusiastic about being the wife of an entertainer. To his credit, he tried again in 1908, and this time promised to settle down back in Oklahoma after he wrapped up the tour he was on at the time.

The couple honeymooned in New York City, where Will had some tour dates planned. Then they spent some time in Europe before returning home to Oklahoma. Somewhere along the way, Betty became as enamored with his act as his audiences. And soon enough, she was encouraging him to continue performing and became his business manager as his career grew.

Betty toured with Will until she had their first child, Will Jr. Then, she spent long stretches of time back home in Rogers. In 1919, they moved their young family to California, where Will’s movie career kept him busy in Hollywood.

The Rogers’ youngest son, Jim Rogers, quoted his father as saying, “The day I roped Betty was the greatest performance of my life.” Jim went on to say, “If it had not been for Betty Blake from Rogers, Arkansas, there never would have been the Will Rogers much of the world knew and loved.”

Unfortunately, Will and Betty’s life together only lasted until 1935, when Will died in a plane crash while touring with a friend in the Alaskan backcountry. Betty followed in 1944 after a bout with cancer. The Rogers are buried side-by-side in Claremore, Oklahoma, where the Will Rogers Memorial Birthplace & Museum is located, not far from his family homestead on the shores of Oolagah Lake.

More Information about Will and Betty Blake Rogers

If you’re interested in reading more about this famous couple, Betty Blake Rogers wrote a memoir about her life. She wrote another about her famous husband that isn’t in print but can be found on used book outlets. There are several books available that collect Will’s writings and quotes, and his movies are still sold, as well. The biographer who helped Betty put her memoir together also wrote a book about the Rogers’ courtship based on their letters.

The American writer and journalist Mignon McLaughlin is quoted as saying,...

1
1
Cool Down with Shady Getaways in Arkansas
Laurie Marshall

The summer months are upon us in Arkansas and you know what that means....

3 responses to “Will and Betty Blake Rogers: The Arkansas Girl and The Cherokee Cowboy”