The Block House: A Cornerstone of Arkansas Jewish Heritage 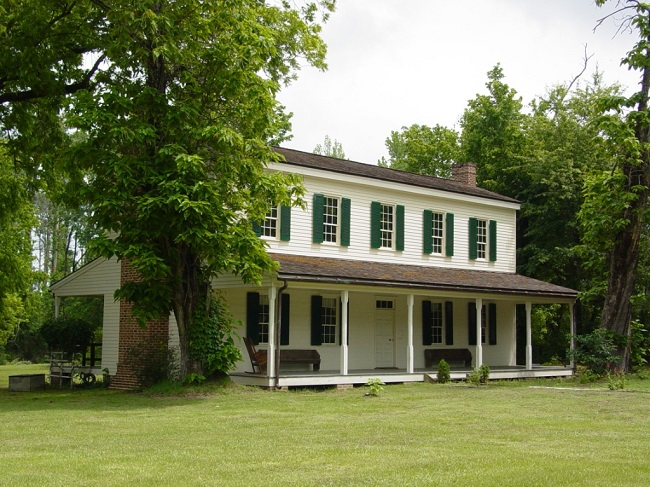 About a decade ago, I began tracing my family tree back as far as I could take it. It was fascinating to see how each generation made their way across the country, starting in the North Carolina region and little by little expanding across the frontier.

A few years ago my mother gave me a sugar bowl. It dates back six generations to Margaret Turner, born in 1785. The story goes that this sugar bowl was perhaps the only surviving piece of the set of dishes she received as a wedding present. According to family lore, the dishes slid off a table and broke during her journey westward.

It’s not much to look at, this sugar bowl. But as we get older, our family’s story and pioneering efforts mean more to us because we appreciate how much they sacrificed and worked to carve out lives on a frontier that was less than kind.

I thought about my family sugar bowl as I researched information on the Block House in Historic Washington State Park, home to Arkansas’ first Jewish family. I considered it because as hard as it was for my ancestors to expand westward into territories unknown, how much harder must it have been for those immigrants who did it without the support of a larger religious community? How much harder for immigrants that perhaps looked or sounded different than the majority?

I believe that it speaks to the fortitude of our country, a nation built on the bravery and fortitude of immigrants from all over the world.

In the late 1700’s, Abraham Block (sometimes spelled Bloch) immigrated to the United States from Bohemia (modern day Czech Republic). He would go on to travel the U.S. and become a captain in the War of 1812. Years later he would become head of the first Jewish family to immigrate to the state of Arkansas.

Block opened a store in Washington in 1825, and would eventually become one of the wealthiest men in the county. But life for his Jewish family must have been a culturally lonely one, as there were no Jewish communities nearby. They became members of the first synagogue in New Orleans, but they still faced isolation here in Arkansas.

The Block family stayed in Washington, growing in number (although only 6 out of the 14 Block children survived into adulthood). Abraham and his sons established a regional span of businesses in Arkansas, as well as Louisiana. But it is their family home in Washington State Park that keeps their memory and history alive.

Built by Abraham Block in 1832, the Block House is one of the few Federal-style structures remaining in southwest Arkansas. Block was the first documented Jewish settler in Arkansas in the late 1820s. He started a prosperous mercantile business in the region. In 1959, the house was the first restoration project undertaken by the Pioneer Washington Restoration Foundation. The exterior was later returned to its original design in 1987.

When I interviewed Josh Williams, historian at Historic Washington State Park, he talked about his favorite part of the Block House, the “Funeral Door.”

“It is a side door of the house that entered into the parlor/common living space. In antebellum Southern Architecture, it was normal to have a door of this type in an area where food was served. Slaves that worked in the kitchen delivered food through it, and it was also used for funerals. There were no funeral homes so the viewing of the body right after death would take place in the parlor or common area.”

The home’s interior structure was also built solidly, and a section of the wall remains open to show visitors the original hand-hewn timbers that make up the frame of the house.

Josh also noted, “They are put together with wooden pegs only, no nails.”

Years later archeological digs were also done on the property around the house, unearthing pottery and household items, in addition to pork and catfish bones near the old kitchen site.

Josh explained, “It is possible that the family did not live a kosher lifestyle since there were no other Jewish groups in the area.”

Even though their limited contact with other Jewish families may have hampered their tradition of kosher meals, some of the archeological work hinted that the family was able to practice other Sephardic practices, such as the atonement rite of kapparot. The limited contact with other Jewish families or communities created an isolation that likely led to all but one of the Block children leaving the Jewish faith.

Abraham died unexpectedly in New Orleans in 1857. His wife Fanny, the matriarch of the family, chose to leave their family home in Washington and live with a son in New Orleans. She passed away in 1871. There were no journals or diaries left behind by the Blocks, but the home’s preservation gives us many clues and insights into the daily lives of the Block family.

Not all of our families have an ancestral home still standing. Some of us have stories, and if we’re lucky, a sugar bowl or the like. But whether it’s a family home, or a piece of pottery, or a story told by grandma, these tokens are a testament to the bravery, sacrifice and sense of adventure that filled the early pioneers of Arkansas and the south. The Block House is a testament to not only the early settlers of our state but a tribute to the first Jewish family to call the Natural State home.

One response to “The Block House: A Cornerstone of Arkansas Jewish Heritage”