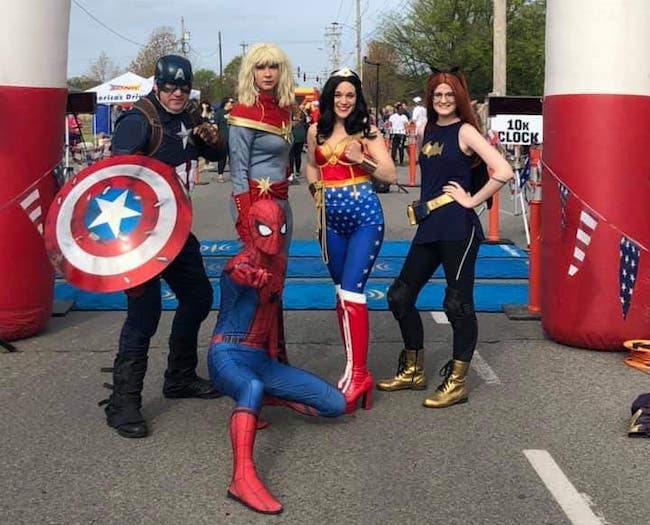 Children love dressing up and seeing their favorite characters in costumes. Soon after the back-to-school excitement wears off, children start thinking about what they will be for Halloween. Not to be outdone by the little ones, grownups are also scouring the web in search of fun adult and family-themed costumes. Just because we reach the age where going trick-or-treating is no longer socially acceptable, we don’t have to stop dressing up. Enter cosplay.

The popularity of superhero movies, “Harry Potter,” and sci-fi favorites like “Star Wars” and “Star Trek” have also prompted individuals all over Arkansas to get involved in cosplay. Several members of the Arkansas Cosplay Network are going above and beyond doing good behind the mask.

Cosplay (costume play) is an art form that involves dressing up in costumes and accessories, often handmade, to represent a specific character. The term was coined in Japan in the 1980s, although the concept of dressing as a beloved character can be traced back to a sci-fi convention held in the 1930s. In recent years, cosplay has grown in popularity along with comic book and movie conventions held across Arkansas and around the country.

As cosplay moved into mainstream culture, more people got involved and with that came more opportunities to dress up. People began to reach out to local cosplayers to participate in parties, movie and book releases, comic book conventions and even charity events. Hoping to connect with like-minded cosplayers, the Arkansas Cosplay Network was formed on Facebook. The network allowed cosplayers to locate events and gather together for themed photoshoots or to share ideas for making costumes.

While many cosplayers schedule paid appearances and make enough money to at least supplement their costume budget, some are stepping out for a greater good. I spoke with several area cosplayers who realized the joy expressed by children when they saw their favorite character in person. Each decided that bringing a smile and a few moments of happiness were worth more than money. Whether they are showing up at Make-a-Wish events, childhood cancer research fundraisers or local foster care events, these local cosplayers are fighting off the evils that threaten children and hoping to do their part as real superheroes to save the world.

Father of three, Lennon Parker, has loved Iron Man since he was a child. Parker has a collection of Iron Man collectibles currently being verified for the Guinness Book of World Records as the world’s largest private Iron Man collection. So, it only made sense that he would choose to dress like Iron Man when he got involved in cosplay six years ago.

Parker came across a flyer for an Arkansas Children’s Hospital charity event needing cosplayers to appear and interact with children and their families. The rest is history. Parker attends charity events nearly every weekend and has already raised over $100,000 for Arkansas charities this year.

“Many of these events help take away the [families’] financial burden. A fictional character can bring so much joy. When the kids see me, it’s the real deal for them.”

Parker recently received a community service award from the Arkansas Cystic Fibrosis Foundation and a message of recognition from Hollywood actor Dean Cain, who portrayed Superman in the 1990s television series, “Lois and Clark: The New Adventures of Superman.”

An art teacher in the Conway school district, Crystal Certain, got her cosplay start following a dress-up day during spirit week at her school. Her long blond hair and flowing blue dress reminded her students of a character in a popular Disney cartoon. She fell in love with the idea of becoming a character after a former student invited Certain to dress up and help with a book event for children.

Certain has also been making headlines over the last year for her work developing the Certain Little Free Pantry, which provides food and snacks for children in the Conway School district. Certain primarily does cosplay for charity events but admits she has done a few birthday parties in exchange for donations to the pantry.

Certain’s favorite charity events are the Superhero Dash & Bash and Heroes and Angels.

“The best events are also the hardest. It really hits you as a mom. We’re there to lighten the mood, and we do, but you know when we leave, and everyone goes back to real life, real life is really hard. It’s a double-sided coin, for sure.”

Katie Collins – Happily Ever After

Katie Collins began cosplay in 2014 for AnimeCon Arkansas. An avid costume designer, Collins has experimented with many different looks and styles. She got involved with charity work in 2015 when the Make-a-Wish Foundation reached out and asked her to visit with a young girl whose cancer treatments made her too sick to make a trip to a Disney theme park.

Collins became hooked on attending charity events and has since been involved with Make-A-Wish Princess Balls, Children’s Hospital visits, the Arkansas Down syndrome events, Heroes and Angels and her favorite event, the Arkansas Angels Pageant.

“I love getting to give back to these children who are truly superheroes and are such fighters. Ever since the first time that I saw a child run toward me with their arms open, so excited to see their favorite character, I’ve been hooked! I’m so honored to get to give back to my community and to organize other princesses for events in the way that I am able to.”

Collins enjoys cosplay so much that she started a business called Happily Ever After Parties. Collins, along with several others, are available for hire as princesses for parties and public events. And of course, the princesses are also often seen at charity events across Arkansas.

Emily Buchanan began cosplay several years ago when she joined a central Arkansas cosplay group called Titans South. The group of about 15 members attends charity events in costume, and Buchanan is their resident Wonder Woman. Having recently given birth to twins and enrolling in the teaching program at the University of Arkansas in Little Rock, Buchanan’s involvement has slowed down a bit…for now. In addition to Wonder Woman, Buchanan also dresses as Gamora, a Steam Link Belle, Rey from “Star Wars,” Sally Jupiter and has ideas for other costumes. Buchanan’s favorite events involve the NICU’s at area hospitals.

Buchanan’s twins were born at 29 weeks, an experience that gave her an in-depth understanding of the importance of the NICU.

“Doing charity work for children… That’s where it really is for me and my big why behind why I cosplay. Being creative, having fun, and getting to watch a child’s eyes light up as they see “Wonder Woman” and being able to make a special memory for them. That’s an honor and is just so humbling and is something that brings me joy. I’m just so thankful I get to be a part of that.”

Heroes and Angels is a nonprofit organization that assists families affected by childhood cancer with nonmedical needs. They also support military families in need. As their co-founder, Bullock knows firsthand the essential roles that cosplayer have in helping nonprofits and charity organizations with fundraising efforts.

“Cosplayers are a big part of what we do. Most of the children we work with aren’t able to go to big events or conventions, so we are able to bring their favorite characters to them. Seeing a child’s face light up when they meet their hero is absolutely beautiful. Cosplayers let these children know that they are not fighting alone and that they have superheroes right next to them. It gives them hope. It gives them strength. And it shows them how strong they really are.”

If you are interested in cosplay or being involved in any charity events, you can find more information below.