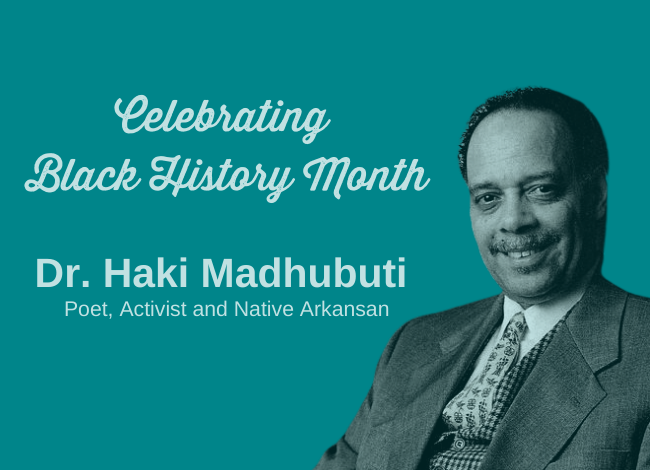 Anyone who volunteers in their community knows that one of the most important things we can do to make a difference is to raise our own voices and utilize our skills to shine a light on needs that are not being met. But those of us who work in the arts – writers, artists, musicians, to name a few – can sometimes fall victim to a feeling that our work isn’t a good fit for that kind of effort. Dr. Haki Madhubuti would disagree.

Dr. Haki Madhubuti was born in 1942 in Little Rock and raised in Detroit, Michigan. His mother, Maxine, died when he was only 16, but not before her struggles with poverty and drug addiction inspired her son to pursue higher education and become a leading figure in the Black Arts Movement of the 1960s.

After receiving a degree from Chicago City College in 1966, Dr. Madhubuti went on to earn his MFA at the University of Iowa in the prestigious Iowa Writers’ Workshop. In 1967, at age 25, he and some colleagues founded Third World Press in the basement of his home in Chicago. As the oldest independent publisher of Black thought and literature in the country, Third World Press was founded and still exists to provide Black writers and intellectuals with an outlet for their words; voices too often overlooked in mainstream literature.

Dr. Madhubuti’s own writing highlights issues of racism, violence, stigmatization, and oppression of Black people. That’s where his belief that artists have a place in activism comes into play. Dr. Madhubuti believes it is the “duty” of artists who are aware of injustices perpetrated on Black communities to bear witness to it in their work, stating in an interview in 2006:

“If an artist, or any person, actually understands the condition of the Black world, it will be a dereliction of duty to not write about that world and expose the injustices that exist in it … the conscientious poet, I define as one whose major responsibility is to not just be the best poet possible, but to adhere to the truth, live the truth, and tell the truth wherever it may go.”

Dr. Madhubuti’s long list of achievements span several decades of commitment to causes he is involved in. He is a founder of the Institute of Positive Education/New Concept School, a co-founder of Betty Shabazz International Charter School, Barbara A. Sizemore Middle School, and DuSable Leadership Academy, all of which are in Chicago. He also co-founded and Chaired the board of the International Literary Hall of Fame for Writers of African Descent and founded and directed the National Black Writers Retreat. And most recently, he was the founder and Distinguished University Professor of the Gwendolyn Brooks Center for Black Literature and Creative Writing and director of the MFA in creative writing program at Chicago State University. And somewhere in there, he managed to write at least 28 books.

You can learn more about the fascinating life of Dr. Madhubuti here, here and here.