Community-Centered Living in the Dels

0
Get Excited About Cheesecake on point!
Kevin Shalin

I have been keeping an eye on Cheesecake on point!, the... 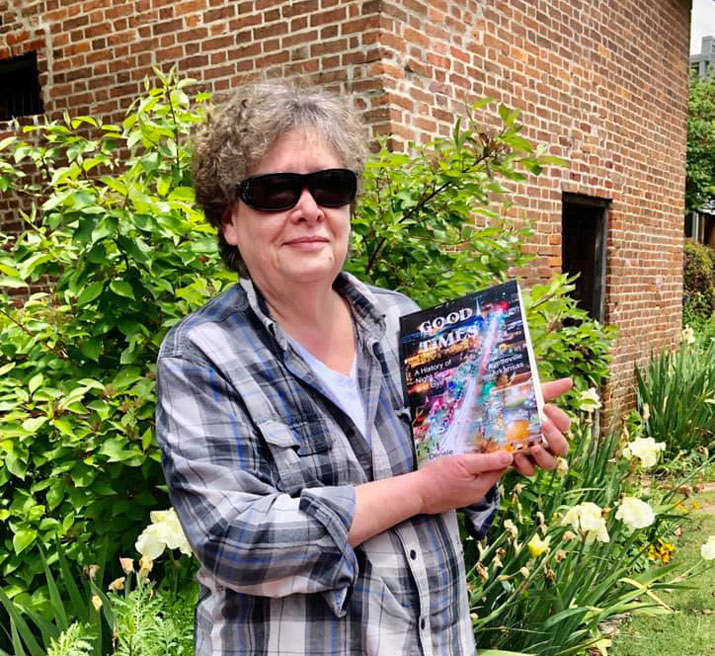 A new book chronicling the long history of the music scene in Fayetteville was released this spring.

The book, called Good Times Fayetteville: A History of Nightspots and Live Music in Fayetteville, Arkansas, was written by longtime local resident Denele Campbell and covers the scene spanning the better part of the last century.

The 500-plus-page book includes write-ups on dozens of bands and venues that have made up the scene over that period, along with information on the music stores, concerts, recording studios, promoters, and booking agents that have contributed to the reputation of the city as a nationally-known live music hub.

Campbell had a bit of a unique view of the scene over the years, as a local piano tuner, regular concert attendee, and also as the owner of the Quonset huts on Center Street that have been home to rehearsal studios for a host of local musicians over the years. The huts, in fact, are currently home to the DIY-venue, Backspace. Campbell also built Huntsville Avenue Studios to create rehearsal spaces for Fayetteville bands.

From the description of the book:

In this history of Fayetteville’s nightspots and musicians, we celebrate the ancient human tradition of music and dance. These nightspots were – and still are – places where live music finds its most enthusiastic audience, where musicians practice a craft as old as time, where the drumbeat and lyrical voice travel straight to the heart for all who hear.

Among the hundreds of start-up bands pursuing their moment in the spotlight, some of Fayetteville’s bands and musicians have gone on to national, even international fame. Perhaps more importantly, a steady stream of new talent, new sounds, new ideas attract passionate new audiences to join in the good times.

The new book is available in Fayetteville via the Washington County Historical Society at 118 E. Dickson and is also for sale at Amazon.com.

We got in touch with Campbell to learn more about the book, and she was nice enough to answer some questions for us.

Tell us a bit about your involvement in the music scene over the years, and how this book came about.

My roots in music go back generations. My dad’s dad played fiddle and so did my dad, old breakdown tunes that most everyone could play back in the 1920s and ‘30s. But piano fascinated my Dad and even though he gained a master’s degree in music and taught public school band for over forty years, he never gave up his love of piano. That became a second career for him, not as a player but as a tuner/technician. So after I graduated with a degree in English and Music and quickly learned school teaching was not for me, I joined my dad in the piano business. We soon grew out of the family garage and found a place to rent so our business could expand. Today, that rental building serves as Backspace.

After gaining possession of those old buildings including the Quonset hut [which is quite a story by itself which I tell in my 2019 book, Adventures in Real Estate], I found a strong market for bands needing rehearsal spaces. That was around 1989 and it started with Paul Boatright and Punkinhead. Through the ‘90s, there was always a waiting list for bands wanting space, but the spaces were never quite adequate. So when I had a chance to buy another property out on Huntsville Road, I remodeled the building and created Huntsville Road Studios with 16 state-of-the-art practice spaces – high security, central heat/air and humidity control, soundproof to the outside. I moved the bands from the Quonset property to the new studios in 2006. Sadly, for a variety of reasons, I sold the new studios in 2018 and I think—I hope—it will continue to serve bands far into the future.

So yeah, bands. Coming, going, breaking up, reforming, the angst and drama, the individual struggles, the incredible talent and creativity—all that’s been upfront and personal to me for over 30 years. But strangely enough, that didn’t cause me to write this book. A longtime friend suggested I should write an article on my blog about some early ‘70s blues concerts at the UA campus. I started digging and Good Times is the result.

What is the rough timeframe of the music scene the book focuses on?

I’m just going to paste in here the book’s table of contents. The 19th-century chapter is about how the push for alcohol prohibition affected dance venues which in turn impacted live music. Also, it became obvious as I plowed into the band stories that affiliated industries like recording studios and music stores were integral to the live music scene.

As far as the music goes, I tried to list the band write-ups in the decade the group began. So for example with the Cates, they’re in the 1960s decade even though they’re still on the scene today. They actually started in the late 1950s as the Del Rays, but hey.

That time frame seems to cover a lot of time periods, and several scenes comprised of a whole host of genres. Do you think of the scene in terms of different eras, and if so, how would you define them?

I never attempt to categorize bands by genre. For one thing, I don’t know enough about genres. For another, I can only go by what someone says because I mostly have no personal experience hearing these bands. Also, bands may perform music that fits into more than one genre. Even ‘eras’ as a concept doesn’t work because bands may bridge eras. In many instances, bands didn’t exist long enough or leave enough information in the public record that I could really determine much about their music. My primary objective was to identify band names and member names and when possible their years of existence, plus any other details I could dig up about style, recordings, and reviews. I love research and even become obsessive about rooting out obscure details, but you can’t find information that’s just not there.

What’s become apparent since the book came out in April is that hard as I might have tried, I missed some information. Once word got out about the book, people I hadn’t been able to contact let me know details that I’d like to include if I do a second edition.

Tell us a bit about some of the more prominent acts bands that are featured in the book.

Ronnie Hawkins and the Hawks were one of the first local bands I heard about back in my club-going days. I learned a little about them over the years, but it wasn’t until I started working on Good Times that I learned the whole trajectory of that group and how that turned into The Band. It was a quirk that the group behind Hawkins got invited to back up Bob Dylan in his 1965 tour that made them famous and gave them their name as ‘The Band.’ Bands usually undergo complex transformations before they become ‘known,’ and that’s how Fayetteville’s Ronnie Hawkins ended up being the person who started The Band.

The Cates (Cates Gang then Brothers then Earl and Them), Windy Austin (first as Rodeo, then as Zorro, etc) – those are but two of the Fayetteville bands that have left their mark on the bigger music scene, and it wasn’t just bands. Plenty of individual musicians who started in a local band ended up in groups that became famous in places like Austin, Memphis, or other hot spots. That’s how it’s been for lots of Fayetteville bands – the drummer quits or the lead guitar starts another group or the guitarist/songwriter moves. I can’t even begin to list here all the ‘prominent’ bands and musicians featured in the book. That’s why there are 552 pages!

A new building in downtown Fayetteville picked up some national...