Hatchet Hall: A Piece of Women’s History in Eureka Springs 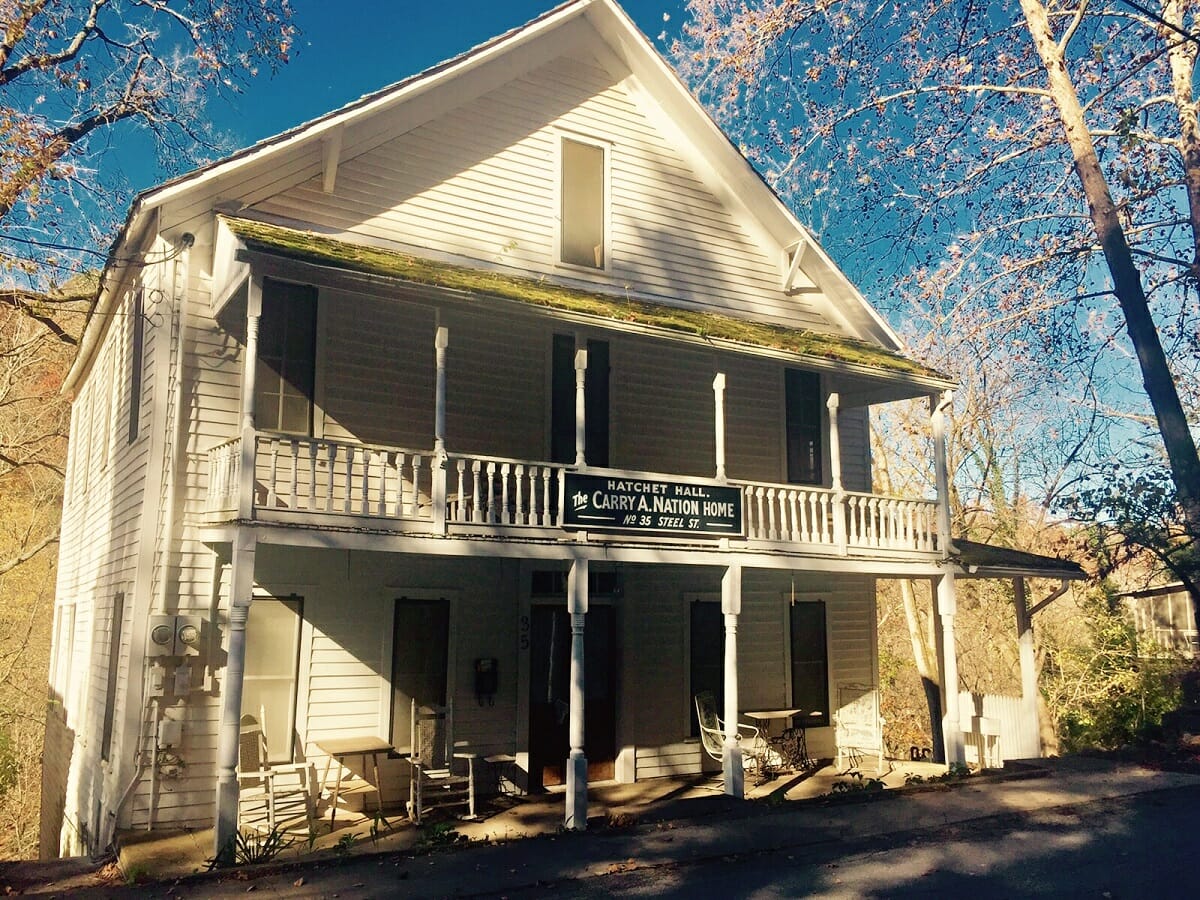 The women in my family, like so many people, have a love affair with Eureka Springs. We adore the houses, the shopping, and the haunted stories. But during one of our girls’ weekends, we decided to get off the beaten path of Spring Street, and drive through the little winding roads in and around the historic district and outside the town. We found tiny gingerbread homes quietly minding their business, hidden deep in the trees. We saw yard shrine displays made up of Madonnas, hundreds of blue bottles, and plastic baby dolls. There were numerous springs we’d never seen before, and on this weekend of exploration, we also discovered Hatchet Hall.

It was a modest white clapboard house nestled among the trees, and like so many of the other houses in Eureka Springs, clinging to the side of a mountain. The simple plaque on its porch read, “Hatchet Hall. The Carrie A. Nation Home. No. 35 Steel Street.”

This particular abode caught our attention for two reasons.

One, it was plain and non-assuming, unlike so many of its more colorful and gingerbread adorned neighbors. Like a plain swallow in the middle of a flock of flamingos, its simplicity was, in fact, what made it stand out all the more.

The second reason it snagged my particular attention was because as a lifelong Stephen King fan, my eyebrows shot into my hairline at the idea of a house named Hatchet Hall. But as it turned out, Hatchet Hall had nothing to do with a bloody battle or murder mystery. It was the former home of Carrie Nation, one of the most influential (and eccentric hatchet-wielding) members of the Women’s Christian Temperance Union.

I didn’t know that much about her at the time, but inspired by her colorful and slightly scary house name, I went home and began to research. I’ll admit, I’ve always found the notion of the Temperance Movement to be a bit of a buzz kill. I am, after all, very partial to my wintertime hot toddy.

But, as I researched more, I realized there was far more depth to the Temperance Movement than just the subject of alcohol. For the women in this movement, their real battle was against what alcohol stood for, and the ramifications it had on the lives of women.

Carrie Nation and her hatchet gained great notoriety beginning around 1900 as she began to travel through Kansas using said hatchet to do battle against any establishment that sold liquor. She rolled whiskey barrels into streets and set them on fire. She broke windows and mirrors inside saloons. She gave sermons and speeches, describing herself as “a bulldog running along at the feet of Jesus, barking at what He doesn’t like,” and gained nationwide notoriety. She serenaded saloon patrons with hymns and greeted bartenders with remarks like, “Good morning, destroyer of men’s souls.”

And while I had to tip my hat at Mrs. Nation’s flair for the dramatic, it’s perhaps easy to view historical figures in one dimension, and I kept wondering, “What could have possibly motivated her to this extent?”

Carrie’s first marriage was to a doctor named Charles Gloyd, who her parents did not approve of because of his alcohol consumption. Their only child, Charlien, had a mental disability that Carrie blamed on Charles’ alcoholism. She left him, and he died a few months later.

Her second marriage to David Nation was, according to the history books, not idyllic either. It was filled with strife and arguments, and it ended in divorce. It was around that time that Carrie began her crusade for the Temperance Movement.

She railed against the domestic violence and monetary instability women dealt with from the effects of husbands deeply ingrained in alcohol-driven lifestyles. When I began to look at this situation through the lens of a world where women had very little power, very little ability to support themselves, no voting rights, and all the while trying to make the best of a situation with husbands who spent the family’s earnings on alcohol, and then came home drunk and angry, Carrie’s extreme crusade began to make a little more sense.

When I factored in her first alcoholic husband, not to mention her second failed marriage in a society where she no doubt would have struggled as a divorced woman, it made a lot of sense. She wasn’t just fighting against alcohol. She was fighting for women’s rights.

Nation was arrested numerous times across several states. She was twice incarcerated here in Arkansas during the winter of 1907, once in the Pulaski County Jail, and once in the Garland County Jail. But despite being jailed, Carrie was also paid to speak at events in the Natural State, where she sold souvenir hatchets and went on a tour through Arkansas saloons.

At the age of 60, Carrie retired to Eureka Springs. She stated that she loved that region of Arkansas because it reminded her of Scotland. She used her home, Hatchet Hall, as a boarding house and school, as well as a reported haven for battered women. Her last speech was given in Eureka, and when she stopped she gasped, “I have done what I could.”

After discovering Hatchet Hall that day in Eureka Springs, and all my subsequent research afterward, I found myself greatly admiring Carrie Nation. While she and I might have had differing opinions on the gravity of a glass of wine, I find myself in awe of how much she did with so little power, zero voting rights, and as a divorced woman in a time when females were second class citizens.

I have immense respect for Carrie, her love of Arkansas, and her hatchet.

One response to “Hatchet Hall: A Piece of Women’s History in Eureka Springs”