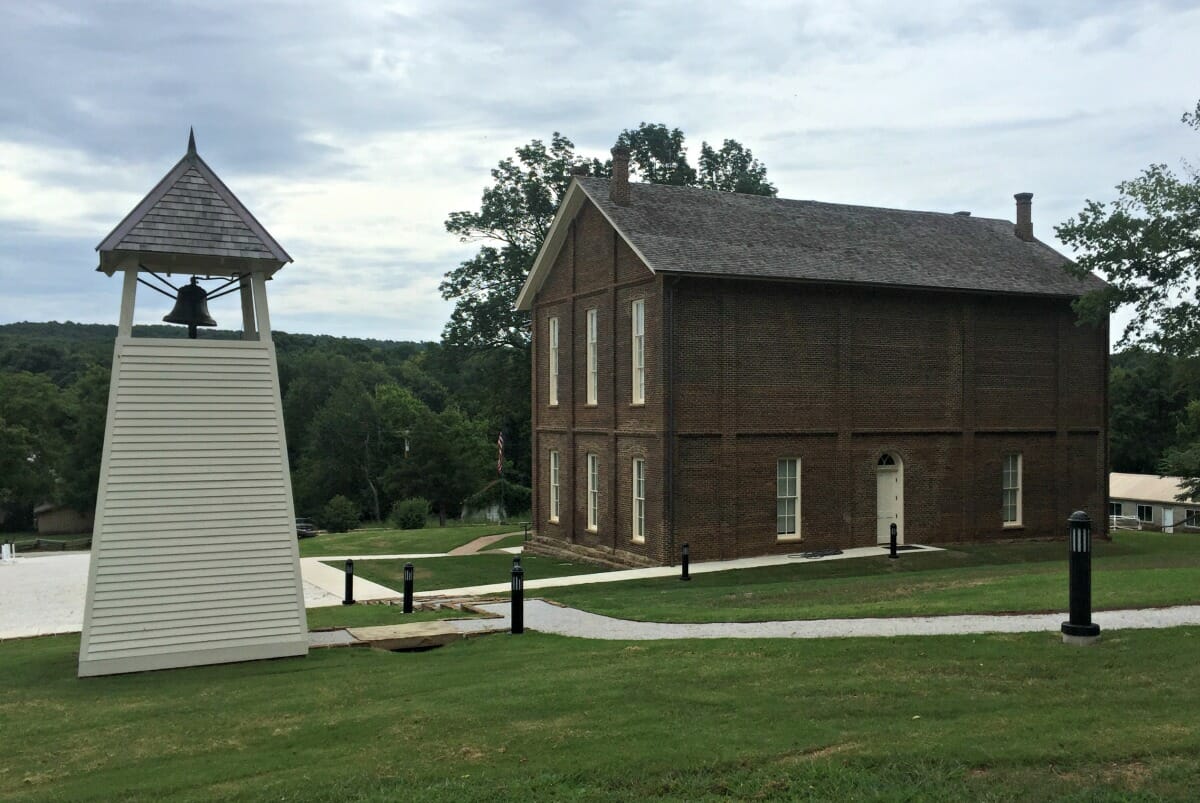 In 1827, a group of Cumberland Presbyterian settlers arrived in Northwest Arkansas. They came from “back east,” mainly Tennessee, to set up congregations in frontier Arkansas. These settlers established the small community of Cane Hill in the beautiful, rugged hills of the Ozarks and it quickly became a vibrant hub in the area for education, farming and business.

The settlers brought apple seeds with them and planted the apple orchards that would soon bring a measure of prosperity to the region. Cane Hill was the original center for apples in Arkansas. As the area grew, so did business opportunities. The Edmiston family became prominent within the community. Zebulon Edmiston started several businesses, including the general store and the canning and evaporating company, which preserved the apple harvest mainly through drying the apples. Zeb’s sons, James, John and David, all helped run the family businesses.

The first school was established in 1834 to accommodate the growing families in the area. In 1850, the school became Cane Hill Collegiate Institute and began awarding high school diplomas. It moved from the north end of Cane Hill to a central location on a green hill just above the main part of town. In 1852, the school won approval from the state Legislature to award four-year college degrees and changed its name to Cane Hill College. Cane Hill Female Seminary was founded at the same time, south of Cane Hill in nearby Clyde. Cane Hill became an important center for education for both men and women in the 1850s, but the Civil War temporarily forced the college to close.

On Nov. 28, 1862, the war came to Cane Hill. The Confederate army had established itself in Van Buren, but it made supply runs to Northwest Arkansas. Brigadier General John S. Marmaduke and his company were there looking for supplies. Union Brigadier General James G. Blunt attacked and the Confederates ran. Union troops pursued in a running battle that crossed all over Cane Hill and the surrounding communities as the Confederates fled to Van Buren. General Blunt then took up residence in the Methodist Manse in central Cane Hill until the Battle of Prairie Grove occurred in December.

This wasn’t the only run in with the war that Cane Hill’s residents experienced. The second would be far more damaging. Two years later, in 1864, General Charles R. Jennison and the 15th Kansas Volunteer Cavalry passed through Cane Hill and burned much of the community. They also lynched three citizens. Jennison’s Jayhawkers committed many atrocities in Northwest Arkansas and Jennison was court-martialed and dishonorably discharged from the army in 1865. That wouldn’t help the citizens in Cane Hill, though.

After the war, people came together to rebuild the town. Cane Hill College reopened in 1865 as a co-ed institution, the first in the state to educate college men and women together. The college operated 11 years, and then a disgruntled moonshiner burned it down after being run out of town by the strict, mainly Cumberland Presbyterian citizens. The citizens again rebuilt Cane Hill College, this time as a magnificent two story, red brick building with large windows to allow plenty of light into the rooms.

Unfortunately, by this time, Cane Hill was declining as a trade center. The railroad had arrived in Arkansas, bypassing Cane Hill for Prairie Grove and other parts of Washington County. The apple business shifted away from the area, and the University of Arkansas in Fayetteville became the center for education. Cane Hill College closed in 1891, although the Cumberland Presbyterians moved their university to the current University of the Ozarks in Clarksville.

Cane Hill remained a small but active community in the 20th century. Eventually, the college building, the Methodist Manse, and many other buildings that held historical significance to the town began to fall into disrepair. A few efforts were made to preserve the college building from further disrepair by organizing the Cane Hill College Association. In 2013, it became Historic Cane Hill, a 501(c)(3) organization. That’s where Bobby Braly stepped in.

Braly grew up in nearby Lincoln, with ties to the Cane Hill area. His grandfather was one of the orphan train riders who stepped off the train in Prairie Grove and ended up in Cane Hill. Bobby moved back to Northwest Arkansas from Knoxville. With his background in archeology and teaching, plus his local knowledge of the area, he was a great choice to lead the charge in restoring Cane Hill.

There are 16 properties in the Cane Hill area on the National Register of Historic Places. Historic Cane Hill moved to purchase several of these properties that were all but abandoned, including the Methodist Manse. The college building needed serious repair, beginning with the foundation. They also wanted to restore the Cane Hill drug store and bank.

Bobby and his team moved quickly to stabilize the properties that were in danger of crumbling, including the college. Since 2013, the group has fully restored the drugstore, manse and college. Remember Zeb Edmiston and his sons? Each of them built Victorian era homes and these are also part of the project. They have been stabilized, along with the former bank building and Shaker Yates Grocery store. The group is in the process of restoring the Dr. Bean House, home to one of the earliest country doctors in the area.

The effort to restore Cane Hill College took place in three parts: the foundation, the exterior and the interior all needed attention. After stabilizing the building, the group worked from a photo of the college in 1886 to restore the exterior to the original look, complete with a wood shingle roof and beautiful arching windows. Inside the college, Braly chose to restore the building to its appearance after its “remodel” in 1931. The result is breathtaking. The wooden floors gleam and light flows through those tall, arching windows.

Braly’s vision for the restoration wasn’t just to take the college back to its original look. He wanted to create a space that could be utilized by the community today. With that in mind, the restored Cane Hill College is now an exceptional event venue. It boasts a full kitchen with a double convection oven for catering events, rooms that are equipped for AV use, and a fully restored auditorium and stage perfect for weddings and other large events. The green hills, sugar cane and black walnut trees provide a beautiful backdrop, especially as the sun sinks behind the western hillside and sends rays of light spreading across the Historic Cane Hill site.

The restored Shaker Yates Grocery building now houses a museum dedicated to the history of the area. A tour of Historic Cane Hill should begin here, with the Methodist Manse, the Bank of Cane Hill and A.R. Carroll Drugstore close by. The drugstore was restored to its original wood floors and pressed tin ceiling. It also functions as a small events venue and has rentable office space on the second floor.

After visiting the main street portion of Cane Hill, head over to the 1.8-mile walking trail that takes visitors up to the college building, around the grounds, and by many of the properties on the historic places register. Posted signs help guide your way. You can also schedule a guided tour in advance.

Cane Hill is 19 miles west of Fayetteville. The museum is open Wednesday through Saturday from 10 a.m. to 2 p.m. but you can walk the trail at any time. One of the best times to visit is during the Cane Hill Harvest Festival, held the third weekend of September. Find Historic Cane Hill on Facebook and visit the website to read more about the buildings or how to rent the drugstore or college for an event. Whether your trip is to brush up on local history or attend an event, you’ll enjoy a restored area that brings the past and present together.