Marshallese in Arkansas: from the Islands to the Ozarks 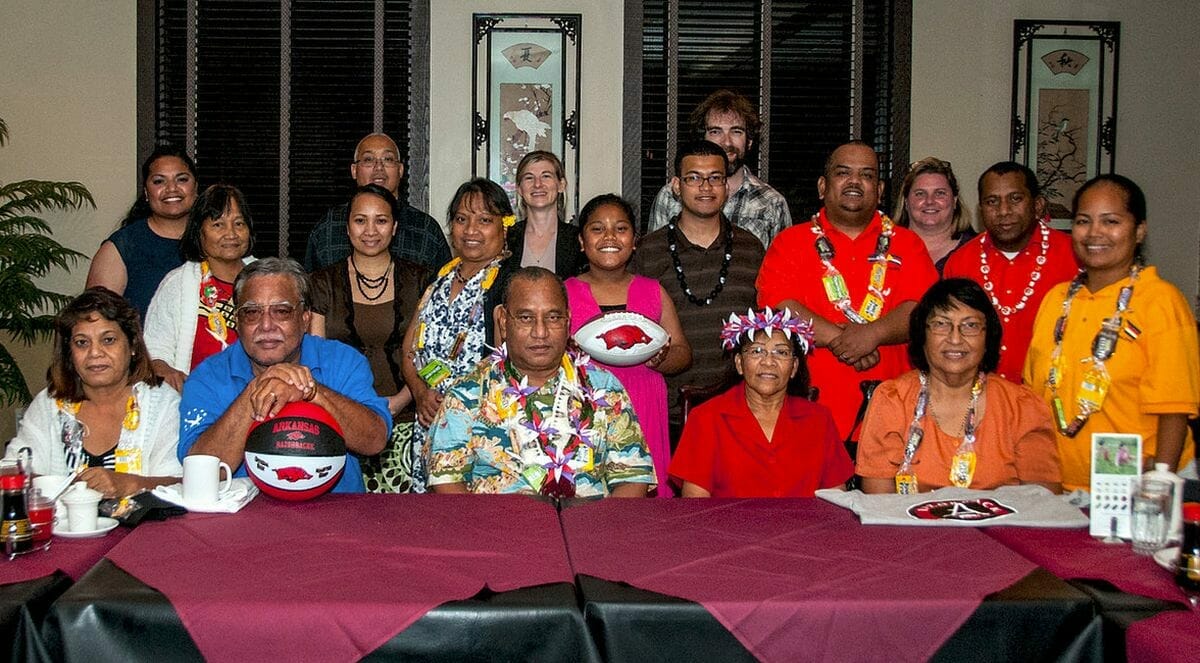 May is Pacific Islander Heritage Month, and one of the largest communities of expatriates from the Republic of the Marshall Islands (RMI) lives right here in Arkansas. North of the equator in the Pacific Ocean, a collection of 29 atolls and five islands make up the RMI. The sun-soaked 750,000 square-mile nation is located 6,183 miles from Springdale, home to the largest community of Marshallese nationals in the continental U.S. In fact, approximately 30% of RMI citizens reside outside of their island home, and half of those are in the Midwest.

When the United States ended its twelve-year nuclear weapon testing program on several of the atolls in the RMI, the nation of around 50,000 people suffered greatly from the after-effects. Irreparable damage had been done to the island ecosystem, including the destruction of vegetation and fishing habitats. Additionally, radiation poisoning of islanders located downwind of the Bravo Shot test in 1954 was severe enough to affect subsequent generations in the form of congenital disabilities and chronic disease. The Bravo Shot detonated with 1000x the nuclear power of the bomb dropped on Hiroshima, Japan.

A 2004 study conducted by the U.S. National Cancer Institute study found the entire nation remains affected by radioactive fallout to this day. After the testing ended in 1958, the Marshallese people were forced to rely on the same country that ruined their home to provide support. The processed foods shipped to the RMI to replace the fresh produce and fish that were no longer safe to eat led to health problems. When COVID-19 hit the Marshallese community in Springdale last year, these problems worsened. Marshallese individuals fell ill and died in disproportionate numbers compared to other groups in NWA.

With a history of colonization that goes back to the 1500s, the people of the RMI are nothing if not resilient, and eventually, they achieved political sovereignty. A constitution was adopted in March 1979, and the Compact of Free Association (COFA) was signed with the U.S. in 1986, which settled all claims stemming from the nuclear testing on the islands.

In 2003, the COFA was renegotiated to include a $70 million trust fund and grants, as well as access to other programs and services provided by the U.S. and the ability to travel to the U.S. with just a passport. Marshallese children born in the U.S. are now U.S. citizens. They can access all the benefits that conveys, such as the right to vote.

Marshallese individuals and families have been emigrating to northwest Arkansas from the RMI and other parts of the U.S. since the 1980s. News spread there about the low cost of living and access to plentiful jobs in the poultry industry. The unemployment rate in the RMI is around forty percent, with their GDP near the bottom in the world. According to the Marshallese Educational Initiative (MEI), 30% of Tyson Foods’ workforce comprises people from the RMI.

An RMI consulate located in Springdale serves the community of approximately 15,000 in the city and surrounding area. Approximately 3,300 Marshallese students attend the Springdale School District. Local elected officials have worked to make sure young people who have been raised here can access educational and employment opportunities beyond their K-12 years. Recent efforts include allowing Marshallese citizens to serve their community as police officers. They already serve in the U.S. Armed Forces.

Other Arkansas towns that have welcomed people from the RMI include Pine Bluff, Huntsville, Berryville, and Pocahontas. Additional communities exist in Enid, OK, Salem, OR, Spokane, WA, Dubuque, IA, and the Hawaiian Islands.

The Marshallese culture encourages the idea of “what’s mine is yours.” At home on the islands where many people live on relatively small pieces of land, sharing resources, homes, and even the responsibility of caring for children is common. In the U.S., that looks like extended family members sharing homes that most Americans would consider too close for comfort. The desire to help those in need is strong in Marshallese culture. This was clearly evident over the last year as their community suffered during the pandemic.

These close connections with elders and cousins are a breeding ground for joyous celebrations in a relatively small, tight-knit community. Marshallese people are very devout, spending much of their time with each other in church activities. On Memorial Day, they gather from around the country in Springdale to celebrate Constitution Day. Their families gather and participate in various sports tournaments.

The Marshallese also have a rich culture of the arts and music. Expatriates continue those traditions here in the U.S. They teach young people their heritage through classes and events hosted in the community.

Looking Ahead for the Marshallese

The newest threat to the Marshall Islands is climate change. Among the 29 islands and atolls of the RMI, the highest elevation is only 6 feet above sea level. Rising sea levels and storms caused by climate change are increasing in frequency and severity. This poses a great risk to the nation. The capital city of Majuro already deals with flood-level tides.

In addition to infrastructure damage caused by floodwaters, the higher-than-normal tides contaminate freshwater supplies with seawater. Studies have shown much of the land in the RMI will be uninhabitable within a generation. The MEI was one of the first organizations in the world that linked atmospheric damage from nuclear testing to the current threat caused by climate change. They support ongoing efforts to rebuild and protect coastlines and implement sustainable living practices on the islands. They hope this will prevent or delay the destruction of their homeland.

Further Reading about the Marshallese

Here are some links with further information about the Marshall Islands and their people:

Encyclopedia of Arkansas’ entry about Marshallese in Arkansas.

Learn more about the legacy of the nuclear program undertaken in the RMI by the U.S. between 1946-1958.

Article about the restoration of medical benefits stripped from Marshallese people in the U.S. in a 1996 budget during the Clinton administration.

Watch videos that are part of the Marshallese Oral History Project here.

Images used for this story courtesy of the Marshallese Educational Initiative.

4 responses to “Marshallese in Arkansas: from the Islands to the Ozarks”